The king of Irish investigative journalists, Paul Williams, will join forces with the Irish News of The World on March 10 [2010] as its crime editor.  The clamorous controversy about his departure from the Sunday World is indicative of how he has become the indisputable media godfather of crime reporting.  But  does “the journalist of his generation”, as his friend Joe Duffy has branded him, really believe that his so-called courageous crime reporting is constructive in preventing crime in Ireland?  Between May and September of 2009, I investigated how Williams’ subjects – young Irish males convicted of violent criminal offences – interpret his sensational crime reports.  I conducted research (comprising questionnaires and one-to-one interviews) with a total of thirty convicted young offenders aged between 16 and 21 years old, all of whom are currently serving prison sentences in a well-known young offenders’ institution.  While much of what they say may be considered misapprehension, the misapprehensions are nonetheless real and dangerous.  I found that these young offenders are being inspired by what they see as glorification within Paul Williams’ reporting, and consider themselves consequently, to be the ‘criminal masterminds’ of their generation.

The prison co-ordinator told me, “Most of the lads in here come from low socio-economic backgrounds:it is not an excuse but it is a fact.  Their prison sentences range from a couple of months up to couple of years, depending on the severity of the crime committed.” He added, “The majority of the lads will re-offend and probably end up in Mountjoy prison several times throughout their lifetimes.  Very few go on the straight after they leave here”. 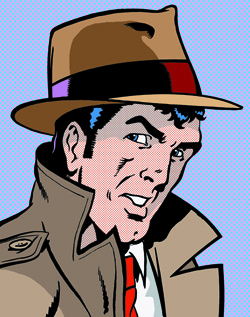 Whilst ‘right thinking’ members of society may interpret Williams’ sensational crime writing as ‘naming and shaming’ for the greater good, this research revealed that the criminal mind identifies this weekly media exposure as more of a case of ‘naming and faming’.  The prison coordinator also told me that: “There is a huge appetite for Paul Williams’ crime writing amongst the prisoners.  All the politicians and journalists seem eager to crack down heavy on the act of crime but few are interested in tackling the root causes…  Most of the lads are streetwise but as you can see for yourself it is a misconception to think these lads are ‘criminal masterminds’”.

The young offenders highlighted the ways in which Paul Williams glorifies gangland criminal, “You know you are up there with the best if Paul Williams calls you a ‘crime boss’ or gives you a nickname, that makes people more afraid of you.  That can’t be a bad thing in the business of crime.  He makes us out to be like the mafia godfathers – most lads love it”.  They revealed how Williams’ crime-writing acts, albeit unintentionally, as a source of encouragement towards criminality.  “When Williams writes about guns, robberies and shootings, it’s exciting.  Everyone wants a piece of the action.  His books don’t turn me off crime they make me want to be part of it.  Why would I want to go on the straight?  It’s boring in comparison”.

Some of the young men serving time noted how Williams’ work risked being mistaken for promoting the ‘achievements’ of their criminal predecessors.  “Gerry Hutch is a celebrity now thanks to Williams.  All Gerry’s achievements are glorified, like getting away with the two biggest robberies ever in Irish history”.  Gerry Hutch is often known by his nickname of ‘The Monk’ he was the subject of investigation in the popular factual television series Dirty Money in which Paul Williams describes him as the “quintessential criminal mastermind”.  According to the young offenders who took part in this research Paul Williams’ crime writing serves to educate them about criminal activity.  “If prison is a villain’s university like Williams says on the [Dirty Money] DVD then it is his books that learns us the tricks of the trade”.  Another young man serving a prison sentence tells me, “To be honest Paul Williams’s books are the first proper books I have ever read in my whole life”.

The most startling issue raised by the young offenders was the way in which – presumably unwittingly – Paul Williams risks his writing being used as a reliable source for their next gangland hit.  “He is actually adding fuel to all the gun crime because the boys get paranoid over his stories and then they start shooting each other”.  Other convicted criminals revealed their disgust at what they see as the misrepresentation of criminality portrayed by Paul Williams’ sensationalist reportage.  “If he cared about stopping crime he would write about how shit it feels to be locked up.  Crime should be made out to be a crap life because that’s what it is –Williams makes it out to be glamorous to everyone, but it’s not like that when you’re counting your days inside here, or looking over your shoulder when you’re on the outside.  Why doesn’t he write about that? Does he honestly think we want to be killing each other? It’s stupid”.  Another young man unhappy with Williams’ interpretation of the world of violent crime says, “I was brought up around all this shit so like it’s just normal to me.  Williams just makes people more afraid of lads like me, which will make it harder for me to go on the straight when I get out of here”.

At least – according to some of those that contributed to the research – despite one hoax attempt on his life, Paul Williams is not in danger from gangland criminals.  “He wants people to think he is in danger – that is part of his act.  He will not get shot because even though we don’t like admitting it, he’s doing us a fuckin’ favour”.  The young offenders highlighted how Paul Williams indirectly advertised the Viper’s debt collection business.  Martin ‘The Viper’ Foley is one of the criminals frequently featured in Williams’column.  ‘The Viper’ has approximately 43 convictions and there have been several alleged attempts on his life including being shot on five different occasions.  In a bid to shake off his criminal past ‘The Viper’ opened up a legitimate business which is registered as Viper Debt Recovery and Repossession Service Ltd.  Unlike most other European countries, Ireland has no regulation or specific legislation governing the debt collection sector, meaning anyone can set up a debt collection agency.

One young offender taking part in the study laughed, “Sure the Viper’s debt collection business must have been happy with Williams for the two-page advertisement.  If someone owed you a hundred grand, who would you hire to make sure you got your money back?”.  A Carlow businessman admitted to using Mr Foley’s services because debtors refused to cough up the money they owed to him.  He also said that he now no longer uses Viper Debt Recovery and Repossession Services because all except one of his debtors have either paid, or made arrangements to pay.  Other interviewees spoke of the pride on Sunday mornings when their criminal activity was written about by Paul Williams.  “It’s entertaining especially when you know what happened.  We’d get the paper every Sunday and laugh about it.  I think everyone gets a kick out of being glorified in the paper, but they don’t…admit it”.  Another young man said, “If Williams cared he would go hard on the gardaí for not arresting the boys who are killing the innocent people.  Wouldn’t he? Instead he just keeps the pigs sweet”.

The findings of my research pose many serious questions with regard to the sensationalist crime reports that currently dominate the media sphere.  It begs the question, to what extent might Paul Williams have become the media godfather of crime, and as such could he be a quintessential, if inadvertent, instigator of that very crime?  Has Paul Williams constructed a psychological arena in which Irish criminals are performing for him – eager to be commemorated in history like their criminal forefathers? The extraordinary crimes of Martin Cahill are recorded in Williams’ book The General, “In death, as in life, Martin Cahill has made his mark on history,” he is “a man who was the undisputable godfather of the Irish criminal world.” Paul Williams’s crime writing cleverly exploits both the perpetrators, as well as the victims of crime.  His agenda-setting journalism is at the heart of media hegemony, making Paul Williams both politically influential and himself untouchable.