The government is preparing a ‘Plan’ for the development of the country. It is intended that ‘the Ireland 2040 Plan’ will be a “high-level document that will provide the framework for future development and investment in Ireland. It will be the overall Plan from which other, more detailed plans will take their lead, hence the title, National Planning ‘Framework’, including city and county development plans and regional strategies. The National Planning Framework will also have statutory backing”.

The most noticeable thing is that “statutory backing” means nothing. A plan gets “statutory” backing just by being mentioned in legislation. A meaningful plan should be ‘mandatory. For example legislation might require government agencies and local authority plans to merely “have regard to” the plans referred to in the legislation. It needs to require them to comply with and implement those plans.

The first thing would be to work out the criteria that would dictate the plan. It’s notionally accepted that these should be criteria that conduce to “sustainable development” that is development that meets the needs of the present without compromising the ability of future generations to meet their needs too. It’s a good definition and a good goal. The starting point in assigning the earth’s stock of resources must be to minimise their depletion. The nuts and bolts of sustainable development are taken to mandate equal attention to economic, social, environmental and perhaps cultural agendas.

The goal of society in our post-religious times is quality of life, even if many use an inept surrogate, Gross Domestic Product. Sustainable development conduces to quality of life, over the long time. If anyone decides to bother it can be measured to ensure its promotion – unemployment rate, inequality measured by the Gini coefficient, water quality, number of opera houses etc. Planning can be seen as a machine for improving quality of life – if we want to. 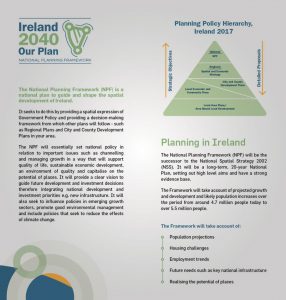 The upshot of this for this State is a policy imperative for balanced regional development, with the nature of the balance being determined by the economic, social, environmental and cultural imperatives.

Economically there is an imperative to develop Greater Dublin, particularly Dublin itself. We live in a foolish world where economics is supereminent, particularly among policymakers, many of whom particularly at local-government levels are promoted almost exclusively because of their performance on economic matters. Environmentally too, it is arguable that if we concentrate development around the capital, it tends to free the much bigger rest of the country from the ecological depredations that characterise human activity, at least in the early part of the twenty-first century. It is also, on the other hand, arguable that environmental imperatives suggest pre-existing infrastructure, and the energy embodied in its manufacture, should continue in use. In any event, socially it is regressive to force people to live away from their communities.

So what does this mean in practice in Ireland?

First, there must be a plan and it must be implemented. The last plan, the national spatial strategy (2002-2020) had no teeth and was not implemented. Most development was sprawl for Dublin and one-off housing in the countryside. With its cynical use of the loaded term statutory rather than the more practically important term “mandatory” there is no evidence the Government has learnt the lesson. Unfortunately existing development patterns suggest we can look to more of the same.

However what we need is development to counteract Dublin. Realistically this must attract the development that otherwise would occur in Dublin, particularly high-tech, high-paying companies that seek sophisticated, urban settings for their workforces. This suggest we need to look to divert development that otherwise will take place in the hinterland of Dublin to cities outside Dublin, including Cork, Galway, Limerick, Waterford and perhaps a new city in the midlands. This probably necessitates shifting government expenditure to these cities, though not in the ad hoc way Charlie McCreevy attempted in the early 2000s. Citizens too may have to be incentivized through tax incentives for sustainable developments in the right areas. We might remember that if a policy is worth legislating for it is worth also pursuing through fiscal measures.

Beyond this there are other imperatives: for social reasons stated no area should go into decline and for environmental and social reasons people should live near to their workplaces . The market must therefore similarly be stacked to promote the development of existing towns and villages, the next two layers down from cities. Of course new energy in the cities outside Dublin would generate its own knock-on effects in local towns and villages.

Finally then least sustainable development of all is one-off housing (apart from people who live and work on the land) as it cannot be served by public transport, requires disproportionate costs in servicing such as postal and electricity services and risks disengagement as populations age and cannot leave their isolated homes.

It’s fairly simple and logical: incentivise people to live in cities outside Dublin; regulate against development in Dublin’s hinterland (though development in Dublin itself, particularly high-density developments in areas like docklands in the city centre is fine); ensure towns and villages don’t decline; eliminate new one-off housing.