The Bill envisages the establishment of a not-for-profit co-operative to purchase large volumes of mortgages currently on the books of Irish lending institutions, that are in arrears. It is envisaged as an off-balance-sheet self-funding initiative, a special purpose vehicle with the intention to purchase 42,000 homes currently in arrears of more than one year. €14bn of assets for a marked-down value of €5bn.

The overarching intention is to “keep owners and tenants alike in their homes” out of an overheated private rental sector and to help prevent further homelessness. To put the initiative in context, it is useful to remind ourselves of the current housing status. 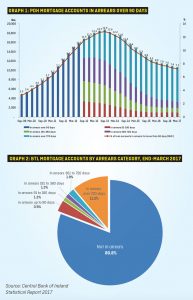 A March 2017 report by the Central Bank confirmed the scale of Ireland’s mortgage distress: one in ten mortgages (76,422) are in arrears over 90 days of which 33,447 were in arrears for more than two years. Out of this 14,367 are ‘Buy-to-Let accounts. Despite this, the current rate of repossessed properties disposed of was relatively low at 210 in the first quarter.

Homeowners in arrears are facing a ‘perfect storm’ – on the one hand very low levels of new home supply give a net loss of overall housing stock and contribute towards historically low levels of rental properties. On the other there is a recovering economy, net inward migration of over 34,000 people per annum and increasing levels of household formation. The Housing Agency suggests there is a demand for 81,000 additional homes by 2021.

The Central Statistics Office confirmed that, when all factors were taken into account, the total stock of housing increased by just 8,800 in 5 years. Sharp sales price and rental inflation in the past three years confirms that demand dramatically outstrips supply, even with 32,000 vacent and so-called ‘ghost estate’ homes having been brought back into habitable use since 2011. For owners and tenants facing repossession, options are limited.

The average sales price of a new three-bed home in Co Dublin on a greenfield site is €360,000. Purchase at this price requires a combined household income of over €100,000. There is no official definition of ‘affordable’ housing at present, no affordable housing scheme and no official intention of introducing one. Legislation underpinning the previous affordable housing scheme was revoked and any new initiative would require a legal framework to be developed.

State infrastructure funding of €240m has been announced and will subsidise infrastructure for a number of housing sites (LIHAF). The intention is to aid delivery of 23,000 new homes in a five-year period. However, there are no legal agreements in place with developers in receipt of LIHAF funding for affordable housing, and given the lack of clarity on what an affordable unit is, especially its price, it is unlikely that any family homes below the maximum affordable price limit of €290,000 will be provided.

Officials talk of an ‘affordable dimension’ to the infrastructure initiative and the assumption is that additional new homes will reduce prices to affordable levels. Detailed analysis of Central Statistics Office (CSO) data confirms that increased new-homes supply follows increases in price and rent, and that over a 40-year cycle increasing supply has not once reduced prices.

There are 3,100 available rental properties nationwide, just 1,300 of them in Dublin. This is the joint lowest level on record. All demand indicators point towards entrenched double-digit house price inflation in the short term, and even with a recently introduced cap, rent increases of over 7% per annum.

There is an unprecedented level of homeless families in Ireland at present . Typically these are households left behind by the country’s recovery that, for various reasons, simply cannot afford higher rents. Officials are quick to point out that over 3,000 people exited homeless temporary accommodation last year. However Father Peter McVerry has confirmed that in 2016 there was a net increase in homelessness of 1,000 people, confirming that the rate of people entering the homeless system is currently at 4,000 per annum.

To improve balance sheets, lending institutions may accelerate the sale of large tranches of distressed home loans to investment funds – so-called ‘vulture funds’ – as there is good demand and sale-price inflation approaching 10% . As many vendors require ‘vacant possession’ for sales, sales of 20% of the mortgages in arrears for two years or longer may result in a significant distortion of the rental sector. Owners and tenants-in-arrears will enter a volatile rental sector while their original properties become temporarily vacant during the sales period. Given the current historically low level of available rental properties this has the potential to drive up rents into double-digit figures and to increase the net numbers of families entering homelessness by up to 5,000 persons per year.

It is against this bleak backdrop that The National Housing Co-Operative Bill 2017 has been proposed. By purchasing existing arrears properties for an average of €120,000, owners and tenants could be kept in place for less than €600 per month. This figure is less than half the current Housing Assistance Payment (HAP) level for a two-bed property in County Dublin. Off-balance-sheet bond-funding-mechanisms have been in place, agreed by Government, for a similar if more modest initiative, since 2013.

The five-year target for ‘Rebuilding Ireland’ is 47,000 homes in five years. Of this 32,000 are to be rental or long-lease properties. This ambitious housing target could be achieved in a short time with the National Housing Co-Op proposed in the Bill.

A gulf exists between the official ‘affordable dimension’ concept, official housing data and the reality of a massive mortgage-arrears problem paired with a private-rental sector spinning further out of control. This Co-Operative proposal will close this gap. Management of large-scale affordable housing is the norm in European countries: legislation regulating co-ops has been in force since 1893 and 1800 Co-Ops manage 6 million homes in Germany (30% of all rental housing).

The housing crisis is a stark reminder that the private-housing sector cannot be left to regulate and manage itself. Official inertia towards looming mortgage arrears could lead to further distortion of our already distressed rental sector and a massive increase in our current high level of families descending into homelessness for the first time.