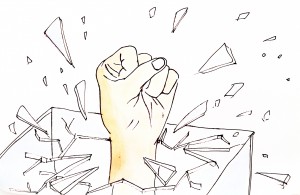 The “glass ceiling” is alive and well in the business sector in Ireland. A survey carried out by the Irish Times (2014) of the Top1000 Businesses in Ireland found that only 25% of the c-suite jobs (jobs with the word “chief” in it) were held by women. 11% of the CEOs and 16% of the CFO positions were held by women.  The average of 25% is skewed as a result of “feminised” senior management team roles. 55% of the women were Heads of Marketing and 67% of women were Heads of Human Resources.
A survey of Irish International NGOs in 2012 by Niall O’Keefe demonstrated that they employed 4,246 staff nationally and internationally, and that 59% of these staff were women. 51% of management-level positions and 30% of CEO positions were held by women. There is a broad range of Irish International NGOs working to address underdevelopment in Southern countries.  Typically their core values are to support and promote equality and empowerment of women, as drivers of development. Based on my personal experience working in Ireland and overseas I decided to research this discrepancy between the values held at Field Office and Head Office and the glass ceiling that is indicated by O’Keefe’s research.
A number of themes to explain this discrepancy emerged from questionnaires completed by women at all levels of employment within the sector, and from a small number of interviews with women staff in middle- to senior-management jobs.
Gender equality is an organisational objective so it is not surprising that 64% of respondents were familiar with gender policies in their organisation. A further 69% maintain that gender equality is promoted at Head Office level. Yet, when asked if  “Women with many skills and qualifications fail to be recognised for promotions” 64% of respondents said yes. A number of respondents’ comments suggested that; “Organisational policies reflect gender equality, but practices do not”; “Gender equality is promoted in our work but it is not something that is followed  through” and “Gender equality is promoted but it is all lip-service” .
Family-friendly policies tend to be in place in head offices with flexible working hours and home working available. However, the costs of implementing them limited organisations’ capacity to offer a broad range of options.  One respondent commented that “structural constraints exist that hinder women from achieving what they should in a professional context. These structural constraints mean things like access to affordable childcare and flexible working environments”.
Organisational culture was considered a limiting factor, often being classed as “masculine”, “male heavy”, and in some instances both “paternalistic and maternalisitic”. There was prevalence towards the “think manager, think male” paradigm in the sector. 64% of respondents agreed it would take decades for women to reach equality with men in high-level-management positions. Respondents’ comments backed this up: “Men in senior roles have a bias against appointing women to very senior roles – partly because they want people like themselves, and partly because they are afraid of dealing with issues such as maternity leave and childcare”;“Men do not see me and other women as having the same potential for advancement as our male colleagues”; “It is a hierarchy at work and [because of] managerial chauvinism, only few women are actually able to gain promotion in certain circles”.
Both sets of data indicated that progression for women within these organisations is harder than for men, with a considerable influence in relation to having children.  An interviewee suggested that time off for maternity and childcare “inevitably has a negative impact on a woman’s career progression”. Respondents commented that [men managers] “assume that you will at some stage reproduce and so are not worth investing in” and “Basically as a strongly career orientated woman, taking time out to have my children really set me back. It was a choice, family or career”.
50% of the respondents who are mothers feel that maternity leave negatively affected their careers. Comments included; “I need to re-establish myself with the organisation having been away”; “I will have become ‘rusty’”; “I have lost progress on the career trajectory I was on”; and “Affected my chances of promotion on return”. Yet 52% of respondents maintained that motherhood is more important to most women than career development. Stark choices had to be made “I worry about having to make a choice between having children and progressing to a good position in my job, and thus have already made a decision in my mid 20s not to have children”.