In the UK General Election of May 7th, there is only a possibility of three of the North’s 18 seats changing hands. They are East Belfast, South Belfast, and Fermanagh and South Tyrone.

The Election also looks like being another stage in the weakening of the Ulster Unionist Party and the SDLP. The DUP and Ulster Unionists have made a pact in four constituencies. The DUP already holds one of the two seats where it got a free run, North Belfast: it is favourite to take the other, East Belfast. In return, the Ulster Unionists were given a free run in Fermanagh and South Tyrone, which will be an uphill struggle: and in Newry and Armagh, which is unwinnable by a Unionist.

East Belfast was the story of the last General Election in the North. Naomi Long of the Alliance Party prised a stunning victory. She was voted for by the spectrum of those who disliked DUP leader and First Minister, Peter Robinson. That stretched from Loyalist paramilitaries to Sinn Féin supporters. There is no evidence that Long personally made any deal with the Loyalist paramilitaries. However, some UVF figures mobilised votes for her.

Long benefited from a perfect storm that hit the DUP in 2010. Like many strong characters, Robinson has enemies. Five months before the election, one of Ireland’s juiciest ever scandals burst on him. Robinson’s 59-year-old wife, Iris, had procured loans for her teenage lover to open a restaurant. She had failed to declare her interest while a councillor on Castlereagh Council which had granted his restaurant permission.

Long is more muscular in her approach than the archetypal Alliance Party candidate. She has also shown herself more sensitive to the issues affecting working-class people than most of her party. At Westminster, she voted against the Welfare Reform Bill, which Alliance wants enacted in the North.

Long is not having the same good fortune now as in 2010. The scandal round the Robinsons has dissipated. Next month, she is facing Gavin Robinson (no relation of the First Minister), without  ‘Swish Family Robinson’ baggage and a standard bearer for modernisation of the DUP.

The wide-ranging alliance that backed her has sundered. Three years ago Alliance members on Belfast City Council voted to fly the Union Jack over Belfast City Hall on designated days, rather than every day as previously. That stirred up a wave of working-class Loyalist protest – including from some who had backed Long.

However, many of these working-class Loyalists are so alienated from the political process they are unlikely to vote. The DUP is playing the social-conservative card to attract the more middle-class end of her vote. Many of these are older and religiously conservative middle-class Presbyterians. Flying the Union Jack over Belfast City Hall is not a make-or-break issue for them. They are concerned, however, at her support for gay rights and same-sex marriage.

The numbers spell out Long’s difficulty. She had a majority of 1,500 over Peter Robinson last time: the Ulster Unionists stood and gained just over 7,300 votes. This time, they are backing the DUP. While some Ulster Unionist voters will find the DUP too hard to stomach, more will vote Gavin Robinson than Long.

South Belfast is also in real contention. SDLP leader Alasdair McDonnell has won twice due to a split – even shredded – Unionist vote. The constituency was then majority Protestant, though it is now fairly evenly balanced.

South Belfast is different from most of the rest of the North: it has a large population born outside the North, and sizeable enclaves of middle-class trendiness. McDonnell has not made his task easier by imploding publicly in recent months. His most spectacular gaffe was to say: “Nobody can predict that a foetus is not viable and that’s the problem, and as a GP, I’m fully aware” while speaking about abortion. At time of writing, his most recent blunder was to refuse to say whether David Cameron or Ed Miliband would make the best UK Prime Minister – despite the SDLP being British Labour’s sister party. McDonnell is also victim of very nasty online campaigning.

Figures indicate McDonnell will have some difficulty. According to local election tallies, five parties are separated by 2,000 votes. The DUP is ahead, then Alliance, followed by the SDLP, Sinn Féin and Ulster Unionists. Sinn Féin is running former Belfast Lord Mayor and businessman Máirtín Ó Muilleoir, who can encroach on the SDLP vote.

However, McDonnell is slight favourite. The agreement between the DUP and Ulster Unionists does not embrace this constituency, meaning both are standing. UKIP is also running, with its candidate having a certain base in some of the working-class Loyalist parts. For all this, it would be foolish to rule out the DUP’s Jonathan Bell, coming through a crowded field. Bell is, however, at a certain disadvantage in this middle-class constituency. He once criticised golf clubs for harbouring sectarian attitudes. 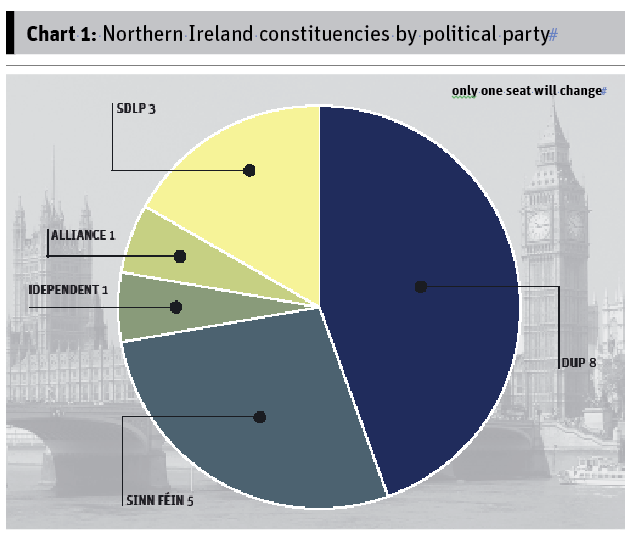 The other constituency which may change hands is Fermanagh and South Tyrone. This is not the same constituency as that which elected hunger striker Bobby Sands in 1981. In the 1995 shake-up of Northern seats, large, mostly nationalist components were hived off to West Tyrone and Mid Ulster.

The election in Fermanagh and South Tyrone will take place in a parallel universe. It will be a naked sectarian headcount. This is despite the Fermanagh end of the constituency having seen a major campaign against fracking, and an anti-fracking activist standing as a Green candidate.

In the sectarian fracas, Sinn Féin’s Michelle Gildernew is favourite against the Ulster Unionist Tom Elliott, who is also supported by the DUP. There is an estimated nationalist majority of almost 4,000 on the register. Elliott also suffers from DUP mealy-mouthedness. In November last year DUP Enterprise, Trade and Investment minister Arlene Foster told the DUP Conference he couldn’t win the seat, though she supports him. The SDLP is running a councillor from west Fermanagh, but his vote will be squeezed: possibly further damaging the SDLP’s viability in the constituency.

There is little evidence on the surface that the election takes place less than two months after a strike that comprehended most of the North’s public sector, though not its local councils. It was political, in being directed against the budgetary measures of the Stormont House Agreement. The trade unions made it clear they were striking against the Executive.

Beneath the surface though, there is evidence of a shifting in the political process. Sinn Féin withdrew support from proposed welfare cuts because it found its supporters wouldn’t accept them.

A certain indication of the strike’s effect will be the vote for People Before Profit candidate Gerry Carroll in West Belfast: Carroll was elected to the City Council last year with the second-highest vote in his area.

Broadly, whereas in the Republic, the water charges issue had a visible political impact, the equivalent campaign – on public sector cuts – will not determine much in the North.

Little change as ever, with a probable DUP gain from the Alliance Party. •