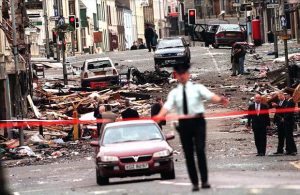 On 8 October last Judge Mark Horner in the High Court in Belfast gave the reasoned judgment behind his decision of 21 July that there should be a new Human Rights compliant investigation into the catastrophic bombing of Omagh on 15 August 1998. He suggested that preferably there should also be one conducted simultaneously in the Republic of Ireland. The judgment was on foot of a Judicial Review brought by Michael Gallagher in 2013. Gallagher was appealing the decision of the then Secretary of State for Northern Ireland Theresa Villiers not to set up a public inquiry into the bombing of Omagh by dissident republicans (referred to as DRs by Judge Horner).  Michael Gallagher’s son Aiden was one of the 29 people who died.

Judge Horner found that there were reasonable grounds for believing that the Omagh bomb could have been prevented. The case, conducted largely in closed session, heard closed (secret) intelligence from MI5 and other agencies as well as evidence in open court. The Judicial Review was of course a civil case but one which engaged issues of (UK)  National Security because of the intelligence material from M15 and other agencies which was revealed to the court. Mr Justice Horner put heavy emphasis on the intelligence given to his RUC CID handlers in 1998 of a British  agent/informant  ‘Kevin Fulton’ who had also been the central witness at the Smithwick Tribunal in Dublin, giving evidence in 2011. Fulton was a former FRU, Special Branch, MI5 and latterly RUC CID agent and informer ‘embedded’ with the IRA in Dundalk and Newry in the 1980s and 1990s.

In an endorsement of Fulton’s highly contested intelligence leading up to the bombing the Judge said:

“I am satisfied that it is arguable that the intelligence supplied by Kevin Fulton, either on its own or more importantly in conjunction with other intelligence about the activities of those who planned the Omagh bomb and other bombs had a real prospect of preventing this tragedy”.

Neither Fulton nor his handlers claimed to have foreknowledge of the Omagh bomb itself but said he had warned handlers that a huge bomb was being prepared that was about to be moved north of the border days before the bomb.

The former Police Ombudsman Nuala O’Loan in her 2001 report and now Judge Horner believe that the intelligence Fulton gave his RUC handlers in the months, days and weeks running up to the bombing was crucial information that should have been acted on to prevent the bombing. Fulton and his handler gave evidence about this intelligence concerning dissident republicans to O’Loan and Smithwick.  The October /November print  issue of Village magazine contains an extensive analysis of the evidence of Fulton and his handler  leading up to the Omagh bombing and its aftermath, and explains the significance of this intelligence in detail.

Reliable sources maintain that Keeley was not in fact a detached observer of events leading up to Omagh, as he maintains, but was deeply involved himself. 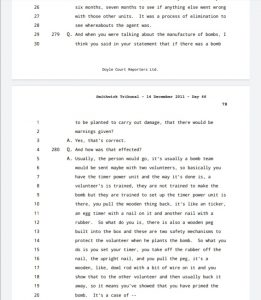 In his evidence to Smithwick in December 2011 Fulton describes the operation of the timer unit of a bomb. In Queen v Hoey (2006) Mr Justice Weir describes how such a safety mechanism was added to timer units in the run up to the Omagh Bomb.

Ground 2: Information passed to police between June and August 1998 by a former British security agent known by the name of Kevin Fulton relating to DR* activity. Ground 6: Surveillance operations relating to events surrounding the Omagh bomb that were reported on in a BBC Panorama; in particular telephone and vehicle monitoring carried out by GCHQ. Ground 7/9: the tracking and pattern of telephone usage by DRs and the connection arising between different bomb attacks, including the same mobile telephone being used in the Omagh bomb and the bomb in Banbridge on 1 August 1998. Detective Chief Superintendent Norman Baxters evidence to the NIAC, [Northern Ireland Affairs Committee HOC] to the effect that investigators into previous attacks in 1998 did not have access to intelligence which may have enabled them to disrupt the DR gang by way of arrest or house searches prior to the Omagh bomb.

There were a number of arguments put forward by the applicants which the Judge did not accept as grounds for a new inquiry:

Ground 3: Information provided by David Rupert  Ground 4: Information sent to the RUC by AGS on 13  August 1998 relating to the particulars of the red Vauxhall Cavalier that was used in the Omagh bomb. Ground 5: Information shared by AGS with the RUC relating to intelligence obtained by Detective Sergeant John White from the agent known by the name of “Paddy Dixon” [in] relation to DR activity.

“I am satisfied that grounds 2, 6, 7 and 9 when considered together give rise to plausible arguments that there was a real prospect of preventing the Omagh bombing.

Judge Horner’s judgment is a vindication for Kevin Fulton over Omagh but like all informants and agents operating in the stygian underworld there is a dark side to Fulton which Village Magazine has also explored at length. (Like many British agents Fulton has a dark side: see Investigation: Killusion and How Drew Harris diverted the Smithwick Tribunal.

The High Court  judgment was in the context of Mr Gallagher’s civil proceedings. Many victims or their families are taking civil actions against the State, not just to achieve some form of redress, but to gain an understanding of events through the discovery process.   Since 2013 such proceedings are often  conducted partly or wholly as ‘Closed Material Proceedings’  ( CMPs) for reasons of ‘National Security’ and to comply with human rights legislation to protect the life of intelligence sources agents and informants. As was the case in the Gallagher case under discussion here, cases involving sensitive matters relating to security of the State are not just conducted in ‘open’ and ‘closed’ sittings but the judgments are both ‘open’ and ‘closed’. The closed judgment cannot be revealed and the open judgements treat any references to closed material carefully.

Horner’s judgment was situated firmly in the context of the European Convention of Human Rights Article 2. This guarantees not just  the protection of life it also   imposes on the State an obligation to investigate suspicious deaths. The British Government’s new proposals for dealing with ‘legacy’ cases would mean an end to such investigations.   The recent success is a huge victory for Michael Gallagher and his campaign to vindicate the rights of the Omagh families. Will it be possible for the British and indeed the Irish Government to resist the moral force of Judge  Horner’s judgment? 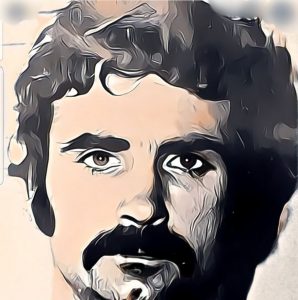 Licence to Lie. Freddie Scappaticci, a British agent inside the IRA, sought immunity from prosecution from British legal authorities so he could claim he was not Agent Stakeknife at a secret meeting with a tribunal in Dublin.

A murky affair: the Garda made no progress into the IRA murder of Tom Oliver until an intervention by Drew Harris, then with the PSNI, now Garda Commissioner.

New DUP leader Jeffrey Donaldson alleged that a Garda mole was involved in the IRA murder of two RUC officers.