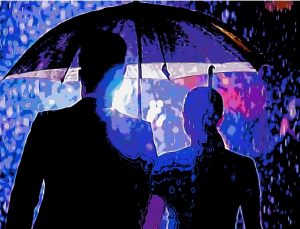 Queen Elizabeth II received briefings from fifteen chiefs of the British Secret Service during her 70-year reign, much of it about Ireland. The briefings undoubtedly covered a wide spectrum from Charles Haughey, the bogeyman of Irish politics – as the UK saw it – to Martin McGuinness and the murder of Lord Louis Mountbatten. In the modern era the communications of Prince Harry and his American wife are surely being monitored by Britain’s vast espionage network, in particular, GCHQ. 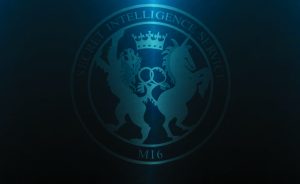 Richard Moore, the Chief of the British Secret Service (MI6/SIS), has offered his “deepest sympathy and condolences to the Royal Family”, adding that:

Fifteen Chiefs of SIS held office during her long reign. Each of us were honoured to oversee the provision of intelligence to the longest running reader of intelligence reports. In my meetings with The Queen, I was always struck by her candour, wit and burning sense of duty.

MI6 is Britain’s overseas intelligence service. It is part of the Foreign Office. (MI5 operates inside the UK and Britain’s colonies.)

The fact that Queen Elizabeth II enjoyed meetings with no less than fifteen MI6 chiefs and that reports were submitted to her, may come as a surprise to some. However, readers of ‘The Secret Royals’ by Rory Cormac and Richard Aldrich will not be surprised. ‘Secret Royals’ came out in hardback last year and is about to be published in softcover shortly. The book is a genuine page-turner packed with one fascinating story after another, the cumulative effect of which is to afford a fascinating insight into the relationship between the British intelligence community and Buckingham Palace. It is no exaggeration to say that the TV series ‘The Crown’ is drab by comparison to it. (The book is known as ‘Spying and the Crown’ in some jurisdictions.)

In full, the statement issued by MI6 Chief Moore (also known as ‘C’) reads as follows:

2. Charles Haughey was perceived as an enemy of the Crown.

Many secrets, however, remain buried in the vaults. It would be fascinating to know what type of material MI6 showed to Queen Elizabeth about this country. Did they, for example, reveal what they knew about Charles Haughey, the perceived bogeyman of Irish politics? MI6, like the British establishment, never understood Haughey and tagged him as a clandestine IRA godfather, at least during the 1970s.

In 1980, Robin Haydon, Britain’s ambassador to Dublin, described Haughey to Lord Peter Carrington at the Foreign Office as ‘no friend of ours’ and as a man who had the potential to become ‘hostile’ towards the UK. Haydon was known as ‘Sir Spy’ among Haughey’s inner circle. No doubt MI6 was just as critical of Haughey in its briefings at Buckingham Palace.

3. Reports about the Provisional IRA.

The information furnished to Buckingham Palace in 1979 must have made for sombre reading. Did Martin McGuinness’ name crop up in the briefing about the murder of Lord Louis Mountbatten? If MI6 was any good, it should have. In later years, both parties shook hands with each other as part of the peace process.

And what of the reports on Haughey after he became Taoiseach (Irish prime minister) in December 1979? An intriguing thought is that these reports may still exist in some shape or form at Buckingham Palace and may one day fall into the hands of historians such as Aldrich and Cormac.

4. MI6 and damage to Anglo-Irish affairs.

How much damage did MI6 chiefs such as Sir John Rennie, 1968-73; Sir Maurice Oldfield, 1973-78; and Sir Arthur Franks, 1978-82,  occasion to Anglo-Irish affairs by briefing Queen Elizabeth with faulty information about Haughey, Fianna Fail and the attitude of people in Ireland towards the IRA?

A file released by Britain’s National Archive in London in 2009 revealed Queen Elizabeth’s  “alleged dislike of the Irish”. The comment was made by a Foreign Office official in 1979. This (and other factors) shut down the possibility of a state visit to London by Irish President Patrick Hillery. A more extensive analysis of the queen’s hostility towards Ireland was not released.

The effect of a state visit by the late President Hillery and a reciprocal one by Queen Elizabeth in 1979/80 is now difficult, if not impossible, to guage save to say that it could only have improved relations. Haughey’s first term as taoiseach spanned December 1979 to June 1981.

In 1979, during a trip to Chicago, Princess Margaret commented at a reception hosted by the city’s mayor, Jane Byrne, that: “The Irish, they’re pigs.” (A claim was later made that she had uttered the word ‘jigs’ not ‘pigs’.)

5. A regular visitor to Ireland.

Henceforth, Richard Moore will report to King Charles III. The new monarch, a popular figure in Ireland, will be eager to learn all he can about the Irish dignitaries he has met, and those he has yet to meet.

Those who have met King Charles on his many visits to Ireland, such as President Michael D. Higgins, have praised him for the depth of his knowledge about the island. The President has even opined that he knows more about this country than ‘some’ British politicians. In private, senior Irish diplomats are voicing alarm not merely about the profound ignorance of senior Tory politicians, but also their advisers at the FCDO.

MI5 and GCHQ will also report to the new king. GCHQ monitors global communications including those of Ireland.

King Charles has already established an excellent relationship with the intelligence community. As prince, he was patron of GCHQ, MI6 and MI5. On one visit to GCHQ he told his hosts that:

Few people in this country will ever know just how great a debt we all owe you.

But for those privileged enough to understand something of what you do, the difference you make to our security, our prosperity and to the defence of our values is both clear and invaluable.

During a visit to GCHQ’s museum at Cheltenham, King Charles was once shown the codebook which had been created to provide a secure communications path to protect him while he was in the Royal Navy serving at sea.

In the 1980s, MI5 deployed units such as the ‘Dolly Mixtures’ to monitor the social shenanigans of political VIPs and members of the aristocracy. MI5 and the special branch routinely vetted proposed guest lists of people  invited by members of the Royal Family to theatrical events and the like. The purpose of these operations was, where possible, to prevent scandals before they erupted.

One scandal the security and intelligence services failed miserably to thwart was that involving Prince Andrew and Jeffrey Epstein.

Megan Markle has been the cause of considerable trouble for the Royals. It would be astonishing if they did not keep an eye on her as once they did when Lady Diana Spencer and Wallis Simpson were the cause of concern.

Will the Royals and their courtiers monitor her dealings with the media as she presses ahead with her campaign to brand them as racist?

The duchess attempted to accompany Prince Harry to Balmoral so that she could be at the Queen’s side before she passed away. When this became apparent, it was made plain to her that she would not be welcome. Surely Buckingham Palace will want to learn how she is reacting to that snub, especially in light of the subsequent olive branch King Charles extended to her during his recent address to the nation.

She and Prince Harry are grasping the olive branch – for now. They went on a ‘walk about’ at Windsor Castle on 10 September with Prince William and his wife in an apparent show of reconciliation.  What, however, will now happen to the incendiary autobiography Prince Harry has written. It is expected to be deeply critical of the new king. Will GCHQ share the ongoing communications between the prince and his publishers with his distraught father? Is there even the slimmest chance of halting its publication?

The autobiography is set for release next November. It will be printed at Clays in Bungay, Suffolk, under conditions of great secrecy. Security guards will check the printing staff as they leave the factory premises to ensure they don’t smuggle out copies. Independently, the publishers will send extracts to the media companies who have purchased serialisation rights. It is laughable, however, to think the British Establishment will not acquire a copy – if they don’t already have a version.

The Establishment has a long tradition of acquiring manuscripts of interest to it. In 1971, a Foreign Office official called A. C. Thorpe was assigned the task of obtaining the galley proofs of a book about Charles Haughey and the Arms Crisis. It was written by an Irish military intelligence officer called Captain James Kelly. MI6 and the Foreign Office wanted to suppress the book. They failed. The book was called ‘Orders for the Captain’ and became a bestseller in Ireland. If Prince Harry’s memoirs appear on Guy Fawkes Day (5 November), the Palace can expect plenty of fireworks.

The future relationship between Buckingham Palace and His Majesty’s spies looks positive. In 2019 Prince William spent three weeks on work placements with MI5, MI6 and GCHQ.

David Burke is the author of  Kitson’s Irish War, Mastermind of the Dirty War in Ireland. It examines the role of counter-insurgency dirty tricks in Northern Ireland in the early 1970s and the template it set for the Troubles. His next book, An Enemy of the Crown, the British Secret Service Campaign against Charles Haughey, will be released at the end of September 2022. Both books can be ordered/purchased here: 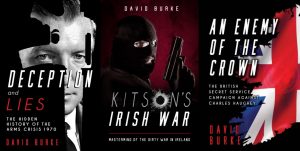