In the early 1980s the government decided to try to get children to drink more milk. I’m not sure that there had been a problem with children not drinking milk. As I recall, that’s all we drank. Yet it introduced a free milk scheme. The milk was to be distributed through schools and it was packaged in a sort of rough plastic bag. If it had arrived cool, by the time we were given the milk it was warm and smelled rancid. We used to have fights using the gone-off milk on the way home from school. If the policy was intended to get children to drink more milk, and not designed to alleviate the then-growing butter mountain, the policy failed.

The government is still concerned about children’s diets. Since the 1980s there has been an increase in the number of children who are overweight and diagnosed with type II diabetes – the one related to poor diet. When confronted with such figures the first response should be to question the data. As we can see with Garda data on crime, even measurement of clearcut things is rarely simple. Data are based on man-made decisions, collected by humans, and so can be subject to human biases. The measure of weight using Body Mass Index (BMI) is somewhat controversial, though some of the criticism is overdone. We know for instance that muscle weighs more than fat, and so very fit people can be classed as overweight. We also know that all fat isn’t equal. Fat around the bum and thighs may not be wanted, but it’s not deadly in the way visceral fat around the organs at the belly is. Weight itself isn’t a problem, it’s what weight is associated with.

But as a measure BMI broadly correlates with other measures of health, and has the advantage of being relatively easy to measure. We also do it right. Though expensive, we now measure a genuine random sample of people in Ireland, with interviewers willing to call to targeted respondents multiple times. This is rare. It’s also rare to survey over 7,000 people, which allows us to see where they live and who they are in greater detail than most other surveys would. So let’s assume that the data are broadly right, and about 60 per cent of adults are overweight or obese.

The government’s concern has led to a number of policies being introduced. One is to give out free samples of healthy food in primary schools – in a Food Dudes programme. It’s the modern equivalent of the milk-in-schools scheme, and it makes the same mistakes. The fresh vegetables and fruit are not that fresh, and so children who don’t normally eat fresh fruit and vegetables will be left (even) less likely to try them again.

In the recent budget Paschal Donohoe announced another policy, which has been dubbed a sugar tax. It isn’t actually a sugar tax: processed sugar is zero-rated for VAT and will continue to be. It’s a tax on sugar-sweetened beverages. Sugar is seen by some as today’s tobacco. Whether it is or not is less clear. There’s no evidence that sugar has properties that are addictive in the way nicotine is, but it’s also clear that there is a link between sugar-sweetened processed foods and diseases such as diabetes. However, if we look to UK data (which we are culturally and economically closest to) we are consuming fewer calories now than in the 1980s. However, the nutritional value of the calories we are consuming may have changed. Milk consumption among US children and adolescents has halved since the 1960s, largely replaced by sugar-sweetened beverages. So even though we don’t have good time-series data for Ireland, and the Healthy Ireland survey doesn’t give us very fine grained data on what we are eating, we’re probably consuming more sugar now than in the past. 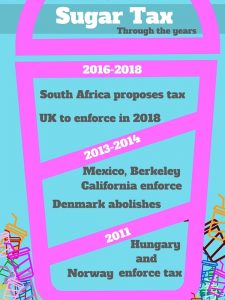 So how do we deal with this? And will Paschal Donohoe’s intervention work? Taxes affect behaviour. We often don’t want them to affect behaviour – taxes on work tend to deter people from offering or taking up employment; taxes on goods may stop people from trading goods, suppressing economic activity. But what if those goods are ones we don’t really want people to consume, or certainly not in large volumes?

As long ago as 1776 Adam Smith, who didn’t want taxes that distort the economy, nevertheless noted that “Sugar, rum, and tobacco are commodities which are nowhere necessaries of life, which are become objects of almost universal consumption, and which are therefore extremely proper subjects of taxation”.

Whether these taxes would work depends on their price elasticities. That is, the extent to which price changes cause changes in demand. Demand for tobacco is shown to be highly inelastic to changes in prices. Increased prices have little impact on consumption. The tax on cigarettes is now about 400% and, while smoking has reduced that is mainly because of lower take-up and people quitting for health reasons, though no doubt the price helps. It can raise a lot of revenue for the state. But even this huge tax might not affect consumption among existing smokers.

Will it deter people? Research by Mathew Harding and Michael Lovenheim, published in the Journal of Health Economics, on elasticity of demand suggests that sweet snacks are quite inelastic, which might mean taxes won’t affect behaviour much. However, using modelling techniques, which are themselves problematic, they found it might work: a 20% tax on high-sugar products might reduce sugar consumption by 16%.

There have been numerous attempts at taxes of sugar-sweetened drinks in the US and Mexico. The evidence isn’t strong, but most studies show some decline in consumption. But the decline is usually small – likened to a few sips a day – so possibly not worth the effort. And the tax would need to be significantly bigger to elicit even modest behavioural changes. Perhaps this is Donohoe’s vision.

Taxes such as the plastic-bag levy work because we are charged for a product we don’t need and adjust our behaviour. While you might argue we don’t need SSBs, the consumer wants to consume the drink. No one ever went to the shop to buy a plastic bag. The same holds for coffee cups. They’re merely the receptacles for the product we want to consume. That’s why the levy on single-use coffee cups, if it’s high enough and not absorbed by the coffee shops, could work. 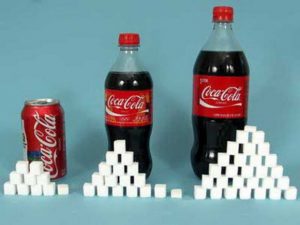 Even if people switch from sugar-sweetened beverages it matters that they move to something better. People may consume more sugary cakes, sweets and chocolate. Merely substituting for these might marginally increase the nutritional value of our diets, but could introduce other problem foods such as processed fats without decrease the sugar intake. However, we may see a substitution of artificially sweetened drinks. These may not be the cancer risk that people once thought, but nor are they a solution. A recent meta-analysis of the scientific literature concluded “artificially sweetened beverages and fruit juices were unlikely to be healthy alternatives to sugar sweetened beverages for the prevention of type 2 diabetes”.

The problem could be that we are consuming a lot of sugar, and possibly worse chemicals, in otherwise nutritionally valuable foods – part of the Halo effect that featured in the July edition of this magazine. Much processed food has added sugar, but this tax will do nothing to deter people from consuming these. Why these aren’t affected might be for practical reasons – it’s hard to police, or because of an unwillingness to take on a large and quite powerful domestic food-processing industry. So we appear to be left with an ineffective policy.

Ineffective policy initiatives aren’t always useless. Ireland recently banned smoking in cars with children. The Garda effectively said the law was unenforceable. There will be no convictions for this. But it might have played a useful exercise in legislative signalling: telling parents that society doesn’t regard smoking around children as acceptable. It might reinforce other messages that people get on this.

So the apparently useless policy can also prove effective if it signals to others the state’s direction of travel. An ineffective tax on SSBs might signal to food companies that the state is serious about this issue and rather than wait for new regulations or taxes the industry may start to make those changes voluntarily. We’ll see.

But the big problem with this policy initiative is that obesity derives less from the consumption of energy, than from the failure to expend it. If we are consuming fewer calories that before – as the UK data suggests – the problem is that we simply aren’t burning them. Children are much less likely to walk or cycle to school than in the past. They are less likely to play outside and they spend more time on electronic devices. The design of our physical environment favours car transport, though this is slowly changing. A recent DCU study shows that Irish children as old as 12 are unable to run, jump, throw, catch or even hit any type of sports ball properly due to inactivity.