The recent discovery of the chemical Teflubenzuron at hundreds of times the legal limit in the environment of a Marine Harvest salmon farm in Scotland highlights the dangers of releasing chemicals uncontrolled into our waters. The old attitude of ‘dilute and disperse’ has in fact despoiled our environment, both in the air and in the seas.

Teflubenzuron is one of the chemicals used to control sea lice. These can harm and even kill farmed salmon. Resistance to chemicals builds and sea lice are regularly recorded at levels where existing protocols require mandatory treatment.

In the wild, salmon return to fresh water to spawn and the lice fall off. Captive in our bays, in fish-farm-factories, conditions favour the congregations of sea lice. If there are a million fish on the farm with just one egg-bearing louse each, the farm may release 500m lice larvae. Even infestations at levels below which they affect the caged fish can infect wild salmon at distances of up to 30 kilometres.

In the UK, horses can only be treated with cypermethrin if a veterinary certificate is supplied saying that the horse will not be killed for human consumption

Here in Ireland, Marine Harvest, the Norwegian-owned company that produces 80% of Irish farmed salmon, has stated that it “never used this medicine [Teflubenzuron] in our organic fish anywhere in Ireland, including Bantry Bay”. Though we must give it the  benefit of the doubt, this cannot be independently verified – as information about the type, frequency of treatment, and volumes of chemicals used in any Irish salmon farm is not publicly available. The Regulatory Agency does not ‘hold’ this information and the companies  refuse it on grounds of commercial confidentiality: “every stage of our production process is audited annually by independent bodies”.

We do, however, have Marine Harvest’s EIS (Environmental Impact Statement) for the 42.5ha Bantry Bay proposed €3.5m expansion. In volume 2 of 3 it lists Teflubenzuron on the ‘Marine Harvest Medicines Positive List‘ to treat sea lice. 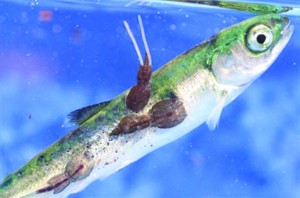 Although the Marine Harvest statement makes the point that Teflubenzuron  is not used on ‘organic’ farms, it does approve other chemicals for use on organic farms on what it calls the ‘Medicine Positive List’ in the EIS. These include Excis (cypermethrin) and AlphaMax (deltamethrin). Referred to in the EIS as ‘medicines’ or ‘chemotheruputants’, these chemicals are in fact ‘biocides’.

Medicines are a ‘drug or other preparation for the treatment or prevention of disease’.   Theraputants aim at the ‘remedial treatment of disease’. Biocide is a word that stems from bio (for ‘life’) and cides (for ‘killing)’.

The chemicals on Marine Harvest’s ‘Medicine Positive’ list come under the EU’s Biocides Directive as product type 18 – insecticides – but they do not appear on the Registry of Irish Biocides, as maintained by the Department of Agriculture. If the product was classed as a biocide rather than a medicine in Ireland, its use would not legally be permitted unless it could be ‘scientifically demonstrated that under relevant field conditions there is no unacceptable effect’.

These chemicals kill life; medicine saves lives. These chemicals are extremely ecotoxic active neurotoxins. Arthropods, and particularly crustaceans, are highly susceptible. There are known effects on fish and, most sensitive of all, shellfish such as lobsters. Bathers may also be at risk. For this reason, the manufacturers of both products clearly indicate that there should be no release to the environment and the Irish Medicines Board Information sheets for these chemicals state: “Do not contaminate natural water with the product”

According to the Galway Bay EIS prepared by the applicant for its 455-ha site, the Government agency, Bord Iascaigh Mhara, ‘The volume of chemical used to treat a single pen of salmon [36 pens are proposed] is estimated at 3,333 cubic metres’.  For comparison, an Olympic swimming pool holds 2,500 cubic metres. This will be discharged directly into the (once) natural waters of our Bays in spite of the fact that the manufacturers do not support direct release of these neurotoxins.

And all this gets organic certification.