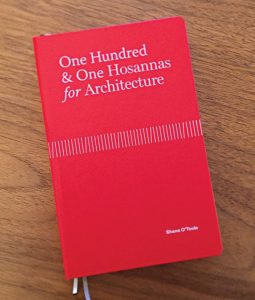 Designed much like a guidebook, to fit into the pocket of a good tweed jacket, and with not one but three ribbons to hold one’s place, ‘One Hundred & One Hosannas for Architecture’ is in fact a collection of essays by Shane O’Toole, Ireland’s most celebrated critic of the island’s contemporary architecture. The book makes a good travelling companion. The brief pieces hold your attention well, but do not individually demand it for very long. Unusually for a book about architecture, it is not illustrated. Perhaps the author and his designers simply assumed that we all carry smart phones, on which we can call up the colour photographs that are too expensive to print. It is also possible that they simply did not want even the buildings that are his subject to distract from O’Toole’s eloquent prose. The volume’s design is handsome without being distracting, although I dread the many late night e-mails from my students on how to cite a book that lacks page numbers.

The journey here proves temporal rather than geographic. Almost all the essays have Irish architecture or the celebration of it at their core. Most were written for publication in The Sunday Times. These are particularly effective at communicating to readers with little background; those published in Architecture Ireland, especially the accounts of prize ceremonies in Barcelona, where the focus shifts from buildings to name-dropping, are less successful. At O’Toole’s best, – and he is almost always at his best – he reminds us how the Irish architects who are now among the most renowned in Europe achieved their current position and what other younger Irish architects are following in their wake.

The earliest essays date to 1999; only in the middle of the following year did O’Toole begin to address contemporary Irish architecture. The boom and bust associated with the Celtic Tiger does not figure prominently here. Instead one subject traced is the steady rise in first local and then international significance of the architects with whom O’Toole collaborated as Group 91 on the revitalisation of Temple Bar. Since then, while O’Toole has mostly focused on criticism, his former collaborators: Grafton, O’Donnell & Tuomey and McCullough Mulvin in particular, along with the slightly younger partnership heneghan peng, have achieved a degree of international renown that has little Irish precedent. The story of their rise unfolds in O’Toole’s pithy pieces as it happened and with little mention of such accompanying frustrations as the relatively small slice of the pie they were accorded at home, when much new construction before the crash was decidedly subpar and very little was built for many years afterwards. There is no mention of ghost estates or Priory Hall here!

O’Toole instead focuses on success. At the same time, his take on what will endure is particularly convincing because it is so firmly rooted in an understanding of both the recent and the not so recent past. His appreciations of the pioneering Irish modernism of Michael Scott and of his subsequent partners Ronnie Tallon and Robin Walker, as well as of the much more controversial Sam Stephenson, are some of the finest pieces of recent writing on Irish architecture. He is also excellent on de Blacam and Meagher, who probably did even more to prepare the way for the current Irish stars. These often affectionate accounts will entice even those Irish readers not already committed to the cause of outstanding architecture. At the same time they are sure to engage those from abroad drawn to the subject by the high calibre of our very best new buildings.

O’Toole has a good story to tell, but a larger issue for the concerned local public is how the success he chronicles can be embedded in Irish society as a whole. There is very little in these pages about housing or for that matter about office blocks, two of the building types that do the most to shape the daily experience of Irish cities and even towns, but whose quality is more often than not far less distinguished than it would be if developers were as willing as local authorities were during the opening years of the new century to work with the most talented firms. Hobnobbing with Pritzker Prize winners in Barcelona is no substitute for more affordable apartments of the calibre of the Timberyard.