The paperback version of ‘Handbook of the Irish Revival’ was recently launched at Notre Dame’s O’Connell House, to coincide with their St Patrick’s day festivities and, of course, the commemoration of the 1916 Rising.

The volume, an anthology of Irish Cultural and Political Writings 1891-1922, is beautifully produced by Abbey Theatre Press with the look and feel of a hardback though it is very reasonably priced at just €15. As the Abbey director-turned publisher, Fiach Mac Conghail, reveals in his introduction, the book arose from the ‘Theatre of Memory’ Symposium in 2014. During the concluding session Declan Kiberd lamented the fact that so few of the original writings of the Irish Revival were readily accessible. It’s to Mac Conghail’s enduring credit that he rose to the challenge by facilitating Kiberd and his co-editor PJ Mathews.

Kiberd, though not a professional historian, has emerged as one of the most authoritative voices on the 1916 Rising, providing us with the clearest insights into the complex and sometimes confused intellectual world of the revolutionaries. He has always contended that for Romantics like Pearse and MacDonagh, both keenly interested in English literature, the Rising was a piece of theatre that could only end in their own deaths. Pearse who was described by one of his admirers as a “bit of a pose” may have been comfortable with the bizarre pageantry of the GPO, but he lacked the skills of a military commander. A prolific writer in both English and Irish, he features regularly in the anthology.

It’s a digest of essays and articles, pamphlets, songs and poetry – most of them no more than two pages long – from the great names such as Yeats, Synge, Joyce and some of the lesser known but also influential. Each of the chapters is accompanied by an introduction in much larger font. Indeed, the overall design of the book makes it very appealing. No sooner have you read one chapter than you immediately want more. It’s a book for the serious academic or the ordinary punter who wishes to dip into writings of the period to get a avour of the zeitgeist.

As you read it you get the sense, as the introduction states, that these were men and women who “lived intensely in the present moment; took ideas more seriously than their own careers; and contributed brilliantly to debate”. That selflessness, brilliance and intensity is perhaps best reflected in the writings of Connolly, whose prose can hardly contain his obvious passion.

Take for an example this sentence from his 1897 essay ‘Erin’s Hope’: “Recognise the right of all to an equal opportunity to develop to their fullest capacity all the powers and capabilities inherent in them by guaranteeing to all our countrymen and women, the weak as well as the strong, the simple as well as the cunning, the honest equally with the unscrupulous, the fullest, and most abundant human life intelligently-organised society can confer upon any of its members”. What it lacks in Orwellian precision it makes up for it in its obvious fervour. 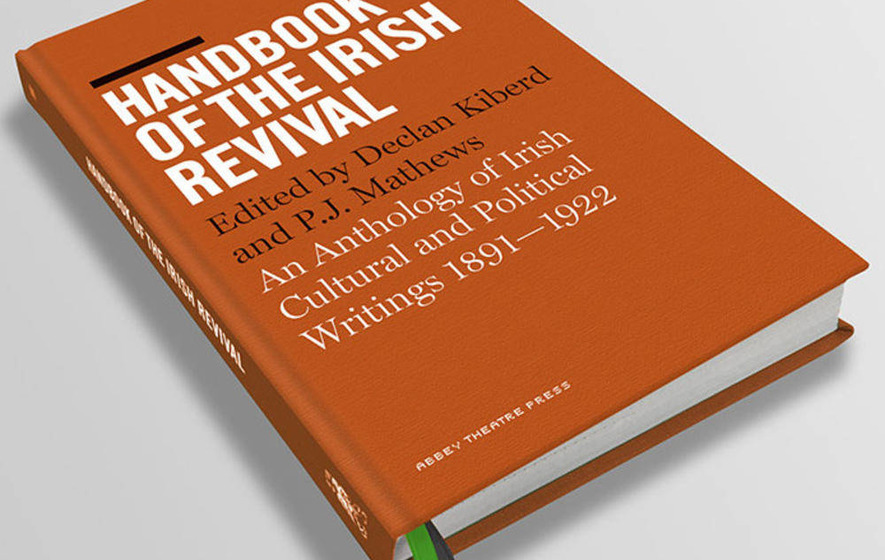 This passage is taken from the chapter entitled ‘Militarism and Modernism’ whose introduction identifies the reason for the cultural and political malaise that would soon envelop the new state. “Militarism began to trump modernism”, the authors observe- the men of the the Rising, war of independence and the civil war were better suited to military affairs then forging a modern democratic state: “Mass suffrage came to many areas but soon declined into mere electoralism, as political leaders whose consciousness had been formed more through soldiering than through cultural action, offered ever more dogmatic, ever less thoughtful analyses”.

It is easy to ‘idealise the idealists’ at this remove, but it would be foolish to forget that our new State was governed for its first fifty years by the men – the women were written out – of 1916. Socially and economically our new state was illiberal and stagnant, a failed state dominated by the Catholic church. So while this book shows that those who inspired the Rising may have been enlightened, it could also be argued that they were in many ways obstructions to progress. The new State was patriarchal, consigning women to the home and discriminating against them in the workplace. It must have been a disappointment to the women who had campaigned for universal suffrage such as Eva Gore Booth. In her poem ‘Women’s Rights’ from 1906 she portrays male dominance as contravening the natural order:

Men have got their towers and walls, We have cliffs and waterfalls.

Oh, whatever men may do, Ours is the gold air and the blue.

Men have got their pomp and pride – All the green world is on our side’.

The new State’s attitude to the Rising has been at times ambivalent. We have moved swiftly from commemoration to revisionism back to celebration. We have also moved from isolated nationalism to become the most globalised country in the world, without pausing for breath or even adequate reflection. The transformation has been staggering. Ireland, the country that its citizens wanted to leave, and whose citizens emigrated in droves, is now a favoured destination for migrants. From the end of the Second World War up the start of the 1960s we were the only state in Europe that experienced population decline. Now one in eight people is a non-national in a population that has grown steadily.

This new Ireland is closer to Boston than Berlin and has, as perhaps might be expected, even turned its back on some British virtues.

The British tried with some success to introduce a system of planning for urban and rural areas. One only has to contrast the British countryside with its beautifully planned towns and villages with the free-for-all in Ireland, to know that independence embraces the freedom to make a mess of things. And though there are many who wouldn’t change a thing, this strain of individualism is unhealthy in a State that is not just unplanned but saw t to enter the new millennium with neither property tax nor water rates, and many of whose most radical still unfortunately fight them.

If the publishers are considering future editions, they might address some shortcomings: there’s no index, something that can be fixed with decent publishing software; the authors also seem to have strayed from their original remit by including writings from the 1940s and 1950s when the new State was already up and faltering; finally, there are no contributions here ‘as Gaeilge’: an oversight, given that the revival of the language was a major motivating factor for many of the revolutionaries. But these are quibbles. Overall, this is a must-read, stimulating compendium for anyone with an interest in this period of our history and culture.