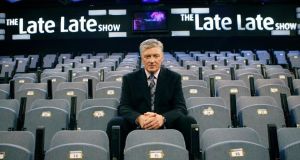 Why he is in the news: celebrating tenth year presenting Late Late Show; foregoing ten per cent of his salary;  buying his sponsored BMW car.

Where you find him? Prime time on RTE; in his (now extended) garden in Dalkey

What he does? Serious though never passionate radio; wooden TV

What gets him going: salary, property, politics

Most likely to say: Our prize this evening is an Opel Vectra with

Most surprising thing about him: if you think about it, he has no sense of humour

Salary: Kenny was the highest-paid presenter on RTÉ in 2004.   His earnings of €899,000 a year were almost twice the earnings of his nearest rival Gerry Ryan.

Is he worth the money?  No

Pat Kenny is a national institution.He became a television broadcaster on RTÉ’s Today Tonight , a current affairs programme in the mid 1980s. He moved in an unexpected direction when he   co-presented  the 1988 Eurovision Song Contestwith Michelle Rocca a. Subsequently, he had a guest slot on the weekly chat show Saturday Live which he went on to host   permanently as renamed Kenny Live!. Now over sixty he spent a long time as Ireland’s most eligible young man still looks and comports himself younger than his years.Kenny’s tenure at the Late Late has not been seen as a success. While the show still receives mass audiences, it has lost one third of its viewership since Byrne’s departure. A “revamp” of the show (which saw its distinctive signature tune and visual style dropped for one preferred by Kenny) was seen as having lost the show much of its character.  Kenny seems detached,.  You can hear it in his voice, especially.  It appears an effort to rise to each new topic on his radio show.  Gone is the passion.  Tubridy is more genuinely fired up, amused, spontaneous.  According to a the RTE Guide last year Kenny was angry (though looking tanned): “In Ireland today there is a culture of greed,” says Pat. “Every inch has got to be developed. Every commodity has to be brand new. It’s a case of ‘Keeping up with the Joneses’ in spades”. There is little real laughter around Pat Kenny.  Nor much apparent passion for the public, as opposed to accumulated private, good. He does the trips to Theresa’s Gardens and Fatima Mansions a but he doesn’t do them often enough and he doesn’t seem as passionate about it as he is about public-sector over-employment, excessive political correctness, high taxes  or his own property and salary.  He lost a packet on banks shares.  It seems he takes investment very seriously:  “I took all the advice that was on offer about Bank of Ireland and AIB shares, of course I did”. He is an engineer by training and this often pervades his approach to interviews where he is famously accused of being too wooden.  Apres Match mercilessly lampoons this including, in his defence, on his own programme.  One of the great joys of Irish television is Kenny’s  rictus smile when engaging with Richard playing a rictus-smiled Kenny on Kenny Live.  Murphy uproariously equated Kenny to Enda Kenny – another unloved and slightly awkward mega-force in Irish life. But the squareness goes deep.  A recent interview with Pete Doherty saw him metaphorically pick this most frivolous of youths up by the ears and crash him repeatedly against a barn door, metaphorically, for not being a role model for young people.  It wouldn’t occur to Pat that rockstars aren’t supposed to be role models. He does not appear to like to be seriously personally challenged.  So he ripped up the ticket to the Late Late show Christmas toy show live in front of half the country when a prize-sinner said she would take the holiday but not the ticket.  He subsequently somewhat egotistically declared that the tickets were more prized than those to President Obama’s inauguration. Nearly every year he evokes a contorversy like this.  Last year it was being heckled and attacked on the Late Late Show But self-awareness does not appear to be a forte. Unfortunately those of a subversive bent found it all too easy to imagine him over-reacting to his neighbour in a recent land-dispute in which he was alleged to have ran at a septuagenarian with his fists raised.  Only a wise judge saved the broadcaster from national hysteria. In his sixties, perhaps a little like Gay Byrne and probably due to a surfeit of exposure to the glamorous end of the country and an inevitable  concomitant inflation of the ego, he has a strain of contrariness.  Byrne became  obsessive about eliminating property taxes and pronunciation; Kenny gets upset by political correctness and zealous orthodoxies.  One of his specialities is indulging climate-change deniers such as Philip Stott and David Bellamy who has joined him on both tv and radio in the last few months to voice, largely unchallenged, perspectives for which he has been destroyed in the British media. He has something of a vested interest in CO2 emissions as he has been the lucky driver of a sponsored BMW. He is now buying it.  It would be interesting to know at what price.  RTE has refused to comment.

Irish Independent columnist Ian O’Doherty, who knows him, says Kenny is  “a good raconteur and enjoyable company”. He is “quite funny”, something that is not so apparent on television. O’Doherty who has written a number of “quite unflattering” accounts of Kenny in the past, says Kenny is not vindictive and does not take such harsh criticism personally. This is just as well.