“Things can only get better”, went the lyrics to the hit by D:Ream which became the anthem of the incoming New Labour government in 1997, fronted by the relentlessly upbeat Tony Blair. Six years later, Blair joined the US in its illegal invasion of Iraq, a move that plunged the entire Middle East into a new era of violent instability and a refugee crisis that today, some 15 years later, shows little signs of abating.

Things, it turns out, can also get worse. Statistics can, however, be schooled into presenting a beguilingly different picture of the true state of the world, and the darling of global optimism, psychologist and author Steven Pinker is a skilful inquisitor of data. His scholarship seems to have caught the zeitgeist of the latest wave of techno-optimism, and his data-fuelled Panglossian creed is being enthusiastically embraced by global influencers like billionaire Bill Gates.

So excited were the editors of Time magazine that in January, for the first time in its more than 90-year history, it invited Gates to be guest editor of an edition, titled ‘The Optimists’. His editorial was essentially a re-heat of Pinker’s tome, ‘Enlightenment Now’, which, Gates gushed, was his “new favorite book of all time” and “the most inspiring book I’ve ever read”. High praise indeed.

Gates’ benediction no doubt helped Pinker’s tome to become a runaway bestseller. What got the Microsoft über-nerd so excited is that: “this is not some naively optimistic view; it’s backed by data”. And Pinker cites data by the chartload, much of it undoubtedly painting an accurate picture of one species doing remarkably well.

Life expectancy is a case in point. In just the last 28 years, the number of children dying before their fifth birthday has halved. Women’s and LGBT rights have made remarkable, if uneven, advances in recent decades. Fewer people are living in absolute poverty. Child labour, slavery and sexual abuse have not been eradicated globally but all indicators point towards major progress for millions of people.

Catastrophic famines are rarer now; more people now live in democracies (Trump’s populism notwithstanding) than in all of human history and, while there are hundreds of deadly local and regional conflicts around the world, there are, mercifully, no full-scale wars between countries.

Were an 18th or 19th century European to survey the region today, they would be astonished to find that the perpetually warring great powers – France, Italy, Spain, Germany, the Netherlands and Britain – have enjoyed more than 75 years of peace, co-operation and prosperity, with just occasional insults now being hurled at one another, where until quite recently, disputes were routinely settled with bloodbaths and pogroms.

So, all’s well with the world, it seems. Another contributor to the Time special edition was the estimable investor and billionaire Warren Buffett. He waxed about the astonishing economic progress that swept across the US in the 20th century. No argument there. “The game of economic miracles is in its early innings. Americans will benefit from far more and better ‘stuff’ in the future”, he opined.

At this point, it’s time to take a deep breath and a sharp step backwards. How can such heavy-hitters as Pinker, Gates and Buffett have possibly discounted or ignored the ecological train-wreck hurtling ever closer towards humanity? Pinker’s book does indeed grapple – after a fashion – with environmental limits, but it’s hardly encouraging that someone who prides himself on offering numeracy as the cure for biases then launches – unprovoked – into a biased jeremiad against the “quasi-religious ideology” that is what he
disparagingly terms “greenism”.

For someone regarded as among the world’s great thinkers, this is dull fare indeed. Undeterred, Pinker lashes out at this “apocalyptic creed” which he finds to be “laced with misanthropy”. Quite why it was necessary for Pinker to denigrate environmentalism becomes clear as the narrative unfolds. The vehemence of his anti-environmental rhetoric is in inverse ratio to his ability to address the profound critiques of his beloved ‘progress’ posed by the findings of climate and environmental sciences.

He points out – correctly – that as countries get richer, they usually clean up their own rivers and ease local pollution. The fact that rich countries simply outsource much of their dirty heavy industries and ship their wastes to the ‘developing’ world is glossed over.

Climate change of course does not respect national borders; faced with the quite over-whelming evidence from the physical sciences (and he frequently claims to be an advocate for science), Pinker baulks at what he dismissively calls the “tragic” view that humanity may well destroy both industrial civilisation and itself in the process.

Pinker concedes: “humanity has never faced a problem” like climate change. Rather than ponder this existential threat, he instead brandishes the magic wand of eco-modernism and waves away the gloomy ‘eco- pessimism’ he and his billionaire fan club find so objectionable.

He points out that global carbon intensity has been static or declining slightly in recent years. The atmosphere is, however, indifferent to such subtle points. All that matters are the gross numbers, and these continue to climb inexorably. Science tells us we have a finite and rapidly reducing global ‘carbon budget’. The only way of avoiding irreversibly smashing through this budget in the next 10-20 years is drastic, compulsory, permanent and deeply unpleasant cuts in carbon, starting yesterday. 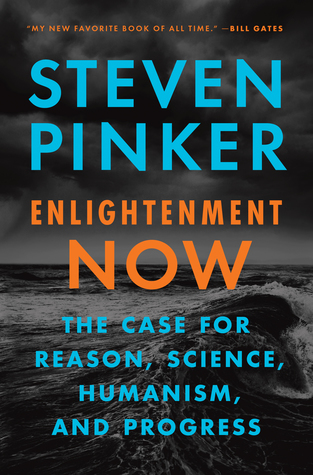 Per capita, the greatest carbon polluters on the planet are the global elite, billionaires like Gates and fellow Microsoft founder, Paul Allen. The latter maintains three very large ocean-going yachts at all times, so that one is always fully staffed and equipped close to wherever in the world he might happen to jet. That’s an awful lot of carbon to have to forego.

The eight richest billionaires control as much wealth as the world’s poorest 3.7 billion people. Imagine then how pleased Gates will have been to read Pinker’s pronouncement that staggering and increasing wealth inequality is really not that big a deal.

In common with Trump, Pinker also tries to blame the media for stoking “irrational pessimism” about the state of the world. I have long argued the opposite: the media has been optimistic – to the point of delusional – on its non-coverage of crunch environmental issues. He urges looking past the headlines towards “measures of human flourishing such as longevity, literacy, prosperity and peace”. This, he insists, isn’t just the start way to see the world, it’s “the morally enlightened one”.

It left me wondering how an 800-page book stuffed with charts, footnotes and graphics and claiming moral enlightenment could possibly have failed to notice the red-flag indicators emanating almost daily from the disciplines of physics, chemistry and biology. Where is the chart mapping the obliteration of natural habitats and the collapse in numbers of wild animals, which in the 50 years 1970-2020 are on target to have declined by an eye-watering 67%?

Where is the chart tracking atmospheric CO2 levels over the last 800,000 years, showing them to be at their highest level ever? Pinker omitted to mention that the last time there were over 400 parts per million of CO2 in the atmosphere, sea levels were 10-20 metres higher than today. Where for that matter is the graphic showing the rapid death of our marine systems from pollution and overfishing, not to mention the rate of ocean acidification due to carbon emissions being at its highest level in at least 300 million years?

Where, I wondered, is the pathway showing how we are somehow going to have to get from burning 36 billion tons of CO2 annually to zero – yes zero – tons, in the next 30 years if we are to have a better than evens chance of avoiding catastrophe? And where is the chart that explains how the world can feed an additional two billion people in the next two decades, especially with more meat and dairy in their diets, without tearing down the remaining rainforests and emptying what’s left in the plastic-choked oceans to feed 9-10 billion human mouths?

Pinker sneers at what he labels irrational pessimism, believing it to be “driven by a morbid interest in what can go wrong”. The Enlightenment of which Pinker is such an enthusiastic proponent was, oddly enough, propelled by people with a morbid interest in what could go wrong. These were the new breed of scientists, engineers and medics, who rejected learned wisdom and authority in favour of the unromantic rigours of the scientific method.

Engineers who design rockets or bridges are, I suspect, professional pessimists, always looking for flaws in their reasoning and weaknesses in their modelling and calculations. The same applies to climate scientists. After all, optimism gets people killed.

For a clearer picture of the economic miracles that Pinker lionises, US environmentalist Paul Hawken summed up succinctly: “we are stealing the future, selling it in the present, and calling it GDP”.

John Gibbons is an environmental writer and is online @think_or_swim