The debate on marriage equality has ignited many emotions. But there is one emotion that a positive outcome for this referendum has the power to quench: shame.

Love is a universal biological need. While loneliness kills, intimacy and togetherness improve health. For too long in the history of many countries including Ireland, lesbians and gays have had their ordinary affections unjustly slighted on the basis of ungenerous considerations. Excluding them from the institution of marriage implies that their attachment cannot be fully equated to the union between a man and a woman. It is like saying: Yes, of course you are entitled to enjoy your same-sex relationships, but while heterosexuals deserve marriage, you only get access to civil partnerships because, after all, you are different. This current view is offensive. It creates unnecessary social division.

It also kindles the shame that has lurked around being gay. Feeling shame is to believe that there is something inherently wrong with oneself and to doubt one’s worth. By having to put to the test of a country the worth of their companionships, lesbians and gay men are bound to question whether their emotional life is appropriate. Shame is a toxic emotion. It makes people hide their feelings and be less authentic in order to gain acceptance. It is a heavy cloak. A constant burden of shame is stressful and weighs on an individual’s psychological well-being, sometimes with consequences as tragic as suicide. Shame is pervasive. People who are not gay may also carry shame about homosexuality and, consciously or unconsciously, be influenced in their behaviour toward LGBTQ people. Maintaining civil inequality will certainly not contribute to eradicating outdated mentalities.

If two men or women are just inseparable, they are clearly made for each other, share crucial values and decide to spend the rest of their lives together, why should their union not be revered by the nation? Demanding marriage equality is not a whim, nor a curious request. It is a conceivable right. Experts have found numerous –apparently at least 160- concrete statutory differences between marriage and civil partnership that make the latter not a family and, therefore, less defensible in the eyes of the law. A marital union between two individuals of the same gender would also not be less human or less natural. Yes, marriage between a man and a woman does have a longer history. However, homosexual affiliations have been around long before the institution of marriage as we know it – anyone who has read a poem by Sappho can attest to that. As a social construct, marriage has evolved, is different among cultures and religions, and is susceptible to change. Extending civil marriage to everyone will not steal it from straight couples. On the contrary, refusing to give it to gay couples will continue to hold gay love as a lesser category of feeling, when it is, in fact, as noble, rewarding and fair as any other –as well as equally suitable for a thriving society. For those needing scientific proof from nature, there is no neurological difference between heterosexual and homosexual love. 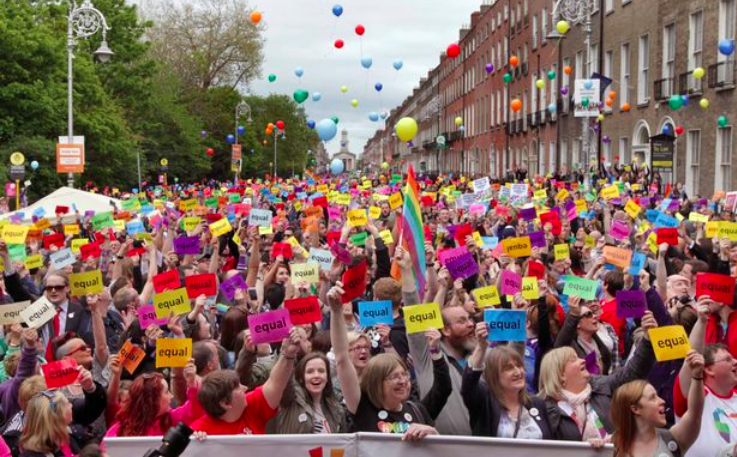 Coming from a country where there are no plans for marriage equality and stances toward gay unions are stifling, the mobilisation of supporters for marriage equality in Ireland has been humbling. It is heartening to witness from afar the work of tireless campaigners darting from one county to the next to ensure that important messages of fairness and solidarity are clearly heard at every corner. It is touching to watch people of all generations speak on YouTube in favour of a Yes vote: children and teen-agers who wish they could cast their ballot; hurlers demolishing clichés of GAA masculinity by demanding equality for all their team mates; parents affirming unrestricted love for both their gay and straight children; Catholics who never miss mass saying marriage equality should have happened years ago; elderly couples who want their grandchildren to fully avail of the same protection that has sanctioned their union for over half a century; straight guys who aspire to be best man at their gay friend’s wedding. These are all stories of inclusion showing that a lot has already changed in the way everyone perceives and interacts with gays. It also signals that Ireland is ready to take the culminating step –on paper– in guaranteeing equality.

By pure chance last week I learnt a useful new word in Irish. I was listening to a lecture by a legal researcher on the birth of the Irish Constitution, with a focus on the introduction of the word uisleacht. Dignity is central to human rights. We are reminded of its importance when someone is in need of respect. For me this referendum is much more than extending to gay citizens the possibility of sanctioning their unions under equal law. It is a chance to reassure all individuals they are worthy of protection and that they no longer need to hide or feel less dignified for the unconditional benevolence, kindness, devotion and togetherness they want to share with those they choose to spend their lives with. It is about recognising pure unreserved love. There is hope that passing this referendum will be a huge overturn of spare stereotypes and stubborn attitudes. It is important to vote yes on May 22nd to scrape layers of obstinate shame.

As a Sicilian child growing up, Ireland was the island of courageous heroes. I dreamt of one day standing in front of the GPO from where far-seeing men pledged to cherish ‘all the children of the nation equally’ and to the island’s ‘exaltation among the nations’. I will be in Ireland on the day of the referendum. However it goes, I want to be amongst the people I have admiration for and who, I hope, will see to seizing the precious and honourable chance they are being given.

Giovanni Frazzetto is an Italian neuroscientist, exploring the relationship between science, society and culture. He has published numerous books, including How We Feel, shortlisted by The Observer for psychology book of the year 2013. He has also written for journals such as EMBO Reports and Nature, and is one of the founders of the European Neuroscience and Society Network.