‘Reclaiming the State – a Progressive Vision of Sovereignty for a Post-Neoliberal World’ is the title of what will surely come to be seen as one of the more important social science works of our time (Pluto Press, 2017, €23).

In it Australian economics professor William Mitchell and Italian political theorist Thomas Fazi reconceptualise the Nation State as a vehicle for progressive change. They issue a highly topical challenge to progressives, leftwingers and genuine liberals to come to the defence of national sovereignty and not cede that issue to the populist right.

For the thirty years from the end of World War 2 to the 1970s a left-oriented Keynesian consensus held sway in the developed world. Then, for reasons this book describes, the mainstream Left as represented by the mass Labour and Social Democrat parties in Britain, France, Germany and elsewhere, and by the Democrats in the USA, ideologically disarmed themselves before rampant neoliberalism.

Key neoliberal propositions were that national sovereignty had become irrelevant in today’s increasingly complex and interdependent international economy. Globalisation had made individual States increasingly powerless in face of market forces. The growth of multinational companies and the internationalisation of finance had eroded the ability of national States to pursue progressive social and economic policies and deliver prosperity for their peoples. Consequently the only hope of meaningful change was to “pool” State sovereignty and transfer it to supranational institutions such as the European Union, thereby regaining at supranational level the sovereignty that has been lost at the national level.

Many who regarded themselves as progressive and on the Left came to share these views, stressing how neoliberalism has involved a retreat or a hollowing-out of the State, which found itself increasingly powerless in face of market forces. To cover their abandonment of criticism of capitalism as a social system, progressives and Left parties generally focused instead on issues such as racism, gender, homophobia, multiculturalism and environmentalism – social marginality being no longer described and opposed in terms of class but rather in terms of identity.

This book analyses the political timidity, ideological opportunism and intellectual fallacies involved in this surrender. For example the decades of neoliberalism have seen little or no decline in State spending as a percentage of GDP – a key measure of the strength of the State in society. Even supposedly neoliberal governments such as Reagan’s or Thatcher’s did not reduce overall public spending, although they altered its composition, for example spending more on weaponry and less on welfare. As the authors point out, “even though neoliberalism as an ideology springs from a desire to curtail the State’s role, neoliberalism as political-economic practice has produced increasingly powerful interventionist regimes.”

Neoliberalism has entailed extensive and permanent intervention by States and their Governments: for example the liberalization of goods and capital markets, the privatization of resources and public services, deregulation of finance, the reduction of workers’ rights in collective bargaining, cuts to social programmes and the lowering of taxes on wealth and capital at the expense of the middle and working classes. 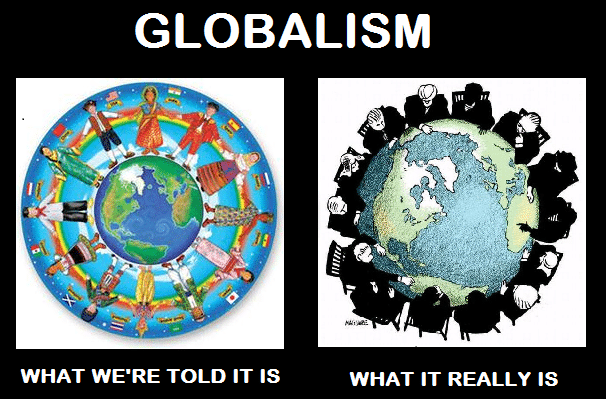 The authors show how neoliberal ideology, in its official anti-State guise, has been little more than a convenient alibi for what has been an essentially political and State-driven project aimed at placing the commanding heights of economic policy in the hands of capital and especially Finance Capital. Far from neoliberal globalisation making the Nation State out of date, all its key elements were the result of choices deliberately and consciously made by national governments as their ruling elites set out to limit State sovereign rights.

The authors call this a process of “depoliticisation” of policy. Its principal elements were: the reduction of the power of parliaments via-a-vis the executive; making central banks formally independent of government; adopting constitutional limits on debt-to-GDP ratios and public spending, as with the 2012 Stability treaty, thereby limiting what politicians can do at the behest of their voters; enforcing free movement of goods and capital, and, above, all shifting government powers from the national level to the supranational.

Why did national politicians choose to ‘tie their hands’ in this way ? As the EU case epitomises, the creation of these self-imposed ‘external constraints’ allowed national politicians to reduce the political costs to themselves of neoliberal policies that were generally unpopular. It enabled them to ‘scapegoat’ these externally imposed rules and supranational and ‘independent’ institutions. These could be publicly presented as an inevitable outcome of the new harsh realities of globalisation, about which supposedly little or nothing could be done at national level. In this way national government choices and State macroeconomic policies were insulated from popular criticism and protest.

Mitchell and Fazi contend that the war on sovereignty has been in essence a war on democracy. This process was brought to its most extreme in Europe where the 1992 Maastricht Treaty that created the euro-currency embedded neoliberalism into the EU’s very fabric, effectively outlawing in supranational EU law the Keynesian policies that had been commonplace in the previous decades.

Given neoliberalism’s war against State sovereignty it is only natural that the revolt against neoliberalism should first and foremost take the form of demands for a ‘repoliticisation’ of national decision-making processes – that is, for more democratic control over politics and particularly over the destructive effects of the free movement of capital, goods and labour unleashed by neoliberalism.

This necessarily can only be done at the national level by means of the national State in the absence of effective supranational mechanisms of representation. The latter are impossible to bring into being as long as people’s primary political identification is with their own nationality and State. Supranational structures will always lack democratic legitimacy because people do not identify with them as their own. The case of Iceland shows what even a tiny country can do when it used its State sovereignty, an independent currency, capital controls and sequestration of its banks to overcome an extreme economic crisis.

The authors argue that progressives and the political Left should not regard Brexit – and the current problems of the EU and monetary union generally – as a cause for despair but rather as a unique opportunity to embrace once again a progressive, emancipatory vision of national sovereignty, to reject the EU’s neoliberal straitjacket and to implement a democratic socialist platform, which is impossible within the EU, let alone the eurozone.

Reclaiming the State analyses the elements of such a nationally-based progressive socio-economic programme – central to which is State control of currency, credit and banking. The authors are confident that in the coming years the growing mass of citizens threatened by the forces of neoliberalism will more and more choose the reality of national democracy, imperfect though it may be, over the fantasy of a democratic global society of atomised individuals, which is the implicit vision of neoliberalism.

They recognise, however, that a compelling socio-economic programme is not enough to enable progressives win the hearts and minds of the people. If the political Left is to become relevant in the form of successful mass political parties again it needs to make its own the rhetoric of nationhood, as Ireland’s James Connolly and countless pioneers of the classical Labour and socialist movements did in their day.

They conclude: “Beyond the centrality of the State from a political-economic point of view, the Left has to come to terms with the fact that for the vast majority of people that do not belong – and never will belong — to the globe- trotting international elite, their sense of citizenship, collective identity and common good is intrinsically and intimately tied to nationhood… In this sense, a progressive vision of national sovereignty should aim to reconstruct and redefine the national State as a place where citizens can seek refuge in democratic protection, popular rule, local autonomy, collective goods and egalitarian traditions, rather than a culturally and ethnically homogenised society. This is also the necessary prerequisite for the construction of a new internationalist world order based on interdependent but independent sovereign States”.