The Head of the IMF, Christine Lagarde, drew attention to the issue of inequality at the 2013 World Economic Forum in Davos. She pointed to the fact that “excessive inequality is corrosive to growth; it is corrosive to society. I believe that the economics profession and the policy community have downplayed inequality for too long”. There is a huge body of research on the causes of inequality, the effects of inequality and the policy solutions that are needed to create the conditions for more equality. However, there remains a distinct lack of political will to tackle the problem head on.

Last month the Central Statistics Office (CSO) published the Survey of Income and Living Conditions 2011 (SILC) data on poverty and incomes in Ireland. On the basis of the adjusted figures combined with the latest data, there is some good news and some bad news. The key issue though is whether the overall picture with regard to income inequality and poverty in Ireland has changed.

In 2011, almost one quarter (24.5%) of the population (1,122,411 people) experienced two or more types of “enforced poverty”. This covers access to essentials such as home heating, hot meals and adequate clothing. Over half (56%) of single parent households experience “enforced deprivation”.

What social realities do these figures reflect? The reality for many is declining income with people generally finding it more difficult to make ends meet or having to “go without”. 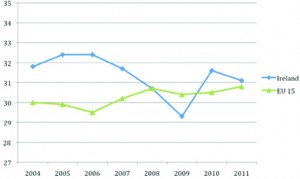 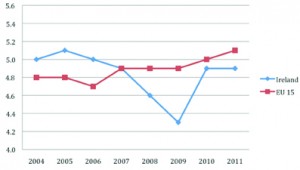 The Irish League of Credit Unions tracker survey “What’s Left” found that over 1.8 million people were left with €100 or less at the end of the month after essential bills were paid. The Commission for Energy Regulation reported that over 14,000 domestic electricity users were cut off in 2011.  There are now frequent reports of children going to school hungry. Charities across the country are reporting unprecedented demand for their supports and services at a time when their own budgets are being cut.

Other social realities include increasing levels of emigration, homelessness and suicide. Many of these have been exacerbated by the deteriorating economic circumstances that many people find themselves in after five years of austerity. These circumstances include a lack of employment opportunities; underemployment; pay cuts; increased cost of living; and debt levels.

Income inequality, therefore, did not jump quite so high between 2009 and 2010 as was previously reported. The gini coefficient figure for 2011 is 31.1, which means there was a slight reduction in income inequality. An EU (15 Member States) comparison shows Ireland slightly above the EU average (30.8). There is a general trend toward increasing inequality in the EU.

The quintile share ratio measures the gap between the top 20% of income earners and bottom 20%. The higher the number, the higher the level of inequality is. The 2010 figure (see Chart 2) has also been adjusted downwards from 5.5 to 4.9, which means that the jump in inequality from 2009 was not as high as previously reported.  The quintile share ratio for 2011 remained at 4.9, which means that, using this measure, the level of inequality remained static. We are below the EU (15 Member States) average (5.1). As with the gini coefficient there is a general trend in the EU towards increasing inequality using this measure.

It is important to remember that both of these measures are designed to be independent of the overall level of wealth and income in the country. This is useful when you want to compare two different countries but it means that the gini coefficient and income quintile ratio are limited when we want to compare the same country during different time periods.

That’s why it’s important to examine income trends more widely and over a longer period of time in order to get a more holistic and accurate picture of what is happening in relation to income inequality. There is growing interest in the study of the distribution of top incomes using tax data. The World Top Incomes Database http://topincomes.g-mond.parisschoolofeconomics.eu  is an invaluable resource which measures the top income share (of the national income pie) over a number of decades for more than twenty countries.

There is a growing consensus that the “big divide” in a growing number of societies is now less between the top, the middle and the bottom, than between a tiny group at the very top and nearly everyone else. The World Top Incomes Database provides the evidence that shows this divide has been growing in Ireland and many other countries, albeit at different paces, over the last number of decades. We need to focus on the top 1%. Failing to do so means that we miss the true impact of a change, which is described as “the degradation of middle classes to the ranks of the precariat”, by economist and Prix-Goncourt-laureate novelist Erik Orsenna.

What are the policy measures needed to start the process of reversing the trend of wealth being concentrated at the very top of the income ladder? We need a return to redistribution. As the Secretary-General of the OECD articulated, this is not without its challenges as “…from the mid-1990’s … the reduced redistributive capacity of tax-benefit systems was sometimes the main source of widening household-income gaps”.

What could be done to increase redistribution? Some of the options include progressive taxes that increase top income-tax rates, having luxury rates of VAT and more effective inheritance taxes. The restoration of the social safety net, based on an EU-wide unemployment insurance system, must also form part of the policy mix. There is also a need for a change to public attitudes towards tax avoidance and for global tax agreements to be strengthened. The latter appears to be gaining some political traction at an international level, following recent reports on the amount of tax paid by some multinationals. The OECD report Addressing Base Erosion and Profit Shifting highlights the need to ensure that tax systems do not unduly favour multinationals, leaving citizens and small businesses with bigger tax bills.

A return to redistribution must also be accompanied by policy measures that address the key drivers of inequality. These include the financing of, and access to, public services such as education and health; pay determination and collective agreements; incomes policies that strike the right balance between wages and profits; the regulation of financial markets; and public ownership of wealth through sovereign wealth funds.