In March 2003, the Minister for Communications, Mr Dermot Ahern, invited expressions of interest in the cause of religious advertising on RTE. Many of the submissions had the appearance of being orchestrated, and shared the same view: if advertising tarot cards is OK, why not religion? The outcome of the consultation process was that the Minister decided to leave well enough alone.

The context of Minister Ahern’s review of religious advertising – the Broadcasting Authority Act, 1960 and the Radio and Television Act, 1988 – was too narrow. The Constitution is paramount. In 1972, the people removed the recognition by the State of several denominations and the special position of the Roman Catholic Church. Consequently, the State is, in theory, essentially neutral as and between all belief systems. Of course we know this is not the case, but it is a reasonable goal. Statute law relating to equality between gender, religion, etc, is another constraint. Civilised standards of decency and social policy oblige the state to be even-handed or better in the treatment of law-abiding minorities. This requirement was taken to the extreme in the Supreme Court judgement in the McKenna case which assured equal radio and TV representation of antigovernment view in referenda. Neutrality and equality would have been better guides than the legislation for the review.

At present broadcasters cannot take paid advertising from any religion or group of religious interests, even if it only to create awareness of innocuous and inoffensive matter such as newspapers, magazines, events or campaigns. An example of this absurdity is the rejection of a harmless advertisement for Veritas, the Catholic publisher, this Christmas. However, the paid religious- advertising impediment is regularly circumvented through the editorial control of unpaid ads and propaganda about religious themes, which are a charge against broadcasters’ revenues. The most controversial is the Angelus which was introduced at the behest of the Episcopal bully, John Charles McQuaid, some 50 years ago. It is broadcast at peak time at considerable opportunity cost to the broadcaster and those who pay it. There’s also Newsround’s TV coverage of religious processions, the merits of Padre Pio, Opus Dei, etc. Like all advertisements, nothing is challenged; they are all of the ‘soft sell’ kind. Editorial discretion comes from persons ranging from those broadly supportive of religion, through to closet zealots. Because of its Constitutional obligation to respect religion, the State cannot easily facilitate unfettered criticism of religion. There is tension between this and other Constitutional imperatives not to endow religion, not to discriminate or make any disabilities on grounds of religious belief or unbelief, or the religious status of a person, and the right to freedom of expression.

Conundrums which must be faced.

In facilitating or supporting organised religion in any way, it is time the Irish State faced several conundrums which it and the mainstream media have not faced to date. They are all the more pressing now:

The Campaign to separate Church and State would prefer if religions did not have these rights, nevertheless we respect the right of others to differ, but only on condition that none of them is allowed to dip their hands into the State purse to benefit their institution.

This is merely another expression of the Constitutional prohibition of the endowment of religion by the State. If the State believes that taxes should be used in support of religious endeavour, there is the German remedy: levy a discretionary religious income tax for these purposes.

At present RTE – unlike commercial broadcasters – provides religious services, usually weekly. These facilitate the needs of house- or hospital-bound members of a few denominations, enabling them to join in a communion of worship. The facility does not extend to the growing number of immigrants – many with a foreign tongue – who are geographically scattered and who follow Islam, Hinduism, or Christian ‘hot gospel’ or ‘bible-hall’ sects. The Irish Times (8th December) claims that there are now over 360 migrant-led churches.

The current, free-broadcast, religious programming restricted to a few favoured Christian religions is discriminatory and seems to be contrary to the Constitution and The Equal Status Act, 2000.

Uncritically presented religious editorial material advocating religious beliefs can constitute endowment of religion by the State where the broadcaster receives mandatory licence fees. It is inappropriate and should not be permitted. It is also objectionable if broadcast from any station taking commercial advertising; in a liberal society it is unfair to require the general public to subsidise religious propaganda through such revenue.

The present system of free, religious broadcasting must be reformed so that it is subject to critical and balanced editorial control and conforms to Constitutional and Statute law. The absolute prohibition on religious advertising is contrary to the Constitutional entitlement to freedom of expression by religious and by humanist groups.

This has been done, to some extent by RTE TV. Within this framework, broadcasting stations wholly financed by churches and established primarily for the promotion of denominational purposes, would, if subject to public order and morality, be lawful.

Free broadcasting of religious ceremonies generally aimed at the sick, or infirm, or scattered minority denominations and humanist groups, if done in moderation by the media at their own discretion and in compliance with equality legislation appear to be justifiable in terms of civilised, social policy.

Time for thought on RTÉ and the Angelus

As the Holy Year of 1950 approached, Radio Éireann officials were considering ways in which the station could mark the occasion. During the late 1940s, the Secretary of the Department of Posts and Telegraphs Leon Ó Broin had discussed the idea of a daily broadcast spoken Angelus with Dr McQuaid, the Archbishop of Dublin. Charles Kelly the Director of Radio Éireann was also consulted but Kelly was not in favour of this proposal. After further discussion they concluded “…the introduction of speech would be a mistake and we should experiment further simply with a bell…” 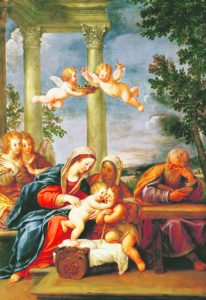 Initially, they considered using a gramophone recording of an Angelus bell; this would be easier to manage and there would be no wind-noise, birdsong, and mechanical noises. There was also the issue of the punctuality of a human bell-ringer. However despite these drawbacks, the decision was made to go ahead and to broadcast a ‘live’ bell. The task began to find suitable bell-tower where a microphone could be safely installed. In 1950, only one church in Dublin had an electrically operated bell, the Franciscan Church in Merchant’s Quay. This church was inspected by Mr Ferguson the Radio Éireann Engineer but it was quickly made clear that Dr McQuaid preferred the Pro-Cathedral bell to be used.

Leon Ó Broin told Charles Kelly that the Archibishop “…is inclined to insist on the relays being taken from the Pro-Cathedral; so we may take our cue from that.” Diplomatically, Charles Kelly had also listened to the Pro-Cathedral bell and found it had a “nice quality and pitch…The matter has reached the stage where the principle of doing the thing is agreed and how it can be done is one for engineering minds”.

Dr McQuaid, who had an interest in horology, had also asked that the first stroke of the bell should be at 6 pm. precisely. This meant automation and a foolproof clock system. The engineers led by Mr JM Ferguson set to work and a ringing mechanism was discussed and designed by him. As to the number of strokes of the bell, Archbishop McQuaid had directed that the sequence 3-3-3-9 was the correct format allowing for the recitation of the prayers. The Irish Press reported in August 1949 that “about December next the sound of the Angelus bell will follow the six o’clock time signal from Radio Éireann…” On Wednesday 23 May 1950, the minister announced that arrangements were being made to have the Angelus rung over the air each evening at six o’clock. Equipment was being installed in the Pro-Cathedral for the operation of the bell automatically, this was controlled by a master clock in the GPO. While the mechanism rang the bell twice daily, “only evening peals will be broadcast”. Delays in delivery of the special mechanisms meant the January 1950 the deadline was not met. It was then decided that the next most appropriate date was the Marian Feast of the Assumption on 15 August. According to reports, the blessing was attended by virtually the entire management of Radio Éireann. The Angelus has been broadcast almost every day since 1950. When television opened from 1962, the ‘Angelus Bell’ was played from a tape and accompanied by old master paintings of the Annunciation. Periodically, the broadcast Angelus becomes the focus of public controversy but it can claim its place along with news and the weather forecast as the longest running ‘item’, if not programme, on RTÉ.