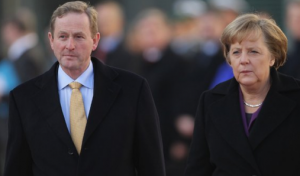 With Germany reluctant to allow debt write-downs least of all by Ireland it’s interesting, as Patrick Guinness notes in a comment on Constantin Gurdgiev’s recent article, how little attention has focused on Ireland’s signature on a 1953 bailout for Germany.

The London Agreement on German External Debts between the Federal Republic of Germany on one part and  Belgium, Canada, France, Greece, Iran, Ireland, Italy, Liechtenstein, Luxembourg, Norway, Pakistan, Spain, Sweden, Switzerland, the Union of South Africa, the UK, the USA, and Yugoslavia among others. The Agreement comprehended a number of different types of debt from before and after the second World War. Some of them arose directly out of the efforts to finance the reparations system, while others reflect extensive lending, mostly by US investors, to German firms and governments.

The total under negotiation was 16 billion marks of debts from the 1920s which had defaulted in the 1930s, but which Germany decided to repay to restore its reputation. This money was owed to government and private banks in the U.S., France and Britain. Another 16 billion marks represented postwar loans by the U.S. Under the London Debts Agreement of 1953, the repayable amount was reduced by 50% to about 15 billion marks and prolonged over 30 years, and in the  context of a fast-growing German economy was of minor impact.

The agreement significantly contributed to the growth of its post-war industry and  allowed Germany to enter international economic institutions such as Gatt, the IMF and the World Bank.

Germany finally cleared its First World War debt by repaying nearly €80 million in October 2010. The reparations were set by the Allied victors  as compensation and punishment for the 1914-18 war.

The reparations were set at the Treaty of Versailles on June 28, 1919, by the Allied victors – mostly Britain, France and America. Most of the money was intended to go to Belgium and France, whose land, towns and villages were devastated by the war, and to pay the Allies some of the costs of waging it.

The initial sum agreed upon for war damages in 1919 was 226billion Reichsmarks which was later reduced to 132 billion.