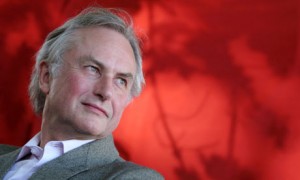 ‘if you want to understand life, don’t think about vibrant, throbbing gels and oozes, think about information technology”.

Sitting in Richard Dawkins living room is pleasant. The first thing you notice is the volume of books blanketing every wall. On the top shelf I spot a copy of ‘The God Delusion’. Nietzsche may have declared the death of god over 130 years ago, but Dawkins is perhaps the most famous exponent of the view that secularism is the only rational option when it comes to a belief system. Due to the wave of controversial publicity this book received, when it was published in 2006, many people still see him as an angry, arrogant atheist but in person the man himself is placid, courteous, a perfect old-school English gentleman, speaking in slow, authoritative, sentences: a skilled debater, and a fountain of knowledge. Dawkins’ area of expertise indeed is not religion, but evolutionary biology.

His latest erudite book: ‘The Magic of Reality – How we know what’s really true’ roves far from this base. Teaming up with the illustrator Dave Mc Kean, the book – peppered with cartoon-style images – explains the science  behind  natural processes such as earthquakes, rainbows, evolution, space and time, and how languages are formed.

Everywhere he distinguishes between myth and reality, fact and fiction, encouraging children to ask rational questions about why things happen on this planet. For example in the first chapter entitled Who is the first Person? Dawkins explains the myth of the Garden of Eden. He then goes on to explain, in a very simple way, the theory of evolution.

Most scientific concepts are intelligible to children, says Dawkins, and his book aims to prove it.

“I think evolution doesn’t enter the national curriculum until the age of about fourteen, it’s part of my ambition to get that changed. Some people think it’s a concept too difficult for children to grasp. I disagree”.

While Dawkins wants to discourage the notion of spells and supernatural magic, he says he is well aware of the value that myths play in cultural and historical heritage, and literature.

“The Old Testament and The Greek and Norse Myths – I could have added the Celtic Myths, which are beautiful – these are all important tales for understanding English literature. Children should know the mythical background to literature: you can’t read Keats without knowing The Greek Myths for example”.

You sense somehow that this latest book is a little tamer and won’t cause the sort of controversy or notoriety that characterises some of Dawkins’ other books. For example, ‘The Selfish Gene’, (written in 1976, selling a million copies) was misinterpreted by many readers. In the book Dawkins postulated a revolutionary biological hypothesis, entitled the selfish gene theory. This stated – in Darwinian terms – that everything that human beings do is driven by genes which are necessarily inherently selfish in order to maximise their chances of survival. However, the book also goes on to to explain how altruism is an evolutionary trait, and why it is of benefit to mankind to act with kindness. How does Dawkins react to people who misinterpret his work?

I ask him about the woman in Australia who wrote him a letter after reading the book, telling him she thought her life wasn’t worth living and  who tried to commit suicide.

“Well if you come at life from a religious point of view and you feel your life has a purpose, and you’re then subsequently told that you’re a survival machine for your genes, it makes you feel futile and sort of useless. But you have to overcome that by realising that that’s only the interpretation of a Darwinian view of why you are here, but we can each make our own purposes in life, and we do. The purposes we have in life are varied, they could be: to write a book, to learn to play the piano, to get married to a certain person. In our day-to-day existence we don’t feel as though we are survival machines for our genes”.

Dawkins declared in his 1986 book ‘The Blind Watchmaker’: “What lies at the heart of every living thing is not a fire, not warm breath, not a spark of life. It is information, words, instructions…. if you want to understand life, don’t think about vibrant, throbbing gels and oozes, think about information technology”.

When I ask him how far technological advancement will change the human mind, he is reluctant to make predictions without evidence, but is keen not to underestimate the potential power that computers may have in the future.

“The whole molecular genetics revolution since Watson and Crick (the scientists who discovered the double helical structure of the DNA molecule in 1953) has been the digitisation of life, and it is astonishing, revolutionary. So a large part of biology – genetics – is information technology. Brains haven’t got that far yet. But it is possible that in the future computers will increasingly take over brain function. Philosophers already speculate about a situation where you download your brain’s entire  contents into a computer and the computer does the thinking for you after you are dead. These are all science-fiction-type speculations that are not totally to be ruled out. If computers/ robots/ machines are given the capacity to reproduce, then they could evolve”.

Dawkins coined the word ‘meme’ back in 1976. He argues that running parallel with our genetic evolution, is a cultural evolution in man. Just as genes jump from body to body, via sperm and egg, so too memes (ideas) pass  from brain to brain. A meme, according to Dawkins, can parasitise a brain, turning it into a vehicle for the memes’ propagation, in just the way that a virus may parasitise the genetic mechanism of a host cell.

“It’s a Darwinian metaphor – that which survives is fit by definition. So if a bad meme like, say, Nazism thrives, then it survives and from a Darwinian point of view, it’s good, not from anyone else’s point of view. The idea of a meme itself is ideologically neutral, it can be bad or it can be good. Nazi memes survived for a while, but ultimately they became extinct. We can put value on memes, however. The meme of teaching children about hell fire is a bad meme. I think most religious memes are bad”.

Before leaving, I ask Dawkins about his campaign to get Pope Benedict XVI, upon his visit to Britain in 2010, tried for crimes against humanity. The campaign never built any real momentum, but he did, along with his friend Christopher Hitchens, pay for a lawyer to make a case.

“I paid for half the legal costs, and Christopher raised money in America to pay a top London lawyer, Geoffrey Robinson, to make the case for the prosecution. It was never actually offered to the Crown Prosecutors, but Geoffrey wrote a book about it called: ‘The Case of the Pope’, any person who wants to, can make use of this book and see the indictment that was prepared. I didn’t seriously think he would be tried, but it seemed like a good symbolic gesture”.