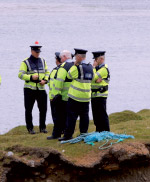 An Bord Pleanála (ABP) has rejected the proposed route for the Corrib pipeline as “unacceptable” on safety grounds. The ruling was unequivocal: houses along the route were “within the hazard range of the pipeline should a failure occur”, while “design documentation” and “risk assessment” fail to “present a complete, transparent and adequate demonstration that the pipeline does not pose an unacceptable risk to the public”. The decision  also noted that Shell failed to include part of the onshore pipeline route in its application. The ruling vindicated a ten-year campaign which has seen local residents become experts on complex, technical aspects of gas production, while they also learnt a thing or two about state persecution and political treachery.

While An Bord Pleanála’s statement clearly dismissed the project in its current form, it also contained a disturbing conclusion, that “provisionally” the board would “approve the proposed onshore pipeline development should certain ‘alterations’ be made”.

Shell must respond by February 2010 but their options are limited as the company has already discounted alternative routes on financial and environmental grounds.

If the board decision vindicated the campaign to halt the project on health and safety grounds, the Garda Ombudsman Commission report performed the same service on the issue of civil disobedience. The Commission upheld 75% of complaints by citizens against gardaí, acknowledging that the number and nature of complaints were unprecedented.

From the commonage in Rossport to the refinery site at Bellanaboy; from the solidarity camp at Glengad to the high seas beyond, gardaí display deference and loyalty to Shell, while acting aggressively against local people engaged in civil disobedience. Colm Henry, a resident of Glengad, made a complaint to gardaí in 2008 when Shell security repeatedly filmed his grandchildren as they undressed on Glengad beach. Inspector John Gilligan promised to do something about it. “If this was happening near my home I’d probably be doing the very same as you are” confided Gilligan. The garda complaint was followed by more intense surveillance as security workers returned with cameras and binoculars focused on the Henry household. The following day, when Mr Henry returned to the garda station, Inspector Gilligan threw his hands in the air: “I know what you’re going to tell me”, he said, “I’m really sorry about it”. Henry believes that Gilligan was genuinely unhappy at the situation but was powerless to interfere with Shell’s security operation. Gilligan’s prior assurances to the Henry family arose from personal assurances from a senior Shell employee, an entirely inappropriate procedure from a member of the gardaí.

On another occasion, members of the community obstructed drilling work by Shell on a Special Area of Conservation (SAC) but when police arrived they ordered the locals to leave under threat of arrest and allowed Shell to resume work.

The Garda Ombudsman Commission forwarded seven files to the DPP of which one case resulted in a recommendation of punishment against a senior garda. The 111 complaints made to the commission represent only a small sample of popular grievances. The Ombudsman Commission’s press spokesman, Graham Doyle, explained that a survey identified two factors which kept many people from making formal complaints: people believed nothing would be done or that it would make matters worse for them in relation to the Gardai.

Garda sources have consistently given statements to the press which indicate their loyalty to the developer: “If we didn’t have some of the outside agitators coming in there wouldn’t be a problem with the handful of locals that oppose the project”, Supt Michael Larkin told the Sunday Times.

In late November fisherman Pat O’Donnell received a curt letter from Superintendent Larkin at Belmullet garda station, informing him that “the DPP has directed that there will be no prosecution in relation to the sinking of the Iona Isle”, a reference to O’Donnell’s boat, which was sunk last June. At the time of the incident garda and media speculated freely that O’Donnell had scuttled his own boat, with solid leads being pursued and imminent arrests ahead. The bluster concluded with the 19-word statement above, which the media duly ignored. There is no indication that the garda inquiry into the lost boat extended to private security operatives at Glengad who allegedly recruited Irishman Michael Dwyer for a Bolivian mission ,which resulted in his death. A recent Prime Time report into the Dwyer affair showed Dwyer’s boss, Eduardo Rozsa Flores, angrily lamenting on camera a missed opportunity to blow up a boat carrying members of the Bolivian government. Just a coincidence?

Christmas came early to Mayo and Pat O’Donnell received another letter, this time inviting him to a festive dinner for “stakeholders and supporters” of the Corrib gas project. This belated counter-factual acknowledgment of O’Donnell’s “support”  for the project is apt recognition that the hard work of many Erris residents will secure a safer gas project, its terms renegotiated to ensure a better deal for the Irish state.