One of the many social changes that sociologists and social historians of the future will examine is the change associated with participation in competitive sport in Ireland over the past twenty years.
Throughout the twentieth century rugby in Ireland was a participation sport centred on clubs throughout the 32 counties, with many clubs fielding at least 8 teams on a weekly basis. It has now become a spectator sport, with most clubs having difficulty fielding more than three teams.
Although most public attention in the past centred on the performance of the first teams in those clubs, the purpose of the clubs was to facilitate men – young and not so young – who wished to play rugby for enjoyment and social interaction. In fact, the reason men played rugby was not because they wished to achieve sporting excellence but because they enjoyed the game and the associated social life.
That purpose has now vanished from Irish rugby clubs. Rugby clubs in Ireland can now be more accurately assessed when viewed in a pyramid structure.
Where clubs are very strong and socially active is at underage, mini-rugby level. Rugby clubs throughout the country are now extremely busy every Sunday morning with young boys and girls learning the game, coached by volunteering parents who enjoy the social engagement generated by their children’s involvement in underage rugby.
Once these children reach the age of 12, the attraction and availability of the sport becomes narrower. There are very few options for girls between the ages of 12 and 18 who wish to continue playing rugby. For boys, those who go on to attend rugby-playing schools are set on a path that involves them playing for their schools, while those who don’t attend rugby playing schools and who wish to continue with the game will find it difficult to find a club where they can play rugby at a competitive level between the ages of 12 and 18.
At school the level of training and commitment required of young rugby players has become enormous; in some ways suffocating. The objective in schools, unfortunately, is no longer about participation but about winning and the attainment of excellence.
By 16 years of age coaches can tell whether a player may achieve excellence. They can also identify for certain those who will never achieve excellence. This marks the first stage of a filtering process that has the effect of discouraging many young players from playing the game.
Traditionally, players who left rugby-playing schools continued to play in a club or university. Those clubs also attracted players who didn’t play at school but who wished to pick up the game for the first time at 18. Neither of these circumstances occurs anymore. Those who leave school and who are not destined to play rugby at a high level – even within a club – retire from the game. Those who at 18 have never played will only be treated seriously by coaches if they display unusual ability or physique.
The change that has occurred is that no longer do young men want to join a club to play social rugby. The reason for this change appears to be twofold. First, participation in rugby is now achieved, or purportedly achieved, by watching a provincial team. The significant increase in attendances watching professional rugby matches is, in part, explained by the opening up of rugby to a new spectatorship. It is also explained by the fact that people who previously played club rugby at weekends now prefer to watch rather than play. 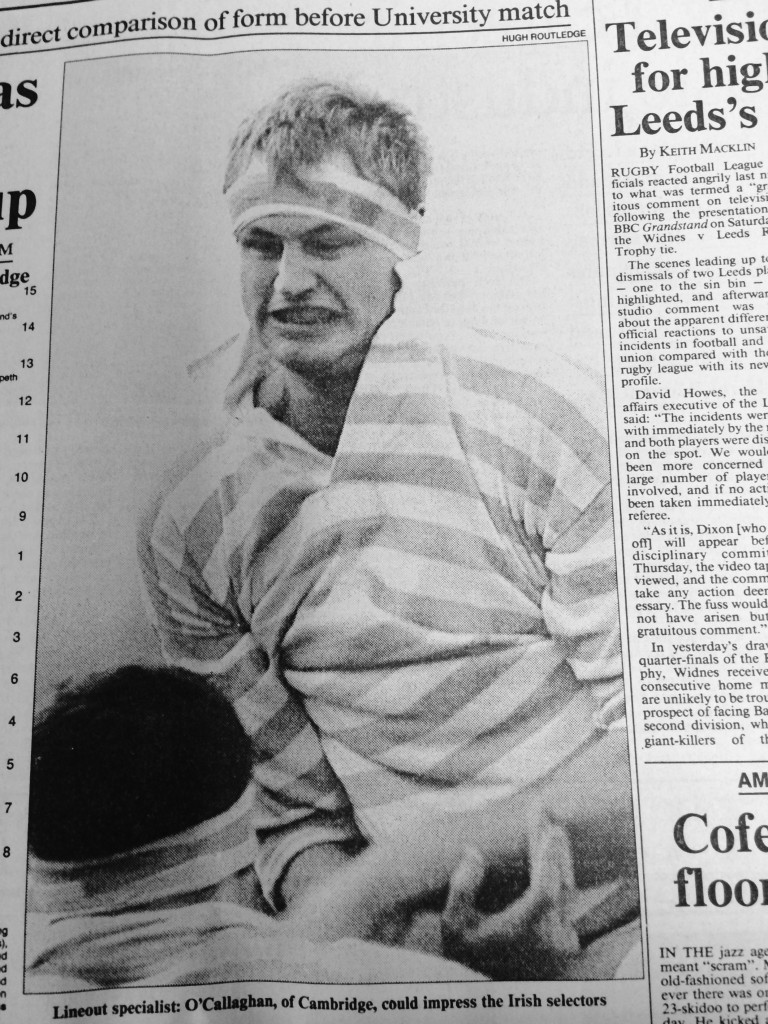 Second, our society now confers much greater respect on, and emphasises, achievement and excellence rather than participation and enjoyment. It is also true to say that parts of our society denigrate participation in a senior sport that does not attain excellence. This also explains the increased interest and participation in tag rugby during summer months. People play this because it is primarily about fun. It does not expose people to the perception of mediocrity that may be associated with a 24-year-old playing junior rugby for a club.
The net effect is that the number of men playing rugby after the age of 18 has now decreased considerably. The majority of those who continue playing after the age of 18 are extremely committed and believe that they can attain sporting excellence. However, the avenues are so precarious for talented players in this age group that many of them stop playing in their early and mid-20s.
A talented rugby player leaving school who is offered a provincial contract has little opportunity to develop any other career to see him through most of his working life. If contracted to a province and therefore employed to lift weights, watch videos and play matches (which many do not enjoy), it is virtually impossible to train for another career. The effect is that by 23-24, a player will know whether he is destined to make it in professional rugby. Many of those who are not so destined decide at that stage not to revert to club rugby but instead to retire from the game completely. Although they may have attained excellence without recognition, many do not wish to ‘regress’ to playing club rugby.
The effect of these changes upon Irish club rugby is that a very small number of men between the ages of 20 and 30 now play rugby in the clubs. Most of them are playing still in the pursuit of excellence and professional recognition. Very few now play club rugby for social interaction or enjoyment. The involvement of parents in mini rugby has grown MEMBERSHIP in many clubs but the absence of players in the 20-30 age group reveals the decreased involvement that rugby clubs have in Irish social life.
The decline of adult participation in club rugby is in marked contrast to the high levels of adult participation in the GAA. Unlike the IRFU, the GAA recognises the important social role it played and continues to play in Irish society. As an organisation, it has not become obsessed with a small number of teams that may achieve sporting excellence. The purpose of the GAA is markedly different from the purpose of the IRFU. The former recognises the important social role it plays throughout the island of Ireland in seeking to increase participation, youth and adult, in Gaelic games. The IRFU’s purpose has become too closely associated with the achievements of the national and provincial teams. Its primary purpose is now professional as opposed to social.
The cause of this significant social change in Irish rugby over the past 20 years has been professionalism. Money has changed the game. Rugby in Ireland is becoming like American Football. In America young kids play American football but by the time they get to High School certain players are recognised as having the potential to achieve sporting excellence. They are awarded scholarships to American universities where the game is virtually professional. A smaller group then will graduate on to the NFL. There is no real amateur game in the United States. It has become a spectator sport with thousands of young adults manifesting their interest in American football by sitting in stadia or on couches watching football and getting fatter.
It is a tragedy that in Ireland club rugby is going down the same route. Ultimately, the only people who will play rugby in their 20s in Ireland will be full-time professionals who have an obsessive and all-encompassing interest in the game. This is damaging to them and the cultural benefits that arose for generations of people who participated in Irish club rugby.
Unfortunately, this significant social change happened without any analysis, strategy or effort to halt its decline.
The IRFU needs to recognise that unless it tries to resurrect amateur rugby in this country it will be left with a freakish game that will provide no social benefit. •