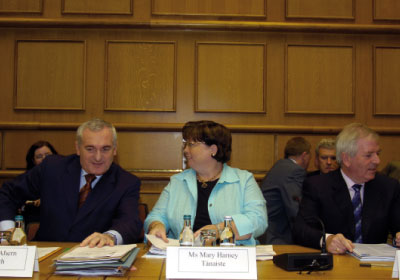 The Harney Health Legacy 1997-2011 – waste and the demise of universal healthcare, but improved cancer care

As each day passes, the damage this government has done to the people of Ireland and their health becomes clearer. Government policy since 1997 created the biggest boom and bust experienced by any first-world country since the 1930s. Despite becoming one of the richest countries in the world, even at the height of the boom, the Fianna Fáil/PD government failed to invest sufficiently in social infrastructure, even though there is a direct link between social spending and quality of life. Government policy was often flawed. And much of the money actually spent was poured in without actually changing or improving the services it was funding. There is no better exemplar of the fiasco that is Irish policy making than health.

Giving generous tax breaks to developers to build private nursing homes and hospitals, granting and then taking away medical cards for over-70-year-olds and the appallingly-orchestrated establishment of the Health Service Executive are textbook examples of how not to improve health services in the public interest.

The tax-breaks were masterminded by Charlie McCreevy – one of the myriad property-related tax-breaks introduced under his stewardship in the Department of Finance. They allowed for-profit  healthcare to get a foothold in the Irish ‘market’ without any supervision or oversight by the Department of Health. As a direct result nursing homes were built wherever developers wanted them – unconnected to need, and usually far away from older people’s homes and communities. Similarly, although it was government policy to have fewer, bigger, safer acute hospitals, another arm of government was giving away public money to build small, profitable, unregulated  hospitals anywhere they decided, totally contradicting the policy.

The decision to give medical cards to over-70-year-olds in December 2001 was a (successful)  pre-election ploy to get the grey vote out for the re-election of the Fianna Fáil-PD government in 2002. Paradoxically this move by McCreevy was to be the only endeavour of the government during its 13-and-a-half-year reign to provide universal healthcare, free at the point of delivery. And it was a very successful experiment with ‘richer’ over-70-year-olds accessing healthcare earlier as they did not have to pay to see the GP, which in turn kept them healthier, improved their quality of life; and cost less.

As the decision was a last-minute call by McCreevy or his champion, Bertie Ahern (the stories are legion and so far unverifiable as to how this decision actually got made), the government then had to negotiate a very bad deal with GPs who (led by now-TD James Reilly) stretched them over a barrel. As a result, GPs were paid three times the rate for looking after richer over-70s than those who already had medical cards. This skewed GP services so that doctors were paid more to provide care to those who needed it least.

And then in October 2008, with the excuse of the economic crisis, the government unwisely made the controversial call of removing medical cards from richer over-70-year-olds. After about four changes of mind, Mary Harney won the war – the universalism was withdrawn – but older people won the battle, as many more older people have medical cards now than they did in 2001.

The establishment of the HSE is the biggest public-sector reform in Irish history. Prepared by Mícheál Martin but executed by Mary Harney, there is no doubt that it was a débacle in waiting even before it began. It was badly planned, it had no leader for the first seven months – with an ex-banker as acting CEO, there was no clarity what would actually happen, no proper structures, no vision. Most incredibly, it failed to address the biggest reform needed in the Irish health system – to provide universal, quality care, free at the point of delivery – which essentially exists in  all other European countries. Not in Ireland.  In fact this government has been, and continues to busy itself, removing any last vestige of universalism in the Irish health system, now all in the name of austerity.

There had been increased investment in the Irish health system. The health budget quadrupled from under €4 billion in 1998 to over €15 billion in 2008 (it will be just €14 billion in 2011). But increased investment in the noughties was really only making up for decades of under-investment and neglect. There have been numerous attempts to reform but really what we have seen is so-called reform, without any real transformation. The renegotiation of the consultants’ contract was expensive and a lost opportunity to reform the Irish health system. Instead of using the new contract as a mechanism to deliver equitable, quality care, it continues to reward consultants who practise privately and publicly.  It paid them two to three times the salaries of their European counterparts and moved us nowhere nearer a universal system of care.

Six years on from the instigation of the HSE, there are a few glimmers of hope. The new HSE CEO, Cathal McGee just drove through a €200 million cut in money paid to pharmaceutical companies and is looking to save another €170 million through hard-nosed bargaining with its top 50 suppliers. Barry White, the HSE national director of quality and clinical care, is trying to a start a quiet revolution whereby care would be provided on the basis of medical need, not ability to pay. Basically he is applying the old cancer tsar’s method to all diseases, at all levels of care. He calls it ‘clinical justice’ and is involving staff at all levels and is even engaging with patients. It’s a long uphill marathon but it is certainly worth a try.

Cancer care is an illustration of where genuine progress has been made. It took decades of politicians affected by and interested in the disease to give it priority. Political commitment combined with abysmally bad cancer-survival rates for Irish people and a series of healthcare scandals propelled it to the top of the agenda. Tom Keane was put in charge of cancer care, money was ring-fenced and plans were actually realised. Despite all the political and public opposition, cancer-care was moved from 30 largely unsafe hospitals to eight safer hospitals. Of course it is nonsensical that there are four cancer centres in Dublin and none north of Dublin and Galway – another political manoeuvre emblematic of the cowardice. But overall, the eight specialist centres combined with nationwide breast-check, the introduction of the HPV vaccine, universal cervical screening for women and planned colo-rectal screening are all positive public-health-service developments which will result in better health and longer lives for many.

The so-called Four Year National Recovery Plan baldly lays down that “the traditional model of completely free provision is not sustainable”. It also specifies two clear policy developments in health. First, to begin to charge people for homecare services such as home helps, public-health nursing and therapists, in a way similar to the Nursing Home Support Scheme (the ironically named Fair Deal). Currently these are provided free to those who qualify. Second, it outlines a tiered system of access to GP care. Under this, the status quo will continue for those with medical cards, while those on low income and/or with chronic illness who do not have medical cards will pay much cheaper fees for GPs and drugs.  Everyone, even the rich, will pay less for accessing GP and prescription drugs.

However, the legacy of the McCreevy/Harney axis remains ubiquitous. Even though McCreevy is long gone and Harney is a minister without a party or a mandate, their neo-liberal ideology persists. This is evident in the last four budgets which have transferred payments for care from the State to patients. These budgets have also driven down people’s incomes through tax increases and new levies and cuts to social welfare, the minimum wage and public-sector workers’ pay. All of these measures will increase poverty and lead to poorer health.  For healthcare practitioners it is extraordinarily frustrating that people have less to spend on essential health services, which they need more, and many of which now have to be paid for or are more expensive. You could not make it up!

Sara Burke is a journalist and health-policy analyst. She is currently doing a PhD in health policy in Trinity College Dublin.  www.saraburke.com