2016 was inevitably an outstanding year for the history industry as publishers, writers, and those elements of the intelligentsia that love a good commemoration got to work on the Easter Rebellion’s hundredth anniversary.

The Irish people have an interesting relationship with their own history. It is, like their relationship to Catholicism, frequently the subject of fervent debate, at certain period followed slavishly as orthodoxy, and on other occasions the subject of shame. In the more modern Ireland that began to emerge from the 1960s a new revisionism took hold about the history itself.

Revisionism itself became a pejorative term as scepticism about our history joined forces with those who would be sceptical about the benefit of Catholic Ireland. In the 1970s liberalism, secularism and scepticism about nationalism ascended.

The first historical-revisionist tract was produced by a Jesuit priest named Fr Francis Shaw. His scepticism about 1916 was so overt that it was thought best to delay publication for six years as the country was, in 1966, fervidly commemorating Easter Rising anniversaries. Fr Shaw’s revisionism seems mild by the yardstick of today – he blamed 1916 for the division of Ireland, the Civil War and the fact that little or no commemoration was possible of those who gave their lives in World War I.

Eunan O’Halpin and Guy Beiner take us through the various commemorations in Irish life in their essay ‘Remembering and Forgetting’ as a final input to the exhaustive and very stimulating ‘Cambridge Social History of Modern Ireland’. What this book reminds you of is the timely and regular nature through which historians not only review earlier conclusions but also attempt to put a new narrative account on what has previously been thought of as undisputed territory. it is noteworthy that one of the best-selling books on the 1916 centenary celebrations was a book about how children were treated though the week-long rebellion.

The editors of the Cambridge Social History, Mary Daly, Professor Emeritus of Modern History at UCD, and Eugenio Biagini, Professor of Modern and Contemporary History at the University of Cambridge, are quick to point out that social history is not just history with the ‘politics’ left out. That said, they are robustly critical of an over-emphasis on political, constitutional, and institutional histories of Ireland. “Our emphasis is on economic and social change, our focus on people and cultures, instead of institutions and political ideologies”, they assert in their introduction.

The book suggests a purposeful placing of Irish history in the context of wider European and global events. This is challenging stuff but with 40 distinct contributors cover ground of interest to both academic and general readers. The wide-ranging topics include previously taboo subject matter like sex and class in Ireland. Thankfully, as historian Joe Lee acknowledged in his Irish Times review, this is not a textbook. More than half the contributors are based outside of Ireland, which again shows a purposeful focus on diversity of thought by the editors. 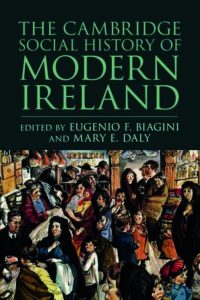 Lee has said of this book that the historian’s delight is a reviewer’s nightmare. The book is not a rainy-day read. One of the great tragedies of recent Irish scholarship is the number of posts in economic and social history that have either fallen vacant or simply just not been continued. It is to be hoped that Irish universities and corporate philanthropy will re-discover the benefits of social and economic history and invest in it. My own view is that local history, as well as social and economic history, deserves investment to counterbalance the overarching political narrative.

Amongst the essays included here is one by Terence Dooley, Professor of Modern History at Maynooth University, on the fate of the Big House, the preserve of the ascendancy class and a symbol of an Ireland that is now essentially gone. Dooley deals both with the social destruction of that class but also the physical destruction of its physical heritage. This still makes for sad reading, in particular, when one looks at the Department of Finance’s memorandum in 1929, declining to take Russborough House in Wicklow, one of Ireland’s greatest houses, into state ownership because it was only of interest to “connoisseurs of architecture” and had never been associated “with any outstanding events or personalities in Irish history”. Despite the obvious neurosis that afflicted the early state with regard to the Big House there should surely be now an argument for a much more comprehensive policy to preserve heritage properties of every description, if only to assuage tourism’s endless search for new venues and more enchanted and more promotable ways.

Henry Patterson, Emeritus Professor of Irish Politics at Ulster University, takes up the challenge of Irish working class experience and why, despite the best efforts, this did not translate into support for the Irish Labour party. He quotes UCD economist Cormac O’Gráda as acknowledging that by 1939 Fianna Fáil had become the party of the working class. Even the 1970s were never socialist. Moreover, unsurprisingly the recent displacement of the Labour party has been at the hands of a resurgent Sinn Féin which is reaping an electoral harvest and an indelible presence in working-class areas, from peace in our time.

Patterson (‘The Irish Working Class and the Role of the State, 1850-2016) acknowledges why working-class politics made so small an impression on Irish life, pointing to the obvious conservatism and anti-communism of the Catholic Church and the fact that James Connolly threw in his lot with nationalism as a progressive force in Irish life. The other reason that class consciousness never took hold in Ireland is probably the existence of the Big House and the ascendancy class. The fact that the ruling class in Irish society were not drawn from the majority Catholic population meant that for several hundred years radicals had no class enemy to tilt at but the ascendancy.

Jennifer Todd, Professor of Politics at UCD, and Joseph Ruane, Emeritus Professor of Sociology at UCC, make a timely point (‘Elite Formation, the Professions, Industry and the Middle Class’) as to why socialism has not advanced in Irish life, when they state that from the 1960s onwards the middle class expanded greatly: “Internal growth and recruitment from the classes above and below has made the middle class the single largest class, more layered than in the past, spread across all sectors of the economy, and culturally hegemonic”. This explains the discomfiture of the left in the modern age but also the challenge facing bigger parties than those on the left in Ireland. The presence cheek-by-jowl of a new cosmopolitan elite and the super-rich are a cause of unease to many in the middle class who cannot obtain either super-rich status or the global mobility and tremendously high salaries of the cosmopolitan elite.

It may come as a surprise to many that the Irish famine of 1740 killed a much higher proportion of the population than its successor of the 1840s. A prolonged period of very cold weather both in Ireland and the continent led to the loss of 16% of the population. Relief and welfare measures were clearly inadequate to the task. The fact that the famine of the 1840s was little commemorated or memorialised in the obvious year of 1947 is testimony to the long shadow over Irish life of famines and hunger.

Catholicism has exercised an almost determining influence over Irish life in the survey period being looked at in this volume. The chapter written by Colin Barr, Senior Lecturer in Modern British, Irish, and British Imperial History at the University of Aberdeen, and Daithi O’Corráin, Lecturer in Modern Irish History, St Patrick’s College, DCU (‘Catholic Ireland, 1740- 2016’) does well in identifying this influence as being almost entirely attributable to one man – Archbishop Paul Cullen, who took over the Irish church in the aftermath of the famine, and ruthlessly went about establishing Rome’s hegemony over the Irish Church. They rightly attribute the genesis of Irish piety to the Cullen influence rather than, as is sometimes said, to the penal laws. They describe Cullen’s influence as revolutionary and primarily responsible for the excess of devotionalism through the spread of novenas, pilgrimages, sacred heart worship, and the regular invocation of the holy rosary.

The authors pinpoint the 1908 decision of the hierarchy not to have a faculty devoted to theology at the new National University of Ireland as explaining why there has been a distinct absence of philosophical reasoning in the public discourse of Irish Catholicism. It may be for this reason also that Church power collapsed so easily in the period after the 1960s. The general anti-intellectualism of Irish Catholicsm, as well the cognate anti-intellectualism of Irish life, is rarely pinpointed as a real danger to progress for Church and State.

While the Cambridge Social History of Modern Ireland is a treasury of new material, it continues to be a source of great perplexity to me why certain powerful organisations in Irish life are substantially under-analysed by professional historians. These include, at least, the Irish Farmers Association (IFA ) and the Gaelic Athletic Association (GAA). The IFA maintains a huge control and influence over government policy on farm incomes as well as an influence over farmers’ lives. While the IFA can be dismissed as the representative body of a sectional interest this cannot be said of the GAA. Hopefully future social historians will put the GAA under the microscope . There are few organisations that have had such a profound impact on Irish life. A follow up to this book should contain at least a chapter on these uniquely Irish icons.