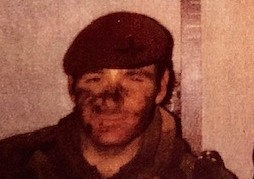 Cleary was a cruel, cynical and clinical killer. He shot Patrick Doherty in the buttock on Bloody Sunday while he was on the ground crawling away from him. The bullet tore up his spine. As Doherty lay crying out in pain, his life draining away from him, Barney McGuigan, an exceptionally brave and humane man, stepped forward with a white handkerchief looking to help Doherty. Cleary dropped to one knee, aimed his rifle and shot McGuigan in the head.

A UK injunction prohibiting the naming of Cleary does not apply in the Republic of Ireland.

The Cathaoirleach of the Dáil had no difficulty with Deputy Tóibín’s contribution. 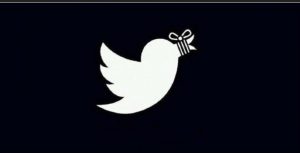 Village magazine named Cleary last year in a series of articles about the Ballymurphy massacre and Bloody Sunday. Twitter suspended our account after a tweet we issued named the soldier. Other accounts were suspended too, including one belonging to the brother of one of those murdered on Bloody Sunday. In a move that is the very definition of perversity, the PSNI are threatening to prosecute him. One can imagine the international outcry that will ensue if the force pursues a prosecution. The Irish contingent in the US Congress will be incandescent. There will be an anger that will unify Dáil Éireann as one if they dare proceed. 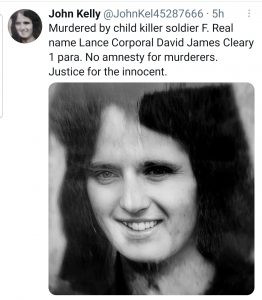 The fact that Cleary has been named by Deputy Tóibín under Dáil privilege has been tweeted and retweeted by a number of people living in the Republic of Ireland. Cleary’s name is now permanently available on the website of the Oireachtas. It will be interesting to see how Twitter responds this time around.

A TikToc with a recent photo of the former 1 Para lance corporal is in circulation.

Yet another recent colour photograph has been transmitted on Twitter (the publication of this picture did not lead to a suspension of the relevant, presumably as it went under the Twitter radar.)

Deputy Tóibín’s contribution was made as part of a question he put to the Taoiseach. Micheál Martin had no difficulty with the fact Cleary was named.

Deputy Tóibín’s question was as follows:

Ten days ago the Taoiseach laid a wreath at the Bloody Sunday Memorial in Derry. At the time and since then the Taoiseach has indicated the families of those who were lost, who were murdered, on Bloody Sunday need to find justice. We are looking at the likelihood that there is going to be an amnesty. If there is an amnesty in the North of Ireland, it means there is no rule of law and that the perpetrators will get away with murder. 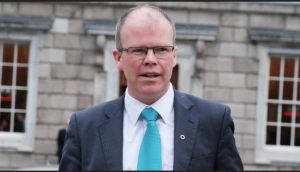 I attended the 50th anniversary of the Ballymurphy massacre, and speaker after speaker got up on the trailer that day and said the British Government quite simply wants to get away with murder. That is what is happening here.

Over recent debates in which I have participated, I have made an effort to name every single victim of the Bloody Sunday massacre, the Ballymurphy massacre, the Springhill massacre, the murders that were researched in Operation Greenwich and those today in the Ombudsman’s report. Is it not shocking that we know the names of the people who lost their lives, the people who were murdered, but we do not know the names of the people who perpetrated those murders. Most people, for example, would not know Lance Corporal David James Cleary, better known as Soldier F, who is accused of murdering civilians on Bloody Sunday. Most people would not know the alphabet of British Army perpetrators of murder. We need to ensure people know their names. The Taoiseach has recounted what has happened, but I am asking him what steps will he take to ensure those names are known throughout the country for the murders they have committed. 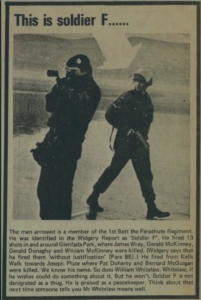 The Taoiseach responded as follows: 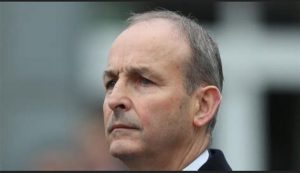 In the first instance, I have told the Deputy what we are doing. I do not agree with the amnesty at all and I do not take it as a likelihood. The Irish Government has entered into discussions with the British Government and all of the parties in Northern Ireland in respect of the proposals that emanated from the British Government last year. We have made it very clear we do not accept any unilateral actions in respect of legacy that would represent a breach of the Good Friday Agreement and subsequent agreements. 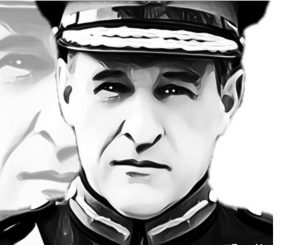 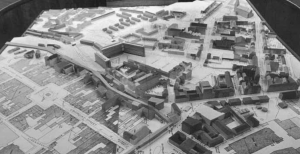