Both NAMA (The National Asset Management Agency) and Local Authorities have been criticised for ‘land-hoarding’, ‘sitting’ on sites particularly in Dublin and the Greater Dublin Area (GDA) and not developing land that could be used to address the current housing crisis. Despite the amount of land under their control, Minister Eoghan Murphy has recently asked the Attorney General if powers to effect Compulsory Purchase Orders (CPOs) could be upgraded to encourage those with vacant homes and land to sell quickly. The enhanced powers are part of a new strategy on vacant homes and land due to be announced by Government in June (1).

The Minister’s strategy is puzzling given that the State itself has been using less than one percent of its current zoned development land-banks for housing every year.

A year ago the Department of Housing pub- lished ‘the Rebuilding Ireland Land Availability Survey’ which included details of State-owned land. This report confirmed that Local Authorities own zoned residential land with capacity for 37,950 dwellings (on 1,211 hectares) and that this represented just a portion of State-owned land (2).

When it comes to the NAMA, the picture is similar. It currently controls the loans on enough development land to build 65,399 dwellings (1,691 hectares); in County Dublin NAMA controls land with the potential for 43,075 dwellings. (3)

Nationwide the State controls development land with the capacity for 114,123 dwellings (3,008 hectares) – more than 17% of all zoned residential land by area and more than one quarter of the potential housing capacity in the country.

In addition, according to the Irish Times, at least 334 sites or buildings controlled by the Government are lying idle across the State, some of them for more than 30 years. The worst offender is the Health Service Executive with 137 unused buildings or sites. The other 197 sites are shared between nine Government departments, and include Garda stations, courthouses, military barracks and customs posts.

Almost half of all County Dublin residential development land is State-controlled and between NAMA and Local Authorities there is the capacity for 71,425 dwellings (1,212 hectares). These figures exclude holdings owned by the Housing Agency and other State and Semi-state bodies. In Dublin City three out of every four vacant residential zoned sites are either owned by Dublin City Council or NAMA debtors.

3. NAMA Residential Delivery Updates (December 2017): https://www.nama.ie/development-funding/nama-residential-delivery-updates/. There is a reduction of 238 hectares from end-2017. There are number of factors for the reduction, including: the land has been built on, The land has been sold, the land has been re-zoned, the debtor has repaid or refinanced their debts and their loans are no longer in NAMA. In 2017, 2,503 were completed by debtors/ receivers funded by NAMA. 7,200 since counting began in 2014. 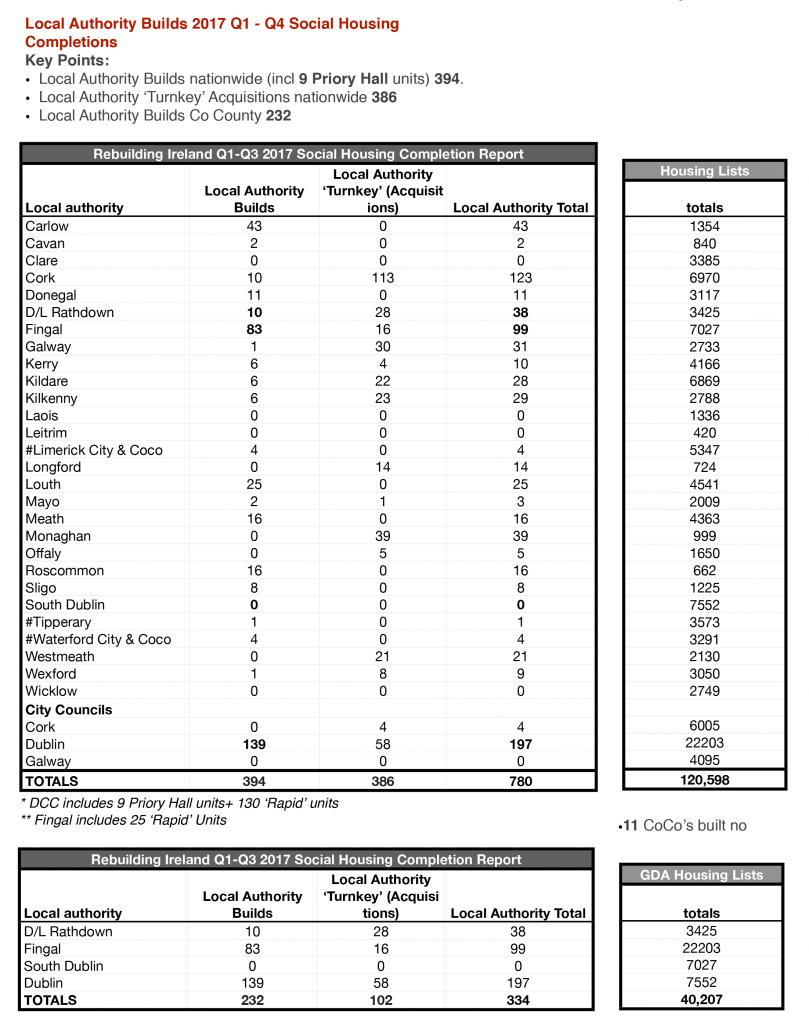 Official targets for 2018 social-housing builds and acquisitions have been increased by just 11% on last year’s levels(6) (expect less than 450 Local Authority builds this year nationwide. By the end of 2018 one in three tenancies will be in receipt of some form of State rent assistance, making up almost 1950m. At current rates of increase by 2019 this annual spend on rent assistance will increase to over 11.1bn per year.

In addition to zoned residential development land, the State owns massive landbanks, significant parts of which may be suitable to be re-zoned to residential use in the longer term. Even if a large percentage of the land controlled and owned by the State is not suitable for development, there is still more than enough to build 10,000 social homes per year, a recommendation of the All Party Oireachtas Committee on Housing and Homelessness in 2016 (7).

7.“Report of the Committee on Housing and Homelessness” June 2016, Houses of the Oireachtas; http://www.oireachtas.ie/parliament/ media/committees/32housingandhomeless ness/Final-Report-.pdf

The final word goes to Minister Eoghan Murphy: “As I’ve said before, there’s going to be a carrot and stick approach to this, which will be finalised in the coming month or so. People with property interests need to be made aware that we are moving quickly on this”. I wonder will the State consider building on land banks it currently controls or owns – any time soon.