This piece could be, and has been, written before the election to the Northern Assembly – because everybody knew, bar some details, what the result would be.

The real business starts, though, as the DUP and Sinn Féin must work out a new agreement.

Both have invested too much of their political goodwill for too long in the devolution project. There is no going back to pre-lapsarian stances for either party. Each will, of course, eye-ball the other in negotiation, and threaten to walk way. The logic of events, the logic of history, will force them together, however. Incipient collaboration between the UUP and SDLP – led by the declaration of UUP leader Mike Nesbitt that he will transfer his second vote to the nationalist party, is unlikely to make any difference any time soon. It’s a sadly unexplored vista, tantalising glimpses of which were provided by the television leaders’ debate in which the DUP and Sinn Féin were outclassed by leaders of the smaller parties.

Importantly, the two parties are financially dependent on the Assembly and Executive. Between them, both parties employ several hundred people deriving directly from the Assembly’s existence. In total Stormont employs 16 special advisers at salaries of up to €100,000, compared with 11 in the Scottish Government and eight in the Welsh Government, but there are far more advisors paid to work in constituencies. A long-term suspension of devolution would deprive both parties of resources. The DUP employs a sizeable layer of young professionals: these might lose interest in a decaying politics. Sinn Féin has to be aware of the fate of the SDLP. In the 1980s, without devolution, the SDLP’s bright young things drifted away. Meanwhile, Sinn Féin’s threadbare organisers were driving clapped-out cars but building an organisation on the ground.

Despite the wishes of the two parties, though, making a deal is not simple. Sinn Féin will have problems doing so.

Arlene Foster is fatally weakened as DUP leader. It is a question of when, rather than if, she will resign. Multifarious revelations are emerging about the Renewable Heat Incentive scandal. It cannot be known what the findings of the Public Inquiry established by Finance Minister Máirtín Ó Muilleoir will be. For Sinn Féin to go into the Executive before the findings were public would be giving hostages to fortune.

That is so particularly because Sinn Féin underestimated the level of anger over the Renewable Heat Initiative among their own voters – and the widespread attitude in the Nationalist community that the party had allowed the DUP to run the Executive. That is why it has run a strong anti-DUP campaign.
In a personal letter to voters in Mid-Ulster, Martin McGuinness wrote:
“The DUP never embraced equality, mutual respect and all-Ireland approaches. They exhibited crude bigotry towards the Irish language community and their negative attitude to the Irish identity and culture has been accompanied by disrespect towards ethnic minorities, the LGB&T community and victims of British state violence”.

As recently as November, Martin McGuinness jointly wrote a piece with Foster: “Our two parties – along with Claire Sugden as Justice Minister – are now in an Executive facing in the same direction. We made promises to voters that we will keep – taking on the heavy responsibilities that come with elected office, governing in their best interests, tackling head-on the tough decisions. Others decided to duck the challenges and retreat to the Opposition benches. That is a matter for them. We are getting on with the work”.

This counts as evidence of onetime goodwill. 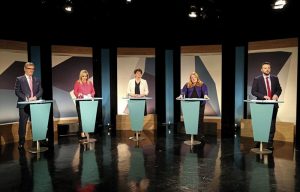 The DUP too faces difficulties in coming to an agreement with Sinn Féin. Michelle O’Neill is an untested leader. She does not have the authority of McGuinness, to persuade the base of any deal. She performed, for example, hesitatingly in the leaders’ television debate.

Once plentiful, outside assistance to facilitate a deal is now meagre. The British government is preoccupied with Brexit. In the South, Enda Kenny is on his way out with no clear successor, and the Government is unstable. As to the US, the chaotic Trump administration has resolved to help its allies less.

The emergence of a new government will take time, and it is unclear if Sinn Féin will accept Foster as First Minister at all. According to legislation, if there is no agreement within three weeks of an election, the Secretary of State must dissolve the Assembly. It is hard to see the parties coming to agreement in that period.