It may not be a huge amount, but one would certainly notice if €122 a year was thrown away on guff. The Sun has recently announced that it will bring in a paywall of £2 per week for access to its online content, starting on the 1st of August. With the Irish Times and the Irish Independent now planning to introduce (or re-introduce) online subscriptions, and 2013 mooted as ‘the year of the paywall’, bringing in subscriptions will not automatically save ‘quality journalism’ – what’s behind the wall will always be most important.

The Sun remains Britain’s biggest-selling daily newspaper, with almost 2.5m copies per day in January of this year. It also remains unavailable in many parts of Liverpool, 24 years after its infamous coverage of the Hillsborough disaster, and it was widely criticised in many respects (though not as robustly as some would have hoped) in the Leveson Report.

For those unfamiliar with The Sun’s editorial line, it is unnecessary to turn more than the first page for an indication.

On ‘Page 3’, along with a topless model, is what is known as News in Briefs – a wheeze that includes a verbose, and pretentiously-written, comment on an aspect of current affairs, labelled as a quote from the model herself. The joke, if we can call it that, stems from the fact that The Sun finds it hilarious that a woman valued only for her looks might actually have a worthwhile opinion. ‘Page 3’ has long been criticised as misogynist, and was mentioned in the Leveson Report on the culture, practices, and ethics of the British press. Although Leveson felt it was not the place of the Inquiry to examine such egregious sexism in the industry, the Report did state that the impact of discriminatory and prejudicial representations of women would merit further consideration by any new regulator. 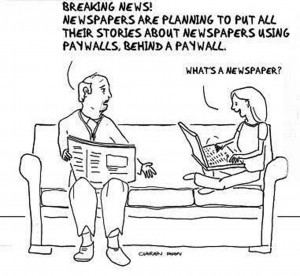 In reality, the new online service, referred to as ‘Sun+’, is founded upon the paper’s new £30m deal for exclusive rights to show highlights of all English Premiership matches in the coming season. This is no secret: the paywall had been rumoured for September, before being brought forward to cover the League’s first round on the 17th of August.

So far, there is simply no consensus on whether this approach is the right way to go for any site. If there were, perhaps two senior editors at the German weekly Der Spiegel would not have been sacked in April, following a row over whether to charge subscriptions on the magazine’s site. There are, nevertheless, some notable success stories.

The New York Times is an example of what is called a ‘soft’, or ‘porous’ paywall. Essentially, it’s a wall with a few gaps that you can peek through. At present, users without a subscription can read ten articles per month on nytimes.com. After two years of the model, online subscribers now constitute almost 700,000 – impressive, although there have been reports that numbers may now be reaching a plateau, with growth of 6% in the first quarter of 2013 the slowest since launch in 2011. Its success has drawn attention, however, and many are planning their walls. The New Yorker has, for example, been testing the water with a public opinion survey.

The Sun, on the other hand, will be the third and last within Rupert Murdoch’s British newspaper empire to impose a paywall as thick as the skin of Murdoch himself. This ‘hard’ model offers no free samples: users must subscribe from the first article onwards. It is a riskier strategy, and when The Times and Sunday Times brought in the model in 2010, traffic to the sites fell by 90%, as is expected in the industry, from approximately 1m unique users per day, to less than 100,000 according to calculations by the Guardian. A prior online readership of around 750,000 has only now recovered to 393,000, according to the May National Readership Survey (NRS). In the three years of paywall exclusivity, thetimes.co.uk daily online readership has only gradually recovered to a recent monthly readership of 554,000, the lowest of any ‘quality’ newspaper website in the latest National Readership Survey (UK), released at the end of May. For the Sun to make a success of it, the site will need to attract 250,000 subscribers, according to IHS Electronics and Media Analysts, though some estimate it will require even more.

Of course there are many sites that have refused to charge readers. The Guardian online remains free, and the Daily Mail’s free ‘Mail Online’ is now the most widely-viewed news site in the world, with daily unique visitors pushing eight million in January of this year. This success, however, has been driven by the Mail’s single-minded approach of focusing almost entirely on celebrity gossip and aggressive search-engine domination. If that’s what it takes to become the most visited ‘news’ site, then the Guardian faces a wrestle with its famous conscience.

Speaking at a paidContent conference in New York on the 15th of April, Editor-in-Chief Alan Rusbridger said: “We’ve always said we’re open-minded [towards online subscription] but we’re not planning on having one”. Statistically, it’s easy to see why. According to the latest NRS, which looks at print and online readerships, guardian.co.uk has over eight million monthly readers within the UK, which has powered a 192% increase in the Guardian’s overall readers (print and online), while the equivalent statistic for The Times languishes at only 7.9%.

Sheer numbers no longer correlate with commercial viability, necessarily. In the year to April 2012, Guardian News & Media (the paper’s publisher) reported pre-tax losses of almost £76m, and editorial redundancies have been as widespread at the paper as at its competitors. 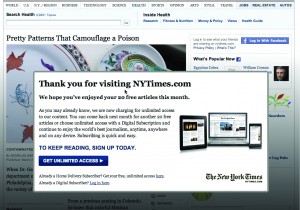 Stephen Rae, Editor of the Irish Independent, has indicated that independent.ie will be erecting a paywall in the near future, while irishtimes.com is planning to introduce charges by the end of the year, according to Managing Director Liam Kavanagh, speaking on the RTÉ ‘Media Show’ in April. Of course, with enthusiasm for irishtimes.com at a seemingly disastrous low (see Frank Schnittger in Village April-May), it might be hard to argue that this is a moment to be seized, particularly recalling the paper’s previous experience with paywalls. However, inaction is not an option – between July and December 2012, the circulations of the Irish Times, the Irish Independent and the Examiner were down by 24-30% on the same period in 2006.

Online subscription can come in all shapes and sizes. Some have argued in favour of a package approach, as has been adopted by the New York Times, which bundles services such as print copies, mobile and tablet apps, and site access, in various combinations. In this model, it is possible print can stay alive even as a loss-making aspect of the business, that keeps the ‘brand’ in the public mind.

There are also some fundamental bumps that have yet to be hammered out. Digital-advertising revenues are a minuscule fraction of print-advertising revenues, as the virtually unlimited supply of advertising space online means prices are kept down. Attracting a new generation of young readers to a news ‘brand’ also conflicts with paywall models – expecting young people to pay upwards of €200 for access to a single news site is unrealistic. The current impasse over how to drag journalism into the digital era is only worsening with time, as the wide range of free news sites, such as broadsheet.ie and the journal.ie, continue to attract a youthful readership. Perhaps a model that brings news to Ireland’s youth, in an engaging way, will not be profit-propelled at all.