The rights of women have improved greatly, but the goal of full equality remains a work in progress. Addressing the gender inequality challenges that remain is more difficult than previously, because fundamental change is required in economic policy-making and planning.

We have to identify ways of incorporating a focus on equality into economic decision-making processes.

Equality budgeting can help to achieve this. This approach has developed out of a growing understanding that fiscal (tax and subsidy) policy can make a significant contribution to narrowing or widening gender gaps in areas such as income, health and education. Fiscal policy can be a powerful tool for improving and equalising the living standards and opportunities of women and men.

Equality budgeting assesses the impact public expenditure and taxation has on certain sectors of society. It identifies who benefits from economic policy measures and who doesn’t. It ensures that equality is integrated as a driving principle in the planning, design, implementation and review of economic policy measures. It increases transparency in budgetary processes and economic decision-making.

We know, for example, that the lack of high-quality, affordable childcare is a major barrier to employment for many women. Therefore, a policy aimed at increasing our investment in publicly-funded childcare and early-years education from the current level of 0.4% GDP annually to the OECD average of 0.7% GDP is likely to make it through an equality budgeting process. However, it’s important to add that political will is also required for policy priorities to receive Cabinet approval.

Adequate public investment in childcare and early-years education has yet to make it through the current system of deciding budgetary priorities. This is because the current system tends to ignore the different socially-determined roles and responsibilities of men and women. It overlooks the different impacts that policies have on men and women as a result of these roles.

The Equality Budgeting Campaign’s report, ‘Incorporating Equality Budgeting into Ireland’s New Budgetary Process’ states that “the objective of equality budgeting lies in ensuring this (type of) information is used to reduce inequalities and to achieve the best equality outcomes for specific disadvantaged groups, but also for society at large”.

Equality budgeting opens up our economic growth strategy to a different kind of scrutiny. This goes beyond ‘value for money’ or ‘cost-benefit analysis’. Both of these perspectives are important for assessing economic efficiency, but they are lacking for assessing impact on economic equality.

Scotland has established an independent budgetary advisory group, the Equality and Budget Advisory Group (EBAG), for this purpose. This is made up of government and civil-society actors, including the Women’s Budget Group, the Equality and Human Rights Commission, the Scottish Government Finance Directorate, and the Office of the Chief Economic Adviser.

The advisory group works with the Scottish Government to: provide advice and support for the mainstreaming of equality in policy with the appropriate allocation of resources; contribute to mapping the pathway between evidence, policy and spend; improve the presentation of equality information in the Scottish budget documents; and contribute to improved commitment to, and awareness, of mainstreaming equality into policy and budget processes.

The Scottish budgetary process involves the publication of a draft budget, which allows for public consultation and debate on the particulars of the budget before it is finalised. This approach is in marked contrast to the Irish budgetary process which involves no public consultation on draft measures and where there is endless ‘kite flying’ in the weeks leading up to the budget announcements.

The Scottish parliament publishes an equality statement alongside the draft budget clearly outlining the equality implications of the budget. The statement is arranged under the key themes of the budget, such as health and wellbeing, culture, external affairs, finance, employment and sustainable growth. The Equality Budgeting Campaign’s report draws on the Scottish experience in setting out the steps required to introduce an Equality Budgeting process in Ireland.

This gain is demonstrably achieved through: quantitative improvements in women’s labour market participation; improvements in the effective use of  investment in human capital; women’s contribution to growth through greater economic independence; women’s contribution as consumers of goods and services; the integration of women into the fiscal system as net contributors to the welfare state; and the establishment of a sustainable system of social reproduction that is essential for economic growth, future labour supply and sustainable public finances. 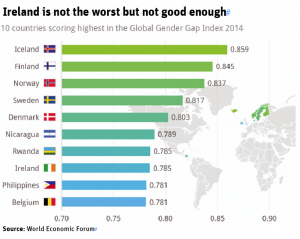 However, while it is important to make an economic case for gender equality, it is also important not to ignore the moral or social dimension to equality. This still transcends as an imperative justification. Gender equality has many non-economic benefits including reductions in child poverty and enhanced personal freedom. Gender equality is about human worth and the type of society we aspire to.

The National Women’s Strategy 2007– 2016 is the key policy document in relation to the advancement of women in Irish society across all facets of the economy and society. The Strategy is structured around 3 themes in the areas of equalising socio-economic opportunities for women; ensuring well-being of women; and engaging women as equal and active citizens. Within these themes there are 20 key objectives and over 200 planned actions, some of which have been implemented over the last nine years.

The current Strategy comes to an end next year and a consultation on a new National Women’s Strategy is due to get underway in 2015. Last year, the mid-term review of the National Women’s Strategy was published and it concluded that the strategy remains relevant to the current economic and social climates. The review notes that the reduction of funding for positive actions and for some other services presents a challenge.

The objectives in the Strategy relating to economic independence include: increasing the participation of women in the labour force; decreasing the gender pay gap; promoting the advancement of women in the labour force; supporting women entrepreneurs; ensuring girls and women achieve their full potential in the education system; ensuring childcare services are optimised to meet the needs of parents and children; ensuring that the care infrastructure supports women’s socio-economic engagement; and reducing the number of women experiencing poverty, in particular lone parents and older women.

The mid-term review states that these objectives remain relevant. It recommends more awareness-raising about education choices and labour market options; the costs and availability of childcare remain an issue; and the labour market continues to be the best route out of poverty.

The mid-term review does mention that proposed actions under the Strategy have been affected by budget cuts. However, it does not highlight the fact that six years into the implementation of the Strategy the participation of women in the labour force remains static; the gender pay gap is rising; the rate of women’s entrepreneurship remains low; childcare costs and availability continue are still a major barrier to employment; and the poverty rates for lone parents have risen over the last number of years.

While the impact of austerity has clearly taken its toll on efforts to promote gender equality, the Strategy itself was weak in a number of ways. The economic ‘theme’ of “equalising socio-economic opportunity for women” did not include any reference to the impact of taxation, public expenditure and the distribution of resources. Nor does the Strategy include quantifiable and measurable targets associated with these or any other objectives.

Its not possible to achieve economic independence for women in the absence of integrating gender-specific perspectives at the design stage of economic policies and economic planning. A commitment to a comprehensive and fully-resourced Equality Budgeting process in the new National Women’s Strategy has the potential to put equality at the core of economic decision-making. It has the potential to address the causes of economic inequality and not just the symptoms. This approach should be coupled with quantifiable and measurable targets relating to employment, pay and poverty reduction.

Women’s economic participation and empowerment are fundamental to strengthening women’s rights and enabling women to have control over their lives and exert influence in society. Ultimately, this is central to creating a just and equal Irish society. •