A real plan for reducing inequality is needed as we approach Budget 2016 and this is what Anthony Atkinson offers us in ‘Inequality: What Can Be Done’.
Inequality is not inevitable, he states, and the process of reversing the trend of growing inequality requires political engagement and concrete steps. This conclusion is based on decades of analysis of inequality by Atkinson. It is rooted in his ambition to map out the policy measures to start the process of reversing the trend towards growing inequality and of narrowing the income gap. This is not utopian as much of what is proposed already exists in a number of Northern European countries.
Atkinson defines the problem as not just being about the rich getting richer, but also that we are failing to tackle poverty, while the economy continues to change rapidly, and the majority are left behind. Rising top incomes and stagnant low incomes are partly caused by long-running trends such as globalisation and technological change. These trends and their consequences can be altered by policy, Atkinson argues.
Governments play an important role in shaping the direction of technological change. The state, he says, should be conscious of its role in the innovation process and take account of its effects on income distribution. The development of autonomous driverless vehicles, for example, is currently being undertaken by a number of global tech companies including Apple and Google. Much of the research behind this innovation is being sponsored by the US government. This development may eliminate millions of jobs for less-skilled workers. However, if workers had a stronger voice, state-sponsored research could focus on creating factory technologies that complement the skills of workers in the manufacturing sector.
Similarly, trends in globalisation, Atkinson argues, are not inevitable but the result of decisions that are taken. Talks on the Transatlantic Trade Investment Partnership, for example, are on-going behind closed doors and involve governments and corporations. The voices of consumers and workers are largely absent from these talks, but the impact of decisions made will have a direct impact on the lives of millions of workers and consumers. Such decisions are too important to be dominated by the interests of corporations and their shareholders.
The increasing pace of technological change is driving up demand for more skilled workers. However, the education system is not producing enough people with the required skills in the necessary numbers to keep up with demand. This is creating wage inflation at the top. The obvious answer is to increase investment in human capital, education and training. But this won’t address income inequality on its own.
Atkinson defines income as including earnings, income from capital (investments such as pensions) and welfare; the sum of which is reduced by direct taxation.
This means there are many forces in operation with regard to increasing and decreasing the income gap. These include the welfare state and taxation; jobs and pay; and the ownership and transmission of wealth. These three areas form the basis of fifteen proposals from Atkinson to start the process of reducing income inequality.
In the area of welfare and taxation, Atkinson proposes more taxation and more public expenditure. He points to the post-World War II era and the impact of high marginal rates of taxation and of the creation of the welfare state, in narrowing the income gap.
In contrast, OECD research highlights that from the mid-1990s the reduced redistributive capacity of tax-benefit systems was sometimes the main source of widening household-income gaps.
Atkinson draws on earlier research (see Chart 1) to show how the top marginal income tax rates have reduced since 1960, and the corresponding increasing income share of the top 1%. In Ireland, the marginal rate of tax has been reduced by approximately 25% over this period and we are the third highest in terms of the increasing share of income going to the top 1%. 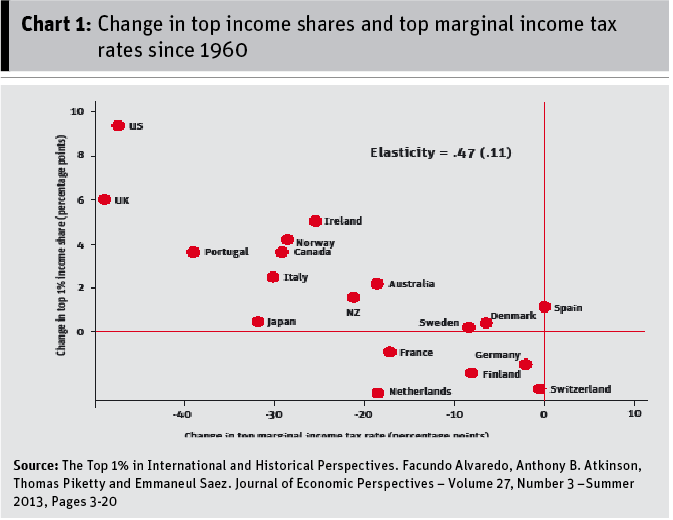 Proposals in this area include: increasing the marginal rate of taxation, with a top rate of 65%; increasing inheritance tax; introducing property tax (where it doesn’t exist); substantially increasing child benefit and taxing it as income; increasing social insurance or introducing a basic income; and increasing Official Development Assistance.
When considering Atkinson’s proposals in an Irish context it is important to understand Ireland’s fiscal policy as a low-tax and low-spend economy.
Chart 2 illustrates the extent to which we differ from other EU countries in this regard. 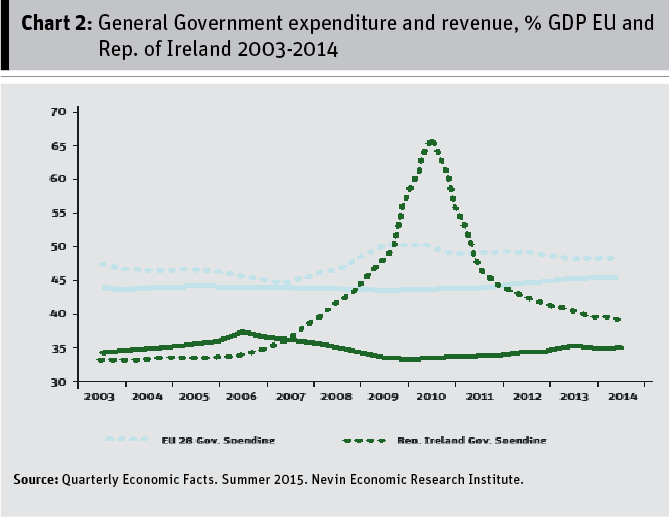 We know that Budget 2016 will include tax cuts in the region of €750m. This is likely to include reductions in the Universal Social Charge and increasing the threshold before inheritance tax is applied. The top marginal rate of tax was reduced from 41% to 40% in Budget 2015.
We are moving in the opposite direction from that recommended in Atkinson’s proposals for reducing income inequality in terms of taxation and spending. This is a political choice and not an economic necessity. The Nevin Economic Research Institute states in its latest ‘Quarterly Economic Observer’ that “sustainable fiscal policy is as consistent with high levels of revenue and spending as it is with low levels of revenue and spending…”.
As to jobs and pay, Atkinson proposes: the adoption of an explicit target for reducing unemployment; offering guaranteed public employment; developing a national pay policy with the minimum wage set at the Living Wage; and active policy-making in the area of technological change. He recommends that the State becomes an employer of last resort, in the same way that it is the ‘lender of last resort’.
In Ireland, the unemployment rate currently stands at 9.6%, with a target to reduce this to 6.9% by 2020. While the unemployment statistics are moving in the right direction, Ireland still has one of the highest rates of jobless households in the EU, with almost one quarter of household (23%) falling under this category.
The quality of the jobs is just as important. Policy needs to reverse the growth in precarious work, including zero-hour contracts and workers being forced to register themselves as being self-employed to get work, when in fact they should be employees.
According to the NESC Report, ‘Jobless Households: An Exploration of the Issues (2015)’[, the emphasis on participation and activation must extend beyond those on the Live Register and those classified as long-term unemployed. Improved services are required in the areas of adult literacy, child development, family supports, addiction, disability, housing, education and training, public employment and community employment. All of this requires significant public investment.
In the area of pay: Ireland’s recently increased minimum wage of €9.15 falls far short of the Living Wage of €11.50. However, the establishment of a Low Pay Commission is an important institutional development.  Closing the income gap requires measures to reverse the trend of top earners taking the growing portion of the income pie. Over a 25 year period (1984 – 2009) the top 1% share of income has increased from 6 .5% to 10.5%, while the share of the top 10% has increased from 31.5% to 36%.
In the area of ownership and transmission of wealth, Atkinson’s proposals include: creating a sovereign wealth fund to build up the state’s net worth – the establishment of the Irish Strategic Investment Fund is a modest start in this regard; introducing a distributional dimension into competition policy e.g. taking account of the impact of mergers and acquisitions on employment – Aer Lingus is a case in point; and putting a legal framework in place that allows trade unions to represent workers on equal terms in corporate decision-making.
In general, the relentless drive for profit maximisation is a key feature of the ‘shareholder model’, which is the dominant corporate structure. There is a need for more democracy in public and private enterprises.
A shift in decision-making power is needed from a small minority of corporate shareholders, whose focus tends to be on short-term profit maximisation, to a larger majority of public and private stakeholders, who are more likely to take a balanced and longer-term view of maintaining a viable business while also taking other factors, such as employment and the environment into consideration.
Taxation is the key mechanism through which wealth and income is redistributed. Inheritance tax, capital gains tax and taxing income from capital/wealth in the same way as earned income all have a role to play. The introduction of a minimum effective tax rate for wealthy individuals and large corporations in Budget 2016 would be a step in the right direction towards narrowing the income gap and improving the redistributional effectiveness of the tax system.
Anthony Atkinson’s book clearly demonstrates what can be done to reduce income inequality. The Irish budget plays a key role in creating the conditions for reducing or increasing income inequality. The choices made will indicate the importance the government gives to equality and, so far, it is not looking good when compared to Atkinson’s proposals.

Taxation
• Return to a more progressive rate structure for the income tax, with increasing marginal rates of tax up to a top rate of 65 per cent, accompanied by a broadening of the tax base.
• Introduce into personal income tax an Earned Income Discount, limited to the first tranche of earnings.
• Change Inheritance Tax from [in the UK] a tax on giving to a tax on receiving, with a progressive lifetime capital receipts tax.
• Council Tax [in the UK] to be replaced by a proportional property tax based on up-to-date property assessments.

Spending
• Child benefit should be paid for all children at a substantially higher rate, and taxed as income.
• A participation (citizen’s) income should be introduced, complementing existing social protection, with the prospect of an EU-wide child basic income.
• OR Restore social insurance to reduce dependence on means-tested benefits.
• Rich countries should raise their target for Official Development Assistance to 1 per cent of Gross National Income.

Employment and Wages
• The government should adopt an explicit target for reducing unemployment, and offer guaranteed public employment.
• There should be a national pay policy: with the minimum wage set at the Living Wage, and a code of practice for pay above the minimum.
• The direction of technological change should be an explicit concern of policy-makers, encouraging innovation in a form that increases the employability of workers, emphasising the human dimension of service provision.

Capital and Wealth
• (a) Introduce a distributional dimension into competition policy,
(b) ensure a legal framework that allows trade unions to represent workers on level terms, and
(c) establish a Social and Economic Council.
• The government should offer via national savings bonds a guaranteed positive real rate of interest on savings, with a maximum holding per person.
• There should be a capital endowment (minimum inheritance) paid to all at adulthood.
• Creation of a public Investment Authority, operating a sovereign wealth fund to build up the state net worth. •