There is a good reason to regard the labour historian C Desmond Greaves (1913-1988) as the intellectual progenitor of the 1960s Northern Ireland Civil Rights Movement, for it was he who pioneered the idea of a civil rights campaign as the way to undermine Ulster Unionist majoritarianism.

Greaves is best known in Ireland for his biographies of James Connolly, Liam Mellows and Sean O’Casey. Because his political activity on Ireland took place in British Labour circles, it is not so well known here. Perhaps also because he was a communist party (CP) member, as in the days of the Cold War people were reluctant to credit communists with any progressive development. 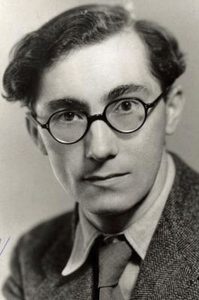 Desmond Greaves joined the British CP in 1934 when a student at Liverpool University at a time when, with fascism advancing on the continent, many of Britain’s young intelligentsia moved to the left.  He was always more interested in questions of imperialism and national independence than of socialism. He held the view that leftwingers should champion democratic issues and if possible give a lead on them. This he saw the socialist James Connolly as doing when he allied with the radical democrats of the IRB in the Easter Rising to establish an independent Irish State. He identified early on with Ireland, where he had family roots, and devoted most of his political life to trying to undo Partition.

Logically, there were only two ways this could be done. One was the IRA way of physical force. This was undesirable in principle because of the violence and division it would cause, but it was also impractical because the British army, with NATO behind it, could never be defeated militarily. The other way was to create political conditions in Northern Ireland whereby over time Unionists/Protestants would rediscover the political implications of the common Irishness they share with their Nationalist/Catholic fellow countrymen.

Hence civil rights: to establish equality of treatment and parity of esteem between the two Northern communities. If the rational basis of the Unionism of many Unionists was to be top-dog over Catholics, getting rid of top-doggery, which only a successful campaign for civil rights and equality could do, would lay the basis for a gradual coming-together, even if it took two or three generations.

The post-War British Labour Government was wholly behind Ulster Unionism because of its backing of Britain’s efforts in World War II.  This was shown by Labour’s passing the 1949 Ireland Act, which provided that there could be no change in the constitutional position of the North without the consent of the Stormont Parliament. Twenty years later, when the Civil Rights Movement got off the ground, Ulster Unionism was so discredited in British Labour circles that there was substantial backbench opinion pressing Harold Wilson’s Government to tackle anti-Catholic discrimination in the North.

This change was largely due to the work of Greaves and the Connolly Association, which campaigned in British Labour and Liberal circles from 1955 onwards to expose the woeful civil liberties situation under the majority Unionist regime at Stormont. Founded in 1938, the Connolly Association is the oldest political organisation of the Irish community in Britain. It is still active there. Greaves edited its monthly journal, the Irish Democrat, from 1951 until his death in 1988.

From 1958 until 1961 I was active in the Association while studying and working in London. I was its full-time organiser for a while. Its main campaign at the time was to try to get Labour MPs to demand the release of the couple of hundred Republicans who were interned without charge or trial, some for years on end, in Belfast’s Crumlin Road Prison under the Stormont regime’s Special Powers Act. This was following the IRA’s 1950s Border campaign.

The British Government hid behind the parliamentary convention that MPs could not raise anything in the House of Commons relating to powers devolved to Stormont, which included justice and policing.  This was a happy way of ensuring that sleeping dogs lay undisturbed. Greaves discovered that a number of the Belfast internees were members of British trade unions operating in Ireland.  We were invited as speakers to trade union branches in London, Manchester, Glasgow and other cities to tell their astonished members how some of their fellow trade unionists were being imprisoned for years without charge or trial in a part of the UK about which they knew nothing.  By 1961 over half the Parliamentary Labour Party had signed a series of telegrams to Unionist Premier Lord Brookeborough calling for the release of the internees, which duly happened.

This anti-Unionist campaign in Britain continued during the 1960s. The Connolly Association was affiliated to influential bodies like the National Council for Civil Liberties and the Movement for Colonial Freedom, which helped leverage its message. Greaves established good relations with the old Northern Nationalist Party and in particular Cahir Healy MP. When Patricia and Conn McCluskey set up the Dungannon-based Campaign for Social Justice in 1964 and began detailed documentation of anti-Catholic discrimination, the Association spread its material in British Labour and Trade Union circles. When Gerry Fitt was elected MP for West Belfast in 1966, it was the Association that organised his first public meetings in London.

Greaves had considerable personal influence on those who set up the Northern Ireland Civil Rights Association in 1967.  Two ideological influences went into NICRA’s formation. One was the Republican ‘politicisers’ of the Belfast Wolfe Tone Society, of whom the late Jack Bennett and Fred Heatley were on the original NICRA executive. Greaves used to stay with Bennett, who wrote the influential ‘Claud Gordon’ column in the Sunday Press, when he visited Belfast. The other was the leftwing trade unionists, mostly of Protestant background, of the Belfast Trades Council and the Draughtsmen’s Union in the Belfast shipyard. Betty Sinclair, who was the full-time Trades Council secretary and Noel Harris of the Draughtsmen, were leading NICRA figures whom Greaves knew through the Northern Ireland Communist Party.

In 1968, in face of Unionist resistance to the civil right demands, Greaves wrote to Prime Minister Wilson on behalf of the Connolly Association advocating a Bill of Rights for the North whereby the Westminster Parliament would impose a legislative straitjacket on the subordinate Stormont assembly. This would at once outlaw discriminatory practices, thus guaranteeing civil rights for the Nationalist population, while at the same time permitting, and preferably encouraging, the devolved administration in Belfast to develop closer relations with the South. He saw such a constitutional initiative as opening a way in time to peaceful reunification with Dublin. It prefigured aspects of the Good Friday Agreement of thirty years later.

NICRA adopted the Bill of Rights demand as its policy. Greaves drafted such a Bill in proper parliamentary form and it was proposed on the same day, 12 May 1971,  in the House of Commons by Arthur Latham MP and in the House of Lords  by Lord Fenner Brockway, but was rejected on a Conservative three-line whip.  That year it became the policy of the Trades Union Congress and thus of the entire British trade union movement, but Harold Wilson’s Labour Government had now been replaced by Edward Heath’s Tories and a new hard-line policy reigned.

Greaves advanced the Bill of Rights policy as an alternative to the call for the abolition of the Stormont Parliament and “direct rule” from London. This was first made by the leftist students of the People’s Democracy. It was taken up in 1970 by the newly formed Provisionals. It swept like wildfire through the Parliamentary Labour Party and in due course it was implemented by the Conservative Edward Heath in 1972 – as Greaves put it, “like a cat being driven into a dairy”.

Greaves wrote an account of the civil rights movement and its historical  background in his book ‘The Irish Crisis’, which was published in 1972, with translated editions in German, Italian, Russian and Hungarian.

He was a remarkable man  – certainly the most remarkable I have met in my lifetime. As his literary executor I am currently editing his two-million-word Journal for putting up on the internet. It will contain much of interest to historians.

When in February 1971 the left-wing weekly Tribune advocated  “Shut Down Stormont”, Desmond Greaves wrote presciently in the Irish Democrat: “This is Labour assuming the mantle of imperialism. Imagine the difficulty of getting a united Ireland if the whole administration of the North were to be fused with England. Does Tribune want a new fifty years of bitterness as anti-partition leagues, labour organisations and the IRA direct their energies to getting the direct rule administration removed? Every issue would be automatically transferred from Belfast to London. And a solution might wait years as successive English governments fooled, vacillated and temporised as they are well able to do”.