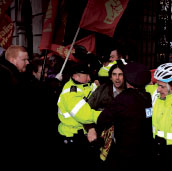 This edition we look at Ireland’s Left. We scrutinise  the Labour Party and find it a little short on radicalism. We also  look at alternative political movements – particularly on the left – and find them somewhat wanting in clarity of purpose.

More generally we also survey [ p80] Ireland’s currently-ubiquitous crisis-driven outpourings of ideas on Renewing the Republic, particularly those on RTE and in the Irish Times and find little inspiration there either (though at least they opened the discussion).

Perhaps Frank Callanan’s thesis [p44] that the country was mesmerised by Bertie Ahern is true.  Far too many Irish people became Economic and practical rather than idealistic or ideological.  We simply don’t have many good ideas. That, even more than the reality of the Economic Depression, posits subduing prospects for the future.

We interview three key Labour Party spokespersons.  They display competence,  shrewdness and an acute awareness of the public interest, if a pronounced weakness on the environment. However, their party has consistently failed to play to public anger and the appetite for change, often fudging and triangulating its policies.

While Éamon Gilmore, perhaps the country’s most talented politician, certainly provides leadership in the Dáil,   there is little sign Labour is leading the country towards a new humane ideology.  Joe Higgins [p6] describes Labour as “fundamentally dishonest about election campaigns”, since it is doomed to coalition and a watering down of the political premises that drive it.

Nevertheless, Niall Crowley’s interview [p22] suggests Gilmore is thoughtful and passionate about society and equality – even equality of outcome – though no doubt the prospects for this ultimately lie with the unimpressive and rightist Fine Gael which seems to have learnt little enough from our values crisis. Labour’s Finance Spokesperson, Joan Burton, gives a sparky interview [p26] and highlights Labour’s thoroughly circumspect attitude to the guarantees recklessly given to Anglo and Irish Nationwide – encapsulating the difference it makes to be driven by the public interest.  Indeed in general Labour probably reflects what most of the country believe in when they apply themselves.  This does not necessarily endear it to this magazine.

In short the Labour Party is neither as radical nor as fresh as it needs to be.

This all opens up a gap, into which hopes to jump a smorgasbord of fringe groups. We assess them in this issue [p47].  Richard Boyd Barrett [p13] offers the compelling analysis that the Left‘s “failings include being too divided and failing to communicate its message in a language that ordinary people can understand”.   But Village prefers Déirdre de Búrca’s perspective that there is a need for a new electoral party and not just a movement or an alliance.  In particular there will be a need to take on Fine Gael which, without a concerted new electoral movement, will take power – presumably  in coalition with a compromised Labour Party – and exercise it in a way that will be almost indistinguishable from the Fianna Fáil (or at best Fianna Fáil/Green) way. Many people believe the country deserves a citizens’ forum.  Village concurs but hopes that any consensus achieved should be used to animate a new political party.

Village believes renewing the republic would best evoke a tri-partite agenda   animated by equality, quality of life/sustainability (which – since the purpose is to pass our resources undiminished to our children – is equality between generations) and transparency. Bunreacht na hÉireann was driven by greater pariochalism and religiosity than is appropriate in a sophisticated and diverse society like Ireland’s today.  The constitution should be overhauled immediately: to reflect these tripartite principles.  Change might be expected to  entail removing the religious and ritualistic elements; guaranteeing equality of outcome (so account is taken of the structural disadvantages in some people’s lives); including commitments incrementally but swiftly to improve the Gini coefficient (which registers equality); promoting the rights of minorities and the vulnerable including women, sexual and ethnic minorities, children and the aged.  A new constitution would need to ensure that the exploitative and criminal are properly investigated no matter how great their resources; guarantee a right to a good and improving environment and that Ireland aims to the highest standards of planning and environmental protection; explicate rights to work, shelter and facilities, rights to equal access to first-class health services and education up to third level; attenuate the current rights of property and provide that land may be cumpulsorily purchased at current-use value and should be rezoned in the public interest by public  authorities rather than under pressure from vested interests.  Political parties should be funded only from the public purse, whistleblowers would be protected, the judiciary and the legal profession subject to scrutiny by independent assessors. We would also like to see government at a level so local (‘parish’ or ‘Community’) that elected representatives represent and are responsible to their own most immediate communities.  That tier of government should be supplemented by powerful directly-elected mayors in urban areas and a new level, of regional government. Elected members should take decisions in concert with cross-sectoral elected-stakeholder roundtables i.e. elected members’ decisions should be informed by the views of businesspeople, community activists, environmentalists, trades unions etc, as well as ther usual bureaucrats.  Balanced roundtables conduce to sustainable development and would preclude the  excesses of  régimes like the Dublin Docklands Authority and the zoning-profligate current local authorities. This preclusion would be reinforced by strict legal obligations on Community and regional authorities to implement a planning hierarchy at the apex of which would be national spatial strategy.

These precepts emanating from a new constitution could drive a comprehensive vision of society, implemented in multifarious ways. Other issues like Dáil expenses, an electoral list system, Seanad abolition and the length of a Presidency relate to the efficacy rather than purpose of the system. In the context of a new constitution they are of rather less concern to us.

The main opposition parties offer an agenda for change.  It is unlikely their agenda will transform society in the way public contempt for politicians would suggest is possible. It is time for a new departure.