The O’Connell Street area is of major architectural, historical, cultural, artistic and social importance, nationally. It constitutes a distinct quarter of the city that was formally planned, laid out and developed between the 1740s and the early 1800s. This architecturally distinguished area has a simple but elegant plan – terraced buildings lining the streets, usually four-to-five storeys in height, with the lines and rhythm of the facades lending an overall coherence. Occasionally, these terraces are interrupted by a landmark building that confers a special quality or image onto individual streets. In spite of the pressures of time, this area still remains relatively intact over two hundred years later, a testimony to the importance of the area.

The rich architectural character and heritage of the O’Connell Street area is generated not only by the landmark buildings or the more significant protected structures such as the GPO, the Pro-Cathedral, Tyrone House or the Rotunda. The special character is built up by the interaction between these important buildings and the ordinary building stock, as well as the stock of historical and cultural memories and associations attached to these buildings and public spaces.

In recent times Dublin City Council has produced volumes of plans, with limited teeth and characteristically prospective-only application (ie they only apply to future planning applications). The most notable is the architectural conservation area. The City Council stated:

“In order to properly protect and manage this rich legacy, it is essential not to concentrate solely on the preservation and restoration of the landmark buildings, but also on the conservation and the regeneration of the wider historic urban area. The Architectural Conservation Area provides a mechanism to protect and enhance this wider area. It will seek to protect the existing strong local sense of place, while accommodating the changing needs and image ofthe area. It must be stressed that is not intended to prevent development. Instead, it is intended to ensure that development, when it takes place combines positively with the historic fabric and is to a high design standard”.

A new plan for Dublin’s O’Connell Street, which will govern the future use and architectural treatment of its buildings was published by Dublin City Council in 2015.

The scheme gives extra planning powers to protect existing shops of “special significance” and discourages “less appropriate uses” of premises.Permission will not be granted under the scheme for certain types of shops, including amusement arcades, bookmakers, fast-food outlets, mobile-phone shops or “adult entertainment” shops.

Inevitably, in Ireland of the overriding fear of lawyers under the Constitution, the measures will have prospective force only. More precisely a designation of what IS appropriate should be formulated for O’Connell St – something along the lines of “reinforcing the character of the street as the country’s most important civic and historically important boulevard”. Ideally activity on the street should be wholesome and family-friendly. And imaginative. 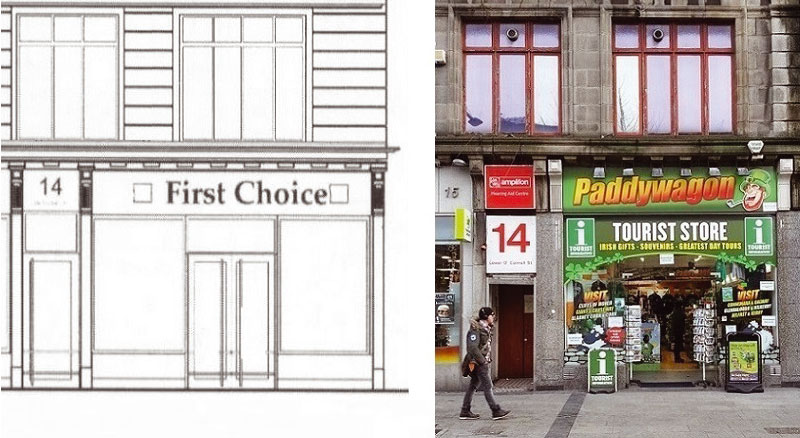 Above-left is Dublin City Council’s proposed improvement for the shopfront at 14 Lower O’Connell Street as published in the O’Connell Street Area Shopfront Design Guidelines (2003), with a current photograph of the shopfront above-right. Rather than improving, it has deteriorated significantly in the thirteen years of ‘operation’ of the guidelines, with complaints to the City Council’s planning enforcement department going unresolved. The condition of this shopfront, which is on a prominent stretch of Lower O’Connell Street opposite Easons and close to the former Clerys landmark, encapsulates the failure of Dublin City Council to secure and maintain the most basic presentation standards on O’Connell Street despite the succession of plans published for improvement of the street since the late 1990s. 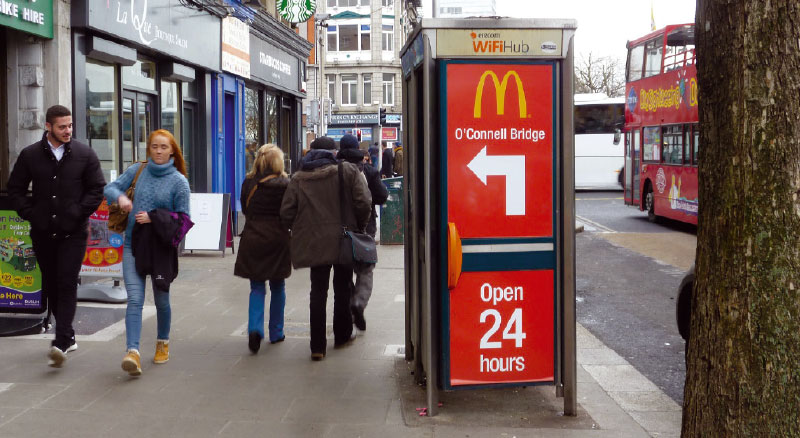 At O’Connell Bridge, Eircom (now Eir) are selling the window space of virtually-disused phone-boxes to advertisers such as fast-food chains. The effect is to reinforce identified problems of excess fast-food use in the area, and despite the strict controls outlined for advertising structures in the ‘Scheme of Special Planning Control’ for the O’Connell Street area. The sticker-glazing advertisements are, in turn, concealing anti-social behaviour inside the phone boxes as well as cluttering the pavement and visually injuring an architecturally and historically sensitive area within the O’Connell Street ACA. 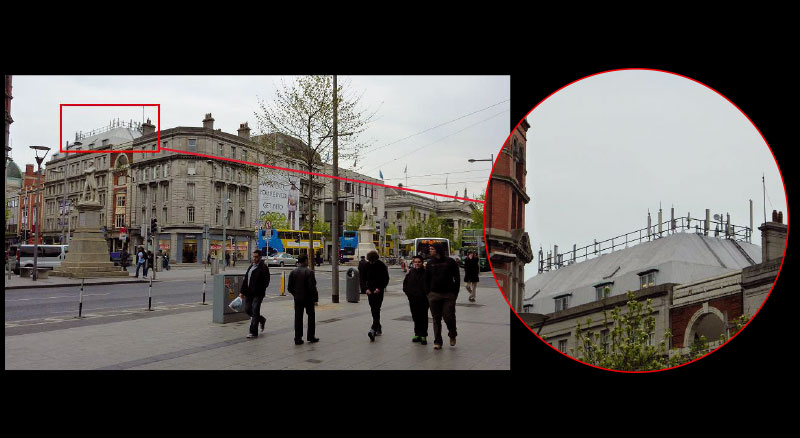 Unsightly telecommunications antennae adorn the Middle Abbey Street roof of the Easons building, Lower O’Connell Street, a protected structure which is seen in the view towards the GPO. A planning search cannot reveal permission for all of these antennae, however it seems Dublin City Council is more interested in pursuing a 90-year-old woman for legal costs following erection of a satellite dish outside her suburban home than ensuring Ireland’s main street is presented to an appropriate high standard and complies with planning laws. 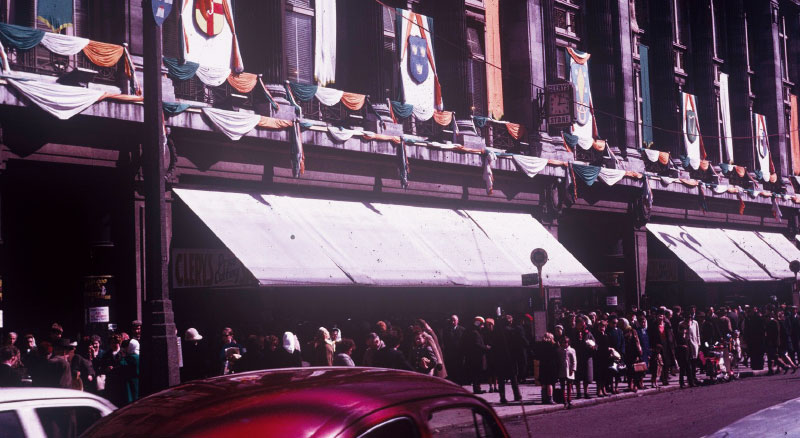 Department stores on the site date from 1853 when Mc Swiney, Delany and Co. opened ‘The New or Palatial Mart’ on the site of the present store though the current building was built in 1922, having been completely destroyed in the 1916 Easter Rising. In 1883, the premises was taken over and renamed by M. J. Clery (d.1896), a native of Bulgaden, Co. Limerick. William Martin Murphy, of 1913 Lockout infamy, was also involved in the business.
Clerys completed a five-year restoration programme in 2004 at a cost of €24 million.Clerys was sold by Boston-based Gordon Brothers to Natrium Ltd last Summer. OCS Operations Ltd, which had been running the shop, was then placed into liquidation, resulting in the precipitous closure of the famous shop.
More than 400 staff, including direct employees of Clerys and those working for concession holders at the store, lost their jobs in a lockout 2015-style. 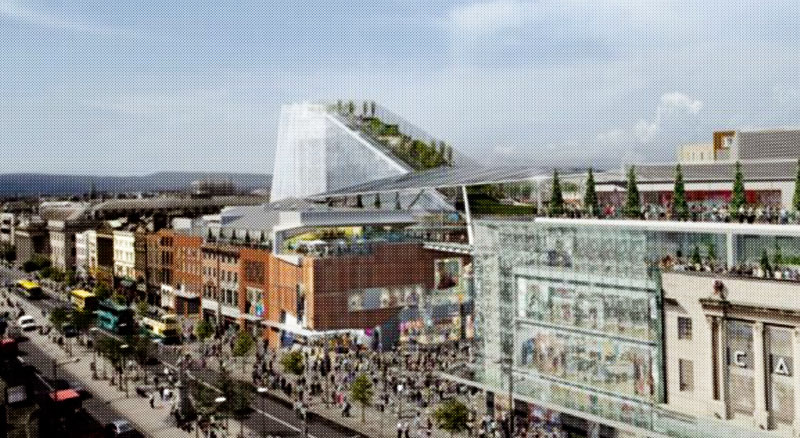 English developer Hammerson recently bought the loans for the former  ‘Dublin Central’  (also known as the ‘Millennium Mall’ and Carlton [Cinema] site as part of Project Jewel, Nama’s biggest portfolio. The site stretches from O’Connell St to the controversial ‘El Alamo’ site on Moore St.  Permission for large-scale development on the site was originally obtained by developer Joe O’Reilly’s Chartered Land.  It envisages a five storey over basement retail and office scheme at 40, 41 and 42 O’Connell Street Upper. The proposal includes 1,171sqm of retail and 2,654sqm of office space. Chartered Land’s original plan for an overhead ski-slope ‘park in the sky’ element was – amazingly – approved by  Dublin City Council but removed by An Bord Pleanála.

Numbers 40 and 41 O’Connell Street were the site of the old Royal Dublin Hotel which closed in December 2008. The site also embraces Dr Quirkey’s long-unlicensed Amusement arcade and a number of furry-dice shops.  A five-storey building will be constructed on the site of number 40. It will include a set-back terrace on the fifth floor overlooking O’Connell Street.
The site also includes Number 39 which was built in 1752,  is a protected structure and is the oldest surviving building on O’Connell St.
The Royal Dublin Hotel where corrupt councillors congregated in the heyday of rezoning dodginess in Dublin City Council.
Shenanigans over this site have been documented on several occasions in these columns. 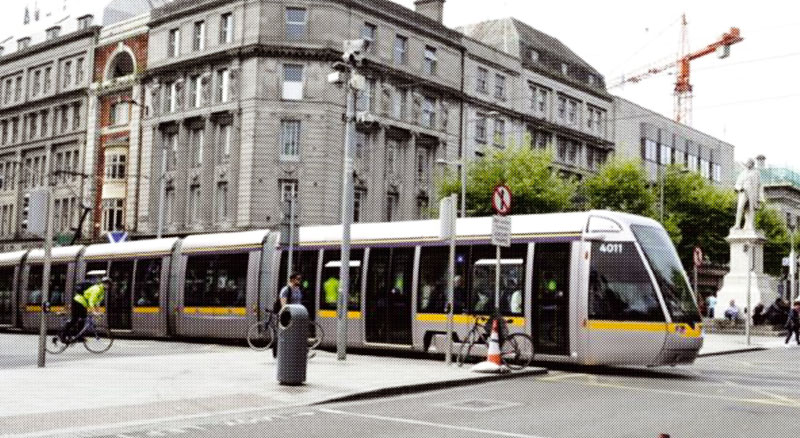 The Luas line will, from next year, disrupt the successful semi-pedestrianisation of O’Connell Street, perhaps diverting street activity to the exciting new civic space proposed for College Green. Strong arguments hold for streaming public transport down the cities main thoroughfare. However, confounding public transport with taxis is a mistake. Taxis are in fact chauffeur-driven private-hire vehicles, which constitute an inefficient use of city-centre street space , and exacerbate congestion, climate emission and air pollution impact.

In the 1980s when Dublin suffered a dearth of taxis and no night buses, many will remember long, chilly queues after a night out. Now Dublin has a greatly improved public transport system, an excellent bus link to the Airport , and city bike scheme.  The current over-use and over-supply of taxis is not in the city’s interest and needs to be curtailed, most of all in the O Connell St to College Green to South Great Georges St area.