At home and abroad, Ireland is mediocre on equality and useless on poverty – Richard Manton

A report for the European Commission in early April suggested that the last two Irish budgets have been marginally regressive ie favouring the better-off over the worse-off, and noted there had been a sharp increase in inequality since the economic crisis began.

Ireland assumed the Presidency of the Council of the European Union at the start of this year and will hold the position until July. Ireland’s Presidency Programme picks a gamut of “fights”. These included: the fight against poverty, the fight against hunger, and the fight against tax evasion and tax fraud. ‘Fight’ is a strong, emotive word – is there any substance to these call-outs?

In the ‘fight against poverty’, the Programme makes reference to the EU2020 Strategy, which aims to lift 20 million people out of the risk of poverty or social exclusion by 2020. Hypocritically, no mention is made of the fact that, last year, the Irish government reduced its own target from eliminating consistent poverty by 2016, to reducing consistent poverty to 4% by 2016. The European Anti-Poverty Network expressed alarm at this reduction and in its key message on the overall target said: “Austerity policies are generating poverty and undermining an inclusive recovery” in Ireland. Far from reducing poverty, European and Irish policy, through austerity, is concentrating wealth and thereby increasing poverty. Ireland, at the helm of the EU, is presiding over poverty.

The EU, which often touts its own role in international development, need not look beyond its own borders to see widespread poverty. 24% of the EU27 population is at risk of poverty or social exclusion, approximately 120 million people, up from 23% the previous year. At 38%, Ireland has the highest rate of children at risk in Western Europe and the fifth highest of the EU27. The Irish League of Credit Unions’ ‘What’s Left’ surveys are important indicators in the Irish media and have been “noted” by the Troika. The latest of these, based on December 2012, showed that 61% of people have less than €100 left at the end of the month once essential bills are paid, 36% have less than €50 and 20% have nothing at all. Another survey showed that 56% of Irish homes have been forced into debt to pay household bills. 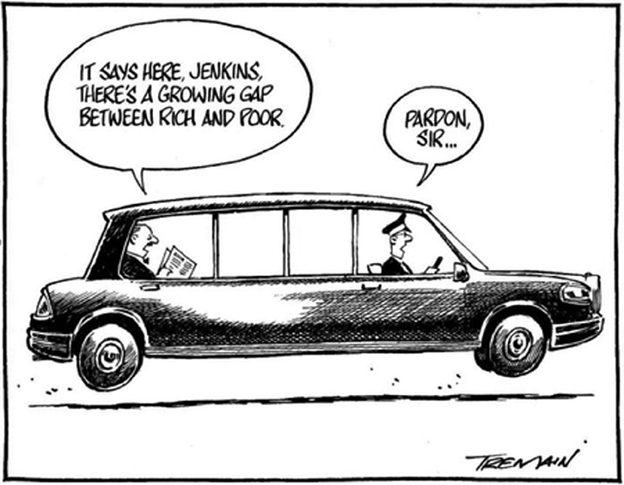 The CSO’s Survey on Income and Living Conditions demonstrates that almost one quarter of the population, over one million people, experienced two or more types of deprivation in 2011. These types of deprivation include: being unable to afford to replace any worn-out items of furniture, being without heating at some stage in the last year, and being unable to afford a roast once a week. This poverty has manifested itself in hunger, with 10% of the population or 450,000 people in food poverty.

Despite these levels of hunger and poverty, we remain a very wealthy society; but this wealth is concentrated in very few hands. According to the CSO and Credit Suisse, the total wealth in Ireland is €468 billion, around half of which is financial wealth. Half of this is concentrated in the hands of the richest 5%; however the true extent of accumulation is seen by looking at the top 1%. The richest 1% (36, 000 adults) hold a startling €131.5 billion or 28% of all wealth in Ireland. This is the same amount as is owned by the poorest 80% – 2.9 million adults! The poorest 50%, who between them own €22.5 billion, barely register in Chart 1. The richest 300 individuals in Ireland own €62bn, almost as much as the entire bailout package.

Furthermore, the top 5% of earners (111, 000 people) earn €15 billion a year after tax between them, or 21% of all income earned. The top 25% of earners make 55% of all income after tax (diagram below). The application of austerity in the last five budgets, far from closing these gaps or protecting the vulnerable, has actually seen the rich get richer. According to the CSO, between 2009 and 2010 the disposable household income of each of the ten deciles (10%) fell, except that of the top decile, the richest 10% – which increased. In the year following two austerity budgets, the poorest 10% of people got 26% poorer while the richest 10% got 8% richer. This effect was acknowledged by the European Commission last year: “Italy recorded a particularly sharp rise in financial distress followed by Greece, Ireland, Cyprus, Portugal and Spain, with the upper quartile seeing the greatest impact of the rise in all except Cyprus and Ireland where the lower quartiles bore the brunt”.

It is in this context that at least €64 billion (equivalent to 40% of annual GDP) of private banking debt has been taken on by the Irish state. According to Michael Taft – an economist working for the Union, Unite, Ireland has borne the brunt of European banking debt: 42% of the total cost of the European banking crisis. The application of austerity in Ireland cannot therefore be cleanly separated from the private banking crisis. The socialisation and subsequent repayment of these private banking debts has been a  transfer of wealth from across Irish society to investors in major international banks (the bondholders), from the side of labour to the side of capital, from poor to rich. Such a transfer (particularly in the context of austerity) is making the crisis worse as it reduces aggregate demand, ie consumer spending. Nobel Prize-winning economist, Joseph Stiglitz, describes this process as follows: “In effect, we have been transferring money from the poor to the rich, from people who would spend the money to people who do not need to spend the money, and the result of that is weaker aggregate demand”.

This process is epitomised in the recent promissory notes ‘deal’. Anglo Irish Bank’s private debts (ratcheted from failed property speculators) were guaranteed by the State in September 2008. The bank was nationalised in January 2009 and together with INBS was renamed the Irish Bank Resolution Corporation (IBRC) in July 2011. A promissory note worth €31 billion was created by the State to allow Anglo to receive funding from the Central Bank, indirectly from the ECB. The recent liquidation of IBRC and conversion of the promissory notes to 25-40 year government bonds not only does not represent a ‘good deal’, it completes the transfer of private banking debt to sovereign debt liable to be paid by the Irish public. According to Professor Terrence McDonough of NUI Galway, the deal represents little to no saving, will not reduce austerity, and is really a “scam”. The deal is also an intergenerational transfer: now, not only are the public forced to shoulder a debt not of their own making, our children will continue to pay. A child born on the night of the bank guarantee will be at least 44 years old before he or she will have repaid all of Anglo’s debts.

Gene Kerrigan’s recent book asks ‘Who profits from Ireland’s austerity?’. The answer: banking debts are owed to the major international investment banks including Goldman Sachs, who between then manage tens of trillions in assets. Nobel Prize-winning economist, Paul Krugman, has described austerity as: “an unethical experimentation on human beings going on across the world right now”. Austerity and the socialisation of private banking debt are making Ireland more unequal. In the book The Spirit Level: Why More Equal Societies Almost Always Do Better, Professors Wilkinson and Pickett show that income inequalities in societies are directly correlated with health and social problems. New Scientist magazine, in a similarly scientific approach, finds:

“The policy implications seem obvious, if politically contentious: a more even distribution of wealth would improve health on national and global scales. […] a clearer picture is emerging of inequality and its relation to health, self-worth and the ability to participate in society and to take control of one’s life”.

More unequal countries tend to have lower life expectancy, higher rates of obesity and higher rates of homicide. In particular, inequality has been shown to cause crime, as Wilkinson and Pickett put it: “inequality is structural violence”.

Globally, around one billion people are going hungry, yet there is extreme fortune too. Another “fight” picked by the Irish Presidency Programme is the “fight against tax fraud and tax evasion”. There is at least €21 trillion hidden in secret tax havens, yet nothing substantial has been done to reign in some of this wealth. Oxfam, in a report released in February, showed that the income of the world’s richest 100 people in 2012 was enough to end poverty four times over. According to the report: “The richest 1 percent has increased its income by 60 percent in the last 20 years with the financial crisis accelerating rather than slowing the process” and “consolidation of so much wealth and capital in so few hands is inefficient because it depresses demand”. The report proposes free public services, progressive taxation and closing tax havens to return inequality to 1990 levels. However, the report draws short of questioning the system that has produced such concentration of wealth, inequality, poverty and hunger. The burden of the economic crisis could  be eased by increasing income tax on high earners and introducing a wealth tax (see paragraph 3), but the prevalence of poverty and hunger in society is a product of the profit-driven society in which we live.

Marx in his tome on capitalism, ‘Capital’, shows that the accumulation of capital, ie wealth, is systemic as it is a consequence of the need for individual capitalists constantly to reinvest their profits to stay competitive. However, such accumulation reaches a point at which investments fail to return a profit – overaccumulation – and causes an economic crisis. No growth in the economy equals no accumulation of profit from increased production and, therefore, a need for capitalist accumulation to reorient towards workers and the poor. Put simply: in times of crisis, when the pie stays the same size or shrinks, the rich will only get more pie on the basis of the poor getting less pie. Marx describes the “intimate connection between the pangs of hunger of the most industrious layers of the working class, and the extravagant consumption, coarse or refined, of the rich, for which capitalist accumulation is the basis”.

Increasing poverty in Irish society flows from the success of the rich in maintaining (or extending) their bloated standard of living. The European Union can say what it likes in policy documents; however, if austerity continues, poverty will thrive; and as long as we live in a society based on profit, poverty will be an inherent part of society.

Richard Manton is a PhD student at NUI Galway and journalist with Youth Media and the Irish Presidency, a Youth in Action initiative run by European Movement Ireland.