Against the Grain –Constantin Gurdgiev 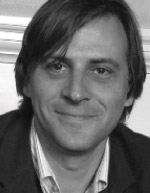