With water charges back, as the Oireachtas water committee considers ‘excessive use’ charges, it is timely to look at the theory which underlies water-pricing.

Austerity and the arrival of the Troika to Ireland exposed the fact that several aspects of water services provision have been critical issues for decades.

Not unique to Ireland, these issues have been addressed by the roll-back of what is known as the  ‘hydraulic’ or ‘municipal’ model of water provision and the roll-out of what Karen Bakker has called a market environmentalist model. This shift remains uneven and contested.

The hydraulic model, which evolved after states first took interest in supplying water as a public good and a public health measure in the nineteenth century, treated water as a plentiful resource. Provision was supply-led, with an emphasis on equity and universal access. Water was paid for primarily through general taxation, and user charges, in place across Europe, were treated as a supplementary form of income. For infrastructure costs too great for general taxation, government bonds were issued.

Crises in municipal water services date from the 1970s, when several aspects of the hydraulic model became no longer tenable. In particular, ageing infrastructure required new investment, in a strained financial climate. Other pressures have since emerged, including: the cost of developments in water treatment technologies; higher health and environmental standards for drinking water which, in the case of EU member states, are set supra-nationally; and threats to supply induced by climate change, with drought and flooding affecting the quality and continuity of supply. 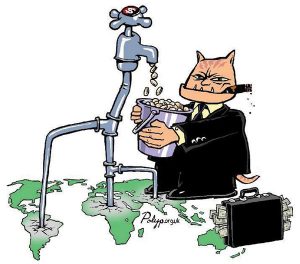 Market environmentalism marks the merger of neo-liberal thinking about the role of the State and the growing influence of market-based thinking in solving environmental problems. The hallmarks of the market environmentalist model of water provision are that it is demand-led and fully costed. In the process the understanding of water as a public good is displaced by the understanding of water as an economic good.  It is assumed that the price signal is a key policy instrument for regulating demand and supply, as well as central to changing behaviour, ‘valuing’ the environment and conserving scarce natural resources. This is underpinned by a discourse of ‘state failure’. The state is berated for its neglect of water services infrastructure, yet public funding and public management is also assumed to be a sub-optimal solution leading to inefficient and unaccounted-for subsidies which private-sector involvement and commercial-pricing rules will overcome.

In practice, private involvement in the water utility sector has grown in a variety of complex, hybrid relationships. With the exception of England and Wales, ownership of water supply systems in Europe have remained in public hands. Rather than complete state withdrawal via privatisation, the neo-liberalisation of water can involve the roll-out of new institutions and the forging of complex state-market relationships. These include the commercialisation of water utilities, as well as their financialisation in the sense of the increasing influence of financial motives in how water is funded and managed, and the commodification of services.

Ireland’s water services funding challenges stem from the decision to abolish domestic rates, under which water charges were subsumed, in 1978.  As early as 1983, local authorities were re-granted the power to levy charges for water, sewerage and waste. Mounting resistance and the near political success of an anti-water charge candidate in a Dublin by-election led to the withdrawal of local authority power to charge domestic users for water, in 1997.  Against that background also an exemption from the water charges element of the EU Water Framework Directive was sought and achieved by the Irish State. However, even during the early to mid-2000s, domestic water charges were never completely off the political agenda.

By the late 2000s, before the arrival of the Troika, ideas to re-introduce water charges, to introduce domestic water-metering, and to rationalise the sector by creating a single water utility burgeoned in domestic policy proposals. In particular, recommendations made in 2009, by both the Commission on Taxation, and by the Special Group on Public Service Numbers and Expenditure Programmes, bore the increasing influence of market-environmentalist ideas regarding water pricing and cost recovery. Troika conditions relating to full cost recovery for water services and the establishment of a water utility that would become self-funding over time were therefore not completely new and externally imposed ideas.

However, attempts to commercialise and financialise the management and funding of water by establishing Irish Water as a commercial semi-state company, and efforts to commodify water by converting citizens into Irish Water customers have all essentially failed.

Resistance to water charges has, in effect, rejected the notion of water as an economic good and asserted its unique social properties as a good held in common, and a basic need essential to human life, which should therefore be provided without regard to ability to pay. The likelihood of charges being limited to excessive or wasteful use of water, as recommended by the ‘Report on the Funding of Domestic Public Water Services in Ireland’, means that the state, and the social aspects of water, remain much more central to water provision than countenanced by the market environmentalist model and its world of water customers.

Yet the Report’s ‘fix’ on the matter of domestic water charges does not allay the long-standing challenges associated with adequately funding water services provision. As well as the challenge of defining what excessive or wasteful use of water IS, the challenge of how to fund water provision, whether as “a dedicated tax, a broadly-based fiscal instrument, or an adjustment to existing taxes”, as the Report puts it, remains.  Irish Water estimates that capital costs associated with up-grading water-services infrastructure, to comply with quality standards, are in the region of €13 billion. Though not limited to domestic water supplies, the Environmental Protection Agency suggests that Ireland is a long way off meeting the legal requirements on water quality specified by the EU Water Framework Directive. In addition, lack of compliance with the Urban Waste Treatment Directive in 38 locations across Ireland has resulted in an infringement case being taken by the European Commission against the State.

While efforts since 2010 to neo-liberalise water along market environmentalist lines have not progressed and reflect a long back-story of political troubles with water charges, in other respects there has actually been a longer and less visible process of neo-liberalising water services delivery.

Since the State embraced Public Private Partnerships in 1999, research by Eoin Reeves shows that over sixty per cent of all Public Private Partnerships in operation are contracted in the water sector. A strong element of the rationale for preferring PPPs is the assumed value for money over traditional public-sector procurement which, as Reeves has found, undermines the objectivity of value-for-money tests.  Moreover, there is very little transparency involved in the procurement process. These contracts typically operate on a design, build and operate procurement model, with contracts awarded to private companies for up to twenty years. Previous local government procurement practice involved issuing separate contracts for the design-and-build element of infrastructure followed by the takeover of facilities by Local Authorities. Existing contracts still have some years to run. On termination, because of the switch in government role from provision to regulation and monitoring, skills and expertise in the public sector in the operation of water services will have been lost. This increases the likelihood of re-contracting the services to private operators.

Under the Water Services Act (No.2) (2013), 970 contracts for water services were transferred from local authorities to Irish Water. Not all of these are for full design, build and operate services, but they do give an indication of the range of transnational water corporations involved in providing services in Ireland.  These include Veolia Ireland which operates more than 30 plants, and Glan Aqua a subsidiary of the Portuguese group Mota-Engil, also operating approximately 30 water treatment plants.  Other companies include Aecom whose global headquarters are in Los Angeles and which is involved in design, build and operate infrastructural projects across 160 countries.  Companies with UK origins such as Severn Trent Response, Northumbrian Water Projects, Anglian Water International (the latter two now owned by global investment consortia) also have an Irish presence.  Since the establishment of Irish Water a total of 115 design-build-operate contracts, operating across 232 different sites were transferred from Local Authorities.  Internationally, as Global Water Intelligence has found, Public Private Partnerships have become the preferred mode of operation of many private water companies, because they represent model of making money out of water that is more bankable than outright private ownership.

The commodification and commercialisation of water-services provision has failed, yet this failure sits alongside a longer-term process of privatising the operation of water-services infrastructure. Meanwhile the challenges of adequately funding water services and more broadly protecting water as an environmental resource remain unsettled.

Dr Fiona Dukelow is College lecturer in Appied Social Studies, University College Cork.
This article is based on ‘Irish water services reform: past, present and future’ in Murphy and Dukelow (editors 2016), ‘The Irish Welfare State in the Twenty-First Century: challenges and change’.