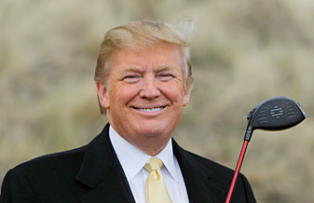 The news that bouffant New York billionaire Donald Trump has taken over the troubled Doonbeg Golf Links in West Clare, apparently for a snap-up price of €15 million, has been greeted with mixed feelings in Ireland. His second golf links in Europe adds to a 15-course empire that extends from California to Dubai.

The world-recognised Trump name and brash management style is a fresh ingredient to a diverse mix: the golfers who love links courses and Doonbeg’s potential, locals keen to see a hard-won local employer stay in situ, a group of farmers with exclusive access to a right of way, conservationists concerned about a unique sand-dune system, wind-farm developers who want to build in the area, surfers who won legal access to the adjacent beach, and ­a near-microscopic snail called Vertigo Angustior that has a habit of either making a mad nuisance of itself or underscoring environmental diversity in salt marsh and dune systems, depending on your point of view.

As an unlikely ambassador for conservation, it is unfortunate for Vertigo that it has often found itself pitted against developer interests. Bertie Ahern famously indulged in some rare alliteration when blaming cost overruns on motorway projects on “swans, snails and people hanging out of trees”.

Trump too has been dismissive of this particular snail, stating it is found all over the world and that it was originally believed it was endemic to Doonbeg. The first part of the statement is pretty true; the second not so much. According to the International Union for Conservation of Nature (IUCN) Red List of Threatened Species, the snail is found in 33, mostly European, countries but is classed as ‘Near Threatened’. In Ireland, its once-estimated 21 wetland habitats have been reduced in number over the past decade.

Trump, however unwillingly, assumes the mantle of protector of the dunes and of the snail, in line with the original planning permission for the 2002 development and links design by Greg Norman. He is now looking for a redesign and may incorporate some of the dunes in the course, which some golfers find confusing to negotiate without a caddy. “Even a poor caddy is worth it to get you around with minimal frustration”, goes one Tripadvisor comment.

Caddies in fact are a big part of the summer employment at the links, forming around 50 of up to 280 staff working in the hotel and golfing facilities. After the nearby Moneypoint power station, it is the biggest employer in an economically marginalised area where, within living memory, shoes were swapped between family members on Sundays.

The Doonbeg links as a business came out badly from the property bust ­–  a receiver was appointed following a €20 million pre-tax loss in 2012 – but it has managed to capitalise on its footfall. It has an annual turnover of over €11 million, with some 30 weddings a year adding to the golfing and hotel lettings income. Model Glenda Gilson has added her name for the forthcoming season to the tally of celebrities settling on the resort for their wedding receptions,

Unlike Trump’s other recent foray into Europe – the purchase of lands and subsequent development of a links course in controversial circumstances in Aberdeenshire – Doonbeg started as a community initiative when members of the local community development association approached Shannon Development to market the dunes system as a golf course. Back in the pre-Celtic Tiger years, they viewed it as a way of keeping some of the young people in the area and reversing decades of emigration. Twelve years after the links came to pass, this has been proven to be true even if plenty of young people have decamped abroad.

What is popularly known about Trump in recent times has been garnered through his appearances with his friend and ex-CNN presenter, Piers Morgan, his brief foray into US electoral politics in 2012 -when he considered seeking the Republican nomination, and his ignominious baiting of Barack Obama to get him to produce his long-form birth certificate (which he did). But Trump has been on the US scene for a long time. He has been doing property deals since the late sixties. He built his place of residence, Trump Tower, on Fifth Avenue, in 1983, the Central Park ice rink shortly afterwards, and was parodied as the epitome of propertied wealth in the 1991 novel, ‘American Psycho’. He overcame bankruptcy in the nineties and today has a string of residential, hotel and golf properties all with the Trump signature name – and a net worth of $3.9 billion, according to Forbes.

More pertinent to Doonbeg is the controversy in Scotland, his ancestral home on his mother’s side, over his development of a links in Aberdeenshire, his first foothold in Europe. A BBC documentary, You’ve Been Trumped, chronicles the works on the environmentally protected site and his tussle with local residents who objected to his presence.

A blog on Doonbeg Community Development Ltd’s website warns of what is often perceived as an overbearing style of intrusion. “The jobs are great but beware of the cost and be prepared”.

At the moment, Trump must bear the extra costs. Coastal erosion due to storms has nibbled at the edge of the 450 acre-site, and fencing laid to protect the dune system from the encroaching Atlantic has been swept away. The operators have had tussles with Clare County Council and the National Parks and Wildlife Service, on how to work out the next moves.

“I cannot say everybody always agrees but we did not agree before Trump either”, says managing director of the resort Joe Russell. “We have lengthy meetings and agendas are lengthy”.

The local community has welcomed the latest development and the investment it entails even if there are some fears that the Doonbeg name is being lost to the Trump name. The new name for the resort is Trump International Golf Links and Hotel Ireland.

“There is a need for a function room at the hotel and maybe a swimming pool, which would be marvellous”, says Doonbeg Community Development chairman Willie Hanrahan. “If it does increase the number of people who come to the area, it is all to the good”.

Trump has also found common cause with locals in his opposition to wind farms. He pulled back from a second development in Scotland because an offshore wind farm is going ahead. He is equally opposed to the nine-turbine plan submitted at a site three miles from his new acquisition. It is a scaled-down version of a 45- turbine plan that was rejected by An Bord Pleanála last year.

Russell points out that he had objected to the wind farm applications even before the Trump acquisition, saying they are unsuitable for an area that relies on scenic views for tourism income and through which the new Wild Atlantic Way runs.

“I have no objection to wind energy but it has got to be carefully planned”.

He is bullish about the future, pointing out that, since been given the title of European Golf Resort of The Year by the International Association of Golf Tour Operators in 2010, the resort’s numbers have “soared”. Now a ballroom, a swimming pool and a fitness centre are being mooted to complete its five-star quality.

“Donald Trump has expressed his interest in getting the golf course back up and running and making it one of the best in the world. He is not a yes man. He is seen as somebody who continues to challenge and grow his own business. They have a fantastic hotel collection and a fantastic golf collection. We are buying into all those channels in relation to sales”.

The legal issues that bedevilled the development in its early days have been resolved. A few people resented the loss of access to the magnificent beach. For generations, farmers had used its sand for bedding, and some people had even washed the salt out and used it for building purposes. Otherwise there was some trampling and sliding on the precious dunes system by children. Walkers enjoyed the beach but it was a big desert for swimming for its treacherous rip currents and undulating surface. Then it was discovered by a generation of surfers as an exhilarating, isolated alternative to the bustle of Lahinch, further up the coast.

Along with groups of farmers, the surfers flexed their muscles when the original American investors’ planning application to build a links course was lodged. The surfers, represented by the Lahinch-based West Coast Surfing Club (WCSC), had a pedestrian right of way at the 15th hole upheld in the courts.

Cliodhna Fawl of the WCSC says members hope to meet the new management in the future to develop a working relationship. But as far as the WCSC is concerned, the hard-won right of way stands. “A right of way is a right of way”, she says transcendently.

For the moment, even Vertigo Angustior is holding up. In 2010, its numbers were reported to have increased to 60 million from 10 million, underscoring a rare success story for sensitive development and conservation brought about by a court action by the Friends of the Irish Environment. Whether that delicate balance can be maintained,  and competing interests accommodated will depend on how the future plans for the course pan out. And the Donald.