A group of United States mental health professionals has expressed concern about the mental health of Donald Trump. Psychologist Dr John Gartner said: “We do believe that Donald Trump’s mental illness is putting the entire country, and indeed the entire world, in danger. As health professionals we have an ethical duty to warn the public about that danger”.

But what about duty to warn about his philosophy? Let us imagine that four famous dead philosophers, Herbert Marcuse, David Hume, Immanuel Kant and Plato, have been resurrected, and applied themselves to Trump. More unlikely, let’s pretend Trump opens himself to his philosophical side.

In his famous 1960s book ‘One-Dimensional Man: Studies in the Ideology of Advanced Industrial Society’, Herbert Marcuse described the Happy Consciousness, the amoral product of the technocratic age, in which “guilt feeling has no place”. A person with such a deficiency, Marcuse says, “can give the signal that liquidates hundreds and thousands of people, then declare himself free from all pangs of conscience, and live happily ever after”. Trump, No?

In ‘One-Dimensional Man’, Marcuse explained how nuclear-war planners represented this Happy Consciousness. They weirdly mixed the business of planning death on a nuclear scale with ‘fun’ talk about playing interesting games so trivialising mass murder.

Trump’s frivolous flippancy about the possibility of nuclear war between North Korea and its neighbours: “Good luck, Enjoy yourself folks”, and his failure to rule out using them in Europe reflect this.

Trump is a product of what Marcuse’s Frankfurt School colleagues called the Culture Industry – movies and TV. Despite its popularity the mass media is not democratic. The Culture Industry is an anti-democratic con job. As its Wikipedia entry says, “The culture industry perpetually cheats its consumers of what it perpetually promises”.

Trump is a creation, Marcuse would conclude, of the fraudulent Culture Industry that perpetually dupes addict-consumers by conjuring up prefabricated fantasies about the endless promise of the American Dream. Donald Trump used his image as a wealthy celebrity showman to spread these fantasies and manipulate voters, who were desperate for a glimmer of success, glamour or fame, as well as for someone to bring them well-paying jobs.

Marcuse claims that “advanced industrial society” creates false needs, which integrate individuals into the existing system of production and consumption via mass media, advertising, industrial management, and contemporary modes of thought creating a “one-dimensional” universe of thought and behaviour, in which critical thought and oppositional behaviour dissipate.

Philosopher Roland Barthes, quoted by Marcuse, speaks of “magic-authoritarianism” where “there is no longer any delay between the naming and the judgement, and the closing of the language is complete”. Examples of this include the casual way Trump declared to her face that he’d prosecute ‘crooked’ Hillary Clinton and his judgement of Barack Obama as “Bad (or sick) Guy”, after he decided the former President had had him bugged. Trump lies – and lies about his lies – because he is a One-Dimensional Man entirely severed from the Truth and its ascendancy over falsity. It is all just a narcissistic magic show, hypnotic entertainment – the Post-Truth Triumph of the Spectacle.

But in our fractious and dangerous era of media-generated ‘false news’ supported by international strategic hacking, leaking and subversion his powers are politically lethal.

David Hume warns not only about Trump, but his followers too

David Hume, the apostle of scepticism, might also have something to say about Trump’s dangerous personality cult. In Hume’s essay ‘That Politics may be reduced to a Science’, citing the political vagaries of humanity, he declared “should be sorry to think that human affairs admit of no greater stability, than what they receive from the … characters of men”. In other words, Hume as a professional historian, would declaim the folly of Trump thinking that only he – just one leader – could fix America’s problems – an assertion that history tends to mock. And being an astute moralist, and observer of human nature, Hume would also have questioned why Trump’s followers were gullible enough to be fooled by overbearing bombast into heralding him as the master problem solver. In another essay ‘Of Impudence and Modesty’, Hume remarked:

“Such indolence and incapacity is there in the generality of mankind, that they are apt to receive a man for whatever he has a mind to put himself off for; and admit his overbearing airs as proofs of that merit which he assumes to himself”.

Moreover, Hume forewarns not just about about Trump, but his indolent supporters.

Immanuel Kant would have been disgusted by Donald Trump, appreciating in him the philosopher’s worse nightmares. For Kant integrity, honesty and consistency were everything. Trump would be akin to a philosophical pornographic website (we assume that our reborn Kant is up-to-the-minute). 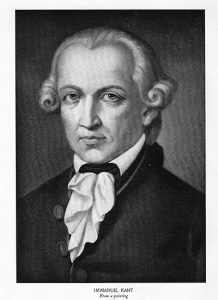 Kant had a dim view of an exclusive focus on sex. In his lectures “Duties towards the Body in Respect of Sexual Impulses”, he notes:
“Sexual love makes of the loved person an object of appetite; as soon as that appetite has been stilled, the person is cast aside as one casts away a lemon which has been sucked dry… Taken by itself it is a degradation of human nature…”.

Donald Trump, of course, engaged, as Kant would now be aware, in just such degradation: from beauty-contest-sponsorship to casual sexism and alleged real-life gropings. Kant might agree with Michael Moore, who noted that this predation explain why Trump rejects global climate treaties. Sexual predation against women and corporate predation against the environment are part of the same amoral game, which he characterizes as “crimes against humanity”.

Yet what makes this even worse for Kant is that Donald Trump has been elected President of the United States of America, a nation for whose original revolution he had been an enthusiast, even though he denied the right of revolution. Morally, Kant invested every action with the importance of a universal action. But nearly all of Trump’s actions are immoral. There is absolutely no evidence he even recognises ethics as a guide to behaviour. As a constraint on self-interest he considers it is the discipline of the Loser, perhaps his ultimate bogeyman.

Though reincarnated, Kant is now questioning whether he can live in the same miserable world occupied by Donald Trump, and his ilk. Kant is even wondering if suicide, which he definitively considered wrong under any circumstances since it “roots out morality from the world itself” might not be justified in the Age of Trump. Trump puts paid to Kant.

Plato: how democracy evolves from oligarchy and into fascism

Plato steps in to remind us that he warned us in his Dialogues what would happen in a society that overvalued wealth, when its oligarchic rulers were unable to wield their power effectively. The people would first replace it with democracy but then, in an over-zealous pursuit of freedom to the extent of subverting democracy elect someone who played on their wishes, resulting in mob rule and/or tyranny. Plato would cite in evidence the “Make America Great Again” concept, wall-building and xenophobia. Because a dictatorship flows from such mindless populism, Plato is now warning us that Trump (or post-Trump) Era fascism is a real possibility.

Plato is also intrigued by biographical and psychological reports that Trump has excellent acting skills. In the words of one biographer, we are seeing, “Donald Trump playing Donald Trump”, while a psychologist has observed: “Trump seems supremely cognizant of the fact that he is always acting”.

Plato perceives that Donald Trump fits the philosopher’s profile of a sophist. In his dialogue, ‘The Sophist’, Plato observed that sophists have “a place among the mimics” and thus are skilled in the “art of imitation” of genuinely virtuous persons, while at the same time engaging in aggressive, restless predatory behaviour using guile. Sophists are “skilled in the arts” of seduction – “wizards” and “illusionists”, Plato styled them. Predation, seduction, illusion: Trump.

Plato (in basic agreement with Marcuse, Hume and Kant) sees Trump as the Ultimate Predator, who seduced enough voters to win because he is a highly skilled sophist able to manipulate the images people watch within today’s electronic Plato’s Cave— our media bubbles.

Then the rest of classical philosophy jumps on the wagon

Of course cynical Machiavelli would find in Trump a soul-mate, with ethics suspended in the interest of means that justify the end. The Old Testament would provide backing for much of Trump’s unsubtle Schopenhauer pessimism and apocalypiticism (which may explain why some religious evangelicals surprisingly support him). In Hobbes, with his depressing view of humanity and life, Trump may find his champion: the problems of political life mean that a society should accept an unaccountable sovereign as its sole political authority.

But the most real prediction of Trump comes from Nietzsche. Nietzsche was particularly hostile to ‘Losers’ and would have appreciated Trump’s contempt as well as his perception of himself as a sort of ‘Superman’, buy act and birth. Trump and Nietzsche agree to promote the master morality over the slave morality. With the death of God, comes the loss of any universal perspective, of any coherent sense of objective truth. In ‘Daybreak ‘Nietzsche began a “Campaign against Morality”, identifying himself as an “immoralist. In Beyond Good and Evil, Trump finds justification for his view that evil is not the opposite of good. It impels his disdain for humanism. And Nietzsche grounds Trump’s sense of an Übermensch, of the superiority of the American, whose country he wants to make great again.

Trump agrees this philosophy stuff is for winners, and they hold a colourful party in one of his weekend retreats. The while history awaits the renewal of its worst mistakes.