When Mick Wallace raised some uncomfortable questions in the Dáil last October about the sale of Siteserv to Denis O’Brien and the role of the Irish Bank Resolution Corporation (IBRC) in the deal, he was roundly abused by government ministers, including his constituency rival, Brendan Howlin.

Phone calls were made to several newsrooms by O’Brien’s media handlers and Wallace’s speech went largely unreported. Some days later, the former chairman of the IBRC, Alan Dukes, protested loudly over the remarks in a lengthy column in the Irish Times and called for the comments to be withdrawn from the Dáil record by the Wexford TD.

His pertinent questions about the timing of the Siteserv deal and the subsequent award of the lucrative contract to install water meters to O’Brien’s company went unanswered and the controversy was buried until Catherine Murphy revived it, not for the first time,  in the House on Thursday 28th May. Once again the media were asked to suppress her comments and O’Brien, Dukes and others trotted out widely published attacks on the Kildare deputy accusing her, among other things, of lying and using stolen documents. O’Brien was given most of a page in the Irish Times on Tuesday 2nd June to attack Murphy whom, he said, had used Dáil privilege to “gain notoriety and political advantage for herself”. 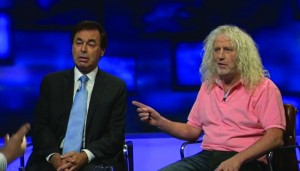 “O’Brien himself with his court injunction on RTÉ has made a circus out of it to such a degree that his own friends in Fine Gael are distancing themselves from him and his threat to Dáil privilege”, Wallace said of the latest twist in the IBRC/Siteserv debacle.

“I got a call from one journalist in a national paper last October to say that several news outlets had been contacted and warned not to pursue what I said in the Dáil about the Siteserv deal. Dukes had a free run at me in the Irish Times”.

As someone who has been the subject of vicious attacks in the O’Brien controlled Independent newspapers with no less than 19 front-page stories published about his financial difficulties in its daily edition, Wallace knows something about media interference and selective banking practices.

“I know how banks operate and the idea that Denis O’Brien would ring the bank to say he wanted the term extended on his loan repayments is perfectly normal. The difference on this occasion is that it is taxpayers’ money he is using. The question I was trying to get an answer to was: “How in God’s name did O’Brien’s company get the water contract so soon after buying Siteserv?’”. He is still waiting.

Wallace is not convinced that his namesake, no relation, and IBRC liquidator, Kieran Wallace and Eamonn Richardson of KPMG, will shine sufficient light on the controversy to allay many suspicions when his review is completed and has plenty of grounds for scepticism given his experience with internal investigations he has witnessed into Garda wrongdoing and other matters during his four years in the Dáil.

“If you follow what goes on in government it is a regular thing to see conflicts of interest in different inquiries and investigations. The penalty-points scandal was full of internal investigations that went nowhere. Many of the crime correspondents ignore serious wrongdoing in the force because they depend for their stories on the guards”.

Wallace has, with Clare Daly, been to the fore in calling for greater transparency and fairness in the way the country is run. He has had his share of trouble since the collapse of his company, M & J Wallace, which was put into receivership after he was unable to meet bank debts of some €41m.

However, he was not made bankrupt and says he still leases the wine bars and coffee shop in the Latin Quarter from the banks which took them from him; employing 55 people in jobs that pay well above the industry norm.

Notwithstanding the continuous years of hostile reporting of his financial affairs by the Irish Independent, Wallace insists that he settled his issues with the Revenue over the under-declaration of VAT which arose because of his genuine efforts to save his construction business, and made payments for thirteen months until a High Court judgment for €19.4m in favour of ACC effectively brought the company down. He also insists that the widely held, and reported, view that he withheld pension entitlements from some of his employees, is simply false.

“We paid every penny due of the pensions. I was fined for late payment and this was due to a row over whether we owed money for people who had left the company”.

After watching assets once valued at €80m drop to €20m in the property crash he believes that there is  another scandal about to emerge over the manner in which huge profits are being made by certain investors, including US vulture funds, which are getting in on the act while others are excluded from privately-organised sell-offs.

“The IBRC issue is just the tip of the iceberg when it comes to insider dealing in the sale of distressed assets”, he claims.

Across the country, Wallace believes that over half of the population is struggling to pay their bills at the end of the month and these are the people searching for a political solution to their personal and family crises.

“We have never witnessed such numbers of people in such a difficult place. These are whole sectors of society who are poorly represented. They want society run in a fairer manner. Sometimes I listen to people in the Dáil going on about things and they are clueless. There is a serious shortage of people with experience in the real world including how to run a business. And if you think the Dáil is a talking shop what does that make the Seanad. The greatest load of b….x”.

Wallace does not do clinics or attend every second funeral in the constituency as other politicians do with their time but he is a frequent speaker in the Dáil, contributing five or six times a week since he was elected after topping the poll, in 2011.

“I could top the poll the next time or I might not get elected at all. I said when I was standing for election that I don’t do parish pump stuff, clinics or funerals. I said I would be a national politician because that is what people need. I might lose votes from some people who supported me last time but I have stuck to my word”.

He might lose votes over his stance on other subjects including abortion where he supported Daly in her effort to repeal the Eight Amendment, and over their invasion of Shannon airport in search of US weapons. But it is his campaigning against austerity that is likely to shore his position when the election comes around over the next eight months or so.

“Neo-liberalism has never been as strong. The stupid decision to sell Aer Lingus which is a profitable company is an example. It is wrong to suggest that a small airline cannot be successful. Business does not have to be massive to survive”, he argues.

He believes that Fine Gael will be the strongest party after the election and may well have the option of joining with a few right-wingers from the Shane Ross or Lucinda Creighton groups of independents to form a government. He won’t be among them.

He welcomes the initiative which has emerged from the Right2Water campaign for a policy charter around which the left, including Sinn Féin, the smaller parties and left independents, trade unions and community activists could unite.

“I would very much welcome if a serious and substantial agreement around sensible and credible policies among like-minded persons on the Left was to come out of this initiative. I am not talking about a new party but a set of policies that the mass of the people who are struggling can relate to”.

He also believes that people are crying out for honesty and truth in the media and was angry but not surprised by the research of UCD lecturer, Julien Mercille, which showed that only 3% of articles written in the national press on solutions to the economic crisis were against austerity.

“What we are missing very badly is real, serious independent journalism. It could improve how most things are done in the public and private sectors if we had a media that were not so wedded to the neo-liberal agenda”. •