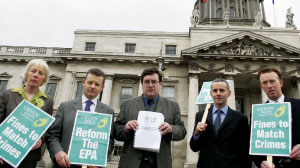 Unless any of you have had to witness you ageing parents suffer with runny noses, respiratory infections and coughing, streaming eyes 14 hours a day 365 days a year. Unless you have had to endure the arduous, lengthy, irritating and annoying process which we have had to endure for almost 5 years you will NEVER know the pain of dealing with an agency like the EPA which lacks the basic courtesy of replying to a registered letter which was written by my 73 year old mother in the early hours of a November night in 2009 because she could not sleep with the pungent, noxious, odours. Kerdiffstown, Co Kildare resident

The EPA is responsible to no-one. Its Board of Directors includes no non-executive Directors to represent the public or ensure good governance. While the Minister for the

Environment may make Regulations and issue Guidelines, the legislation makes it clear that “Nothing in the legislation shall be construed as enabling the Minister to exercise any power or control in relation to the performance by the Agency, with respect to a particular licence, of its functions”.

Any appeals against EPA activities – or lack of them – are made to the EPA. The Ombudsman is barred by statute from considering activities undertaken – or not undertaken – by the Agency. An inexpensive ‘environmental court’, common in other EU states, remains a dream.

The Green Party spent its years in opposition hammering the Agency, its activities, its Directors, and its Director-General, Mary Kelly.

Mary Kelly is a former Assistant Director, with responsibility for environmental policy, of the employers’ group, IBEC.  She was reappointed Director-General this year in spite of the Green Party’s opposition to the initial appointment which was said to have come following an interview process which attracted an unusually low average calibre of applicant. At the time, Trevor Sargent publicly suggested that the appointment “utterly compromised” the EPA as she was “too close to businesses”. In a telling insight into the power of the Greens in Government, it’s said that the Greens approved the reappointment because they were afraid that someone worse would otherwise be selected.

Village tried for more than six weeks to interview the Director-General – but one prevarication followed another. The offer is still open.

In spite of being a central plank of the 1997 Platform for Government, it took John Gormley three years to announce – in February of this year – a review of the EPA. And the review, which was intended to take three months, will soon be celebrating its first anniversary with no sign of reporting.

Meanwhile, the call for public consultation elicited more than 130 submissions from members of the public and agencies as varied as the Fisheries Boards, the Gardaí, the Presentation Sisters, and the County and City Managers Association (one significance absence was the Parks and Wildlife Service). The results are an astonishing catalogue of arrogant inefficiency in a dysfunctional State agency with 340 staff (including the proud beneficiaries of 44 doctorates and 100 masters degrees) which spends more than €60 million a year overseeing the deterioration of Ireland’s environment.

Endeavours to support scientific research are of course praiseworthy, but the Trinity College Dublin submission suggests that much of the EPA’s research is in fact wasted because “there seem to be few, if any, officers with environmental policy, environmental economics or environmental studies expertise and so limited engagement with the project findings and therefore a lost opportunity to feed research results into policy frameworks”.

IBEC’s submission coyly suggests that “a view exists that the system is overly bureaucratic, inefficient, inflexible, and process-focused rather than outcome-oriented”. It hammers “the framing of regulations, the practices of the EPA and duplication” – identifying ‘regulatory creep’ as a stumbling block to doing business in Ireland. The Health and Safety Authority draws attention to its experience of even small procedural matters requiring referral to the EPA board, resulting in ”delays in closing out issues”. Duplication appears even at the extremes of the EPA empire, with suggestions that offices like the Mallow hydrometric office could be amalgamated into the Cork office, the Donegal office into the Monahan one, and the Castlebar office into the Galway one.

In fact, a high proportion of the Irish environmental complaints addressed by the European Commission – and subsequent EU Court judgments – relate to EPA failures. The normally discreet European Commission responded to the Review, noting the “limited scope” of the Agency and the “general tendency” to seek sanctions only at the District Court level, where the fines are limited to €5000. The Commission said while it was not its role to comment in detail on funding, it would like to remind the Agency of the fact that the polluter pays principle was part of both the waste and water EU Directives. Only a quarter of the Agency’s funding is derived from licensing fees with an insignificant amount coming from convicted polluters.

Dan Boyle stated (before he joined the Government): “I believe that if we had a proper environmental body, a body in which the public had confidence and in which there existed a widespread belief that our environment was being properly protected, then many of our citizens should not feel the need of having to go outside and seek international support for the type of environmental protection we should be doing ourselves”.

Yet even vested interests like IBEC, who might be expected to feel threatened, or at least challenged, by the EPA consider the penalty régime imposed in the Acts to be “proportionate” and “sufficiently punitive”. IBEC reproduces the oft-repeated litany presentations: that regularly infuriates environmentalists during EPA non-compliance is controlled by a company’s concern for its reputation.

The first ‘systematic’ condemnation by the European Court of a member state’s environmental protection régime came with the 2005 judgment against Ireland on illegal waste. The Commission correlated 13 separate, unrelated complaints by Irish citizens and NGOs concerning illegal landfills around Ireland and slammed the country with a judgment that led to a reorganisation in the EPA and the disclosure of widespread illegal  dumping.

Yet, for example, it was only in May of this year – after five years of residents’ complaints – that the EPA succeeded in obtaining a High Court closure of the Kerdiffstown landfill in Kildare. In a concerted campaign, residents (and public representatives) of Naas, Sallins, and Johnstown called on the Government to ensure the EPA has “’executive powers’ to close unauthorised activities – rather than bringing proceedings in the High Court – and to appoint a non-executive Director as ‘over-viewer and whistle blower, ensuring adherence to good practice, respect for the interests of stakeholders and adherence to the process of boardroom discipline”.

Yet the Health and Safety Authority regularly closes down operations that pose a danger to public health. As one Kerdiffstown resident pointed out “even the Irish Aviation Authority can pull a licence to operate a plane”. Why not construct a regime where the EPA can shut them down – and then the operators can have the hassle of bringing a High Court case to review the decision? The Minister for the Environment’s powers are largely limited to issuing new Regulations – leading to allegations of ‘mission creep’ but no power to demand anything be done on the ground.

Not only can vast dumps continue to operate as the EPA considers the legalities of the matter, but the EPA removes the files from public access, as they did in Kerdiffstown for the last 5 years. One submission to the Review suggests that there are over 10,000 fly tipping sites around Ireland with more than 100 tons of illegally-dumped waste. And yet contributors to the Review claim that calls to the EPA Illegal Dumping Hotline remain unreturned.

The ‘dysfunctional’ allegation arises again and again, in part because the EPA was imposed on a well-developed system including an intricate (if unenforced) planning system, local authorities’ licensing systems, and, for example, the regimes for Fisheries Boards and Health and Safety. Often the rules allow that the EPA – or another State Agency – ‘may’ consult with each other – yet there is no requirement for the EPA to reply and when timeframes are given there is ample evidence that these are extended again and again.
The second key European Court judgment was about Ireland’s provision of water – and this led to long overdue legislation that allows the EPA to require Local Authorities to take appropriate actions.

Nowhere is the dysfunctonality of the EPA been more clear than in its role relative to the Planning Authorities and the Planning Appeals Board, An Bord Pleanála. The EPA Advisory Committee’s submission itself suggested that “current trends in SEA [Strategic Environmental Assessment] will turn the EPA into a shadow operation of An Bord Pleanála”.

Yet the EPA regularly denies that it is responsible for requiring an Environmental Impact Assessment (in spite of specific Regulations laying it down), instead referring the matter back to the planning authority for its ruling. But many projects are exempt from planning , either because they are pre-1963, have been ongoing for more than 7 years, or fall under one or another of the complex exemptions from our procedurally-intricate and unconsolidated planning legislation. If the project is exempt from planning the Local Authority may not require an EIA. Clearly this loophole facilitates ‘business interests’.

The control of wastewater – and septic tanks – also falls between jurisdictions, with a European Judgment against Ireland in October 2009 in spite of publication of guidelines on wastewater systems  by the EPA. Compliance is not going to be easy, according to an engineer in a western county with more than 30 years experience. He laid out in his submission the “fragmentation of bureaucracy in relation to the planning, design, installation, certification, maintenance and compliance in relation to on-site treatment systems for single houses”. The Local Authorities, The River Basin Districts, the Department of the Environment and the EPA all have roles – but this engineer suggests that unfortunately ‘the overriding predisposition of all participants not to take overall control has permitted a situation where the likelihood of pollution is on-going’. He calls this “outrageous, considering the knowledge, materials, and skills that are available to solve this problem”.

The same story of poor communications and untaken responsibility evokes particular dangers in the relationship between the EPA and Health and Safety Authority. The Health and Safety Authority itself suggests that “environmental chemical control lacks overall coherence” – and that “improvements to environmental sampling are required particularly in the context of monitoring air quality” which “became apparent during the joint assessment of the impact of volcanic ash”.

In incineration, this issue is further clouded by the failure of the EPA to have SOLUS procedures in place (an agreement where one party is linked only to the other party) leading to an unassessed two-way street between industry and its regulator. A previous EPA employee has a principal role in – for example – the company responsible for the Kerdiffstown dump while a key figure in a leading incinerator company joined the EPA while his previous employer’s incinerator application was still live.

The Review Group has received environmental snapshots of dysfunctional Ireland.