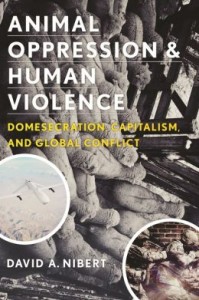 Scholars have argued that the domestication of animals for food, labour, and tools of war has advanced the development of human society. But by comparing practices of animal exploitation for food and resources in different societies over time, David A Nibert reaches a strikingly different conclusion. He implores humanity to shift to a vegan, or plant-based diet.

Nibert maintains: “The emergence and continued practice of capturing, controlling, and genetically manipulating other animals for human use violates the sanctity of life of the sentient beings involved”. He tees up a neologism, ‘domesecration’, and deploys it throughout the book, arguing that “their minds and bodies are desecrated to facilitate the exploitation: it can be said that they have been domesecrated”.

He traces an upsurge in human violence to the practice of stalking and killing animals which “began no earlier than ninety thousand years ago – and probably much later”, but fails to acknowledge that this was connected to the expansion of humanity into northern latitudes where edible plants were not available throughout the year, often making hunting a necessity for survival.

His basic thesis is that ‘domesecration’ has generated conflict between human societies because the amount of land required for raising animals for human consumption is far greater than that required to grow crops for direct human consumption. He emphasises how “domesecrated” animals act as vectors for zoonotic diseases, and displace countless free-living animals.

As an abolitionist he does not envision any possible way humans could exploit animals in symbiosis with one another and their environment. He begins his account in 1237 at Riazan near Moscow as the Golden Horde led by Batu Khan lays the city to siege. Nibert links the cruelty of those Mongols to their treatment of animals and shows their reliance on them as weapons of war and mobile sources of food. Conquest, in turn, was fuelled by a need for more grazing land. They terrorised Eastern Europe and China which saw its population drop from 123 million in 1200 to 65 million in 1393, laying waste societies engaged primarily in crop cultivation. As part of their general unneighbourliness, in all likelihood the Mongols introduced the zoonotic bubonic plague to Europe, leading to a reduction in its population of a half.

The effect of colonisation of the Americas on its indigenous people has been described by historian Alfred Crosby as the “greatest tragedy in the history of the human species”. Large numbers were displaced to make way for livestock from areas where they cultivated crops or hunted free-living animals; and, with few domesticated animals of their own, they were ravaged by zoonotic diseases, especially smallpox. Their numbers were reduced by two thirds.

It would be wrong to idealise the lives of indigenous peoples in the Americas before the arrival of Europeans. But it seems the virtual absence of domesticated animals curtailed warfare: “archaeological evidence suggests that pre-Columbian warfare was limited to small-scale raiding, sniping, and ambush”, and that the numbers of “deaths by violence were relatively low”. Hernán Cortes whose expedition led to the fall of the Aztec Empire in Mexico instantly foresaw the possibility of developing a cattle industry there. Livestock products, especially hides, were integral to the wealth accumulated by the conquistadores.

Nibert contrasts the colonisation of the Americas with the Spanish conquest of the Philippines, territory unsuited to livestock production. He says this supports “the thesis that colonisation was much more likely to involve large-scale violence when invasions involved expanding ranching operations”. To expand livestock numbers was also the primary motivation for the encroachment of Europeans into North America. The West was won by cowboys who cruelly displaced, and often massacred, large numbers from nations such as the Creek, Choctaw, Chicksaw, and Cherokee. In North America the fates of the native population and free-roaming buffalo, vital to their way of life, were intertwined. In the early nineteenth century there were up to thirty million buffalo roaming North America, but by century’s end they had been hunted to virtual extinction to make way for livestock. Nibert recalls the often wanton violence that accompanied their annihilation. In one account train passengers made a ‘sport’ of it: “As they neared a herd, passengers flung open the windows of their cars, pointed their breechloaders, and fired at random into the frightened beasts”.

With the West ‘won’, industrial slaughterhouses emerged, especially in Chicago. It was not pretty. Rudyard Kipling was horrorstruck by what he saw in the late 1880s and worried “about the effect of so mechanical a killing on the human soul”, though in his occasional jingoism and patronising espousal of whiteman’s burden he did not always apply stringency to the worth of human souls, or human life.

Nibert notes the important role of English capital in the expansion of livestock production into the Western plains of America in the nineteenth century. He also explores the English colonisation of Ireland and emphasises how Irish salt beef was a critical factor in the “profitable sugar production in the Caribbean because it was an important source of food for enslaved labourers on Britain’s plantations”.

‘In Ireland, primarily because of the Great Famine, there was a shift in the nineteenth century from tillage to pasture leading to depopulation of the countryside’

In Ireland, primarily because of the Great Famine, there was a shift in the nineteenth century from tillage to pasture leading to depopulation of the countryside. He quotes James Connolly’s description of this in Labour in Irish History: “Where a hundred families had reaped a sustenance from their small farms, or by hiring out their labour to the owners of large farms, a dozen shepherds now occupied their places”. Nibert does not discuss the Gaelic Irish mode of food production which was also heavily reliant on cattle. It might be argued that it represented a harmonious co-dependence between cattle and humans, with animals kept for dairy and rarely slaughtered. But all was not so genteel: cattle-raiding was endemic in medieval Ireland, or sustainable: most Irish forests had been removed by the fourteenth century to make way for cattle. The shift to tillage that began in the seventeenth century, abetted by the introduction of the potato, allowed the population to rise geometrically. It was only a change in demand in Britain after the Napoleonic War that caused Ireland to revert to pasture in the nineteenth century, a situation that endures.

In 1916 in Wichita, Kansas, a short-order cook called J Walter Anderson invented the first hamburger. This product offered new opportunities for the livestock industry which had come under attack for the poor sanitation and barbarity of the slaughterhouses. Companies such as White Castle, McDonald’s, Burger King and KFC stimulated a demand for meat products through the use of insidious advertising, often targeting minors. Ronald McDonald was thrust upon the yielding children of the United States in 1966 when he wobbled his national television debut during the Macy’s Thanksgiving Day Parade – accompanied by the ‘McDonald’s All-American High School Band’. The twentieth century witnessed the continued expansion of livestock production which hastened the two biggest environmental crises of our time: species loss and climate change. Surprisingly Nibert cites the conservative estimate that livestock generates 18% of total anthropogenic greenhouse gas emissions from the UN Report Livestock’s Long Shadow from 2006, rather than the figure of 51% found by Goodland and Anhang in 2009.

The twentieth century witnessed the emergence of CAFOs (Concentrated Animal Feeding Operations) as animals were increasingly fed on grain in cruelly enclosed spaces. Animal welfare activist, Ruth Harrison, observed: “if one person is unkind to an animal it is considered to be cruelty, but where a lot of people are unkind to animals, especially in the name of commerce, the cruelty is condoned and, once large sums of money are at stake, will be defended to the last by otherwise intelligent people”.

Aside from the obvious barbarity of corralling animals in such close confinement, CAFOs are a significant risk to public health because of the enhanced risk of zoonotic diseases, especially a deadly influenza virus, developing in such conditions. According to Michael T Osterholm, director of the Center for Infectious Disease Research and Policy: “An influenza pandemic of even moderate impact will result in the biggest single human disaster ever – far greater than AIDS, 9/11, all wars in the 20th century, and the recent tsunami combined”.

A surfeit of livestock products is also directly responsible for the onset of chronic diseases that are beginning to shorten life expectancies in the Western world. But also indirectly, as Nibert links the consumption of obesogenic sodas and meat-eating, quoting academic Richard Robbins: “The sugar in soft drinks serves as the perfect complement to hamburgers and hot dogs, because it possesses what nutritionists call ‘go-away’ qualities – removing the fat coating and the beef aftertaste from the mouth”.

During the twentieth century, livestock numbers increased across Latin America, especially Brazil where: “cattle pasture accounts for six times more cleared land in the Amazon than crop land; even the notorious [feed] farmers who have ploughed some 5m hectares of former rainforest cover just one tenth of the ground taken by the beef producers”. Indeed, US aid to Latin America was often linked to the extent to which a country could satisfy its insatiable demand for livestock products. Oppressive regimes willing to convert large tracts of arable land and jungle to pasture were supported against political movements, such as the Sadinistas in Nicaragua, opposing it.

As an unwavering abolitionist Nibert argues that do-gooder ‘new welfarism’ “actually promotes the continued oppression of domesecrated animals and the underlying global injustices” by “appeasing the concerns of the more conscientious citizens, thus blunting movements for more significant social transformation”. He claims apparently ethical animal products are only accessible to the rich, and if the entire population of cows raised for food in the United States was freely ranged, half the land in the country would have to be converted to pasture. He also dismisses any locavore argument. And domesecration squanders scarce energy: “the energy resources necessary to raise domesecrated animals for local consumption are considerably more than that required to transport plant-based food long distances”.

Controversially he argues that societies that still practise hunting for food should cease doing so. This might sound like excessive interference in ‘traditional’ ways of life. Our attitude to this will depend on whether we accept that there is a moral imperative to extend a right to life to other creatures where possible, or and if the practice of hunting contributes to inter-human violence.

His argument assumes that food will be supplied from elsewhere. Nibert states: “In a more just, vegan global order, a genuine policy of ‘comparative advantage’ could provide nutritious plant-based food and fresh water where it is needed throughout the world, including areas where many now have few alternatives to exploiting animals”. But it would put societies such as the Inuit in northern Canada at a significant disadvantage and be impossible to enforce. However, of far greater concern is the increasing spread of the Western diet to China and other developing countries.

It is difficult to envisage how a policy of comparative advantage can “transcend the capitalist system”, as he advocates. For the moment at least trade facilitates the realisation of vegan diets and for all its faults capitalism does promote the efficient exchange of goods, notwithstanding global inequalities.

It remains to be seen whether a more ethical capitalism emerges. Interestingly, Microsoft’s Bill Gates has been prominent in funding and advocating ‘analogue’ meat and egg products that could replace the real thing. The unpredictable extent to which consumers are wedded to meat will determine how capitalism embraces veganism. A company like McDonald’s hardly has an ideological attachment to meat – and with sufficient demand, and profit, perhaps a happier meal could be conceived, for happier times.