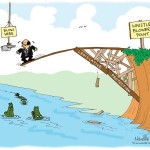 Jonathan Sugarman, a former Risk Manager, blew the  whistle on his then employer Unicredit Bank,  Italy’s biggest, which  in 2007 failed dramatically to maintain proper liquidity ratios – which keep banks from customer runs on their funds.  Village was the first to name Unicredit, despite threats from McCann FitzGerald solicitors that Unicredit would sue if implicated. Subsequently the Central Bank Financial Regulator’s Department,  announced that it would consider any information offered about the affair “in confidence” but when Sugarman contacted them they revealed that in fact they reserved the right to report him to the Gardai for criminal activity if he offered the Central Bank information that implicated him.  In the  end – in February – Sugarman bravely nevertheless met the Central Bank, which indicated that they had already asked Unicredit to recreate reports dating back to the alleged breaches in 2007 but gave no information as to how their investigations were proceeding.  Subsequently the Central Bank indicated, with no reasoning, that it was closing the file – and notably failed to produce minutes.  When the Irish Independent’s intrepid Mark Keenan recently started sniffing about the issue, the Central Bank finally sent minutes of the meeting,  It is not clear if the file remains closed, or why, and the Central Bank, for the moment is keeping schtum.

So water charges will not become fully operational until 2016, at the earliest. Coincidentally, a general election will be held before that date. Big Phil Hogan who has gone politically AWOL after presiding over the household charge and septic-tank fiascos, is now applying his monkey-repairing-a-television-set nous to domestic water metering. Bord Gáis has been awarded the contract for running the system. Expect to hear very little until the last minute, and certainly no justifications for any new unpopular taxes from this, the State’s least ideological Minister ever.

Reflecting the general stasis, it is remarkable how small the fluctuations in the numbers of unemployed are. Even anecdotally there is little talk of hordes heading to Nirvanas in the New World. A beleaguered domestic population has resigned itself to pestilence and reality TV. Numbers on the register have fallen only marginally, from 440,300 in January to the current level of 434,400. In 2012 the unemployment rate has moved between the very narrow band between 14.7% and 14.8%.

Letterkenny coming to the Home Counties

With the Cabinet reshuffled to incorporate even more Oxbridge Tories and Northern Ireland secretary Owen Paterson installed as Minister for the Environment it is interesting that Britain’s Chancellor of the Exchequer George Osborne has signalled plans for a major deregulation of planning laws, raising the prospect of allowing more development of England’s 6,000 sq miles of green belt land. He wants to see more “imaginative” thinking by planning authorities and, in thinking redolent of swan- and snail-hating Bertie Ahern, will ‘fast-track’ whatever it takes by October. Ireland doesn’t really bother with green belts, so no lessons there for us, anyway.

Osborne also refused to rule out the option of building a third runway at Heathrow, saying “all options” were being considered. This has annoyed Zac Goldsmith, the toffee Tories environmental conscience and Boris Johnson, not to say the Lib Dems (remember them), who note the expansion was foresworn in the coalition’s manifesto.

Clegg should dial up the blower to John Gormley for a pep talk.

The implosion of the Socialist Party over Clare Daly’s support for Mick Wallace can only be rated as a victory for those behind the Irish Independent’s vitriolic campaign against the financially troubled property developer turned TD. At the height of the controversy earlier this summer surrounding Wallace’s outstanding debts to the Revenue the Indo bizarrely ran the Wexford TD’s problems across its front page every day for two consecutive weeks. As many of the remaining Socialist Party and ULA deputies ran for cover the heat came on Daly for standing by, and in the Dáil continuing to sit with, the embattled Wallace, who apologised for his unquestionably unacceptable dealings with the Revenue Commissioners and offered to pay them half his salary. For some in the Socialist Party turning on Daly provided a long awaited opportunity to cut the Dublin North representative down to size particularly in light of her strong media and Dáil performances since elected as their second TD. Those who relented in the face of the campaign by the Independent News and Media titles against Wallace did not seem to notice the irony of a media group attacking a politician over his revenue problems when its tax exiled owners have been evading their responsibilities on multiples of the amounts owed by the Wexford TD for decades.

Villager has replaced his plastic-framed Athena poster of Brad and Angela, ‘Brangelina’ with one of Clare and Mick. Click?

Day one: Mitt Romney, man of action, will “declare China a currency manipulator, allowing me to put tariffs on products where they are stealing American jobs unfairly” . Futurology does not record what the reaction of China will be, nor on what day. But Villager notes that China is the biggest foreign buyer of US debt securities. If it decides not to participate in the next Treasury auction, desperate recourse to the financial markets will be required, sending interest rates soaring and, most importantly, polls dipping.

No-one in Ireland cares about Genetically-Modified food and how they may spawn irrepressible super-species. Teagasc (whatever that is) was recently granted permission by the Environmental Protection Agency to grow GM spuds and they’ve apparently now been planted at Oak Park. Minister Phil Hogan can instruct Teagasc in writing to do, or undo, anything he wants, so ultimately the decision falls on his desk.

Meanwhile, twelve applications were made in the High Court recently for NPE (Not Prohibitively Expensive) Orders by EU citizens, invoking the only-recently-ratified EU Aarhus Convention. The NPE Orders sought protection from risk of exorbitant expenses in this, the most expensive legal system in the EU. But the potatoes are growing away, oblivious.

Village has in the past noted the correlation between meaningful surnames and personality or profession. So for example, in a move that may presage development of a new Heathrow runway, Minister Justine Greening has been moved out of Britain’s transport portfolio. Meanwhile, Nick Buckles of security giant G4S admitted, under severe time pressure, that the firm couldn’t meet its obligations to provide security staff to the London Olympics. Villager has always been disproportionately fearful of the Communications Clinic, led as it is by Terry Prone and the Savage family – if only because of the potential for Nice/Nasty role-playing on their PR victims.

Villager is surprised how little fuss is being made of Rory Coveney’s appointment as special adviser to Noel Curran, DG of ‘independent’ broadcaster, RTÉ. Coveney is brother to Greencore MD Patrick and Minister for Agriculture, Simon.

The recent An Bord Pleanála approval for demolition of nos. 32 and 33 Henry Street was the worst decision in Dublin City in years’ according to Kevin Duff of An Taisce. It runs counter to recent decisions on Frawley’s in the Liberties, the Ardee House pub on Newmarket and a number of buildings on King St – where demolition has recently been refused. The buildings are in what is supposed to be an “Architectural Conservation Area”.

The Henry St buildings, once the Tower and Arch pubs, are the only ones on that street to have survived the fires and destruction which occurred during the 1916 Rising and the Civil War. They were occupied by volunteers during the 1916 Rising. Henry Place, which is the laneway along the side of no. 33, was the route that the evacuating garrison (including five of the leaders) travelled towards Moore Street from the burning GPO on the Friday of Easter Week 1916. The ‘Save Moore Street’ group want these buildings and laneways to be declared a battlefield site and protected.

Anomalously, the current government has set up a 1916 Centenary Committee and Minister Leo Varadkar recently instructed Fáilte Ireland to examine the possibility of opening a 1916 tourist trail. There is a chasm between the Bord Inspector’s Report and recommendation and the Board’s decision to grant (a split decision 3:3 with the casting vote by the Chairman). The Inspector’s reasons for recommending refusal were detailed but the Board stated, “In deciding not to accept the Inspector’s recommendation to refuse permission, the Board considered that the demolition of numbers 32 and 33 Henry Street, neither of which are protected structures or referred to in Appendix 2 of the O’Connell Street Architectural Conservation Area 2001, was justified on the basis of the restoration of numbers 68 and 69 O’Connell Street and 31 Henry Street, the quality of the proposed replacement building and the need for Dublin City Centre to play its role at the top of the retail hierarchy”.

As to 68 and 69 O’Connell Street the Inspector was less convinced: “the heritage value of the existing structures on site is mainly to do with their external appearance and contribution to the streetscape with the level of features internally not exceptional or hugely significant in terms of architectural heritage”. So the Board is approving partial demolition of the streetscape in order to protect the streetscape. Local traders are said not to be amused.

Lawyers get stuck in to SIPO, at taxpayers’ expense

The City Council and Labour’s Councillor Oisín Quinn will be in the High Court in October challenging the Standards in Public Office Commission (SIPO)’s decision to find Quinn breached ethics legislation in proposing resolutions in Dublin City Council that could have raised the height of the Revenue Commissioners Building on Mount St that he and his family own. Village’s editor who initiated the complaint to SIPO is a notice party.