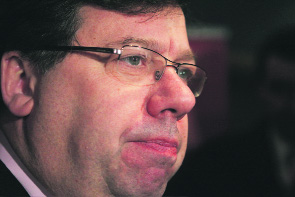 Brian Cowen and Barack Obama have an extraordinary amount in common.  Both are in their late forties, both are lawyers educated at elite law schools, both are articulate – much more articulate than their predecessors, both have two young daughters and beautiful wives.  They lead the two English-speaking countries with the highest average incomes. And both come originally from, um, Offaly.  But there the parallels divide.

Mostly they are different, as different as it is possible to imagine two heads of government. It is unfortunate for Ireland (though not for the world)  that the contrasts are all to Cowen’s disadvantage.

Many of the extraordinary characteristics of Obama are rooted in the culture and politics of the US and his place in them.  There is no way Ireland could have generated Obama.

Let’s have a look at the forces that make these men what they are and see if there is  anything at all that our man can learn.

Backgrounds of Obama and Cowen
The USA is diverse. Obama comes not just from Offaly but from Offaly via Kenya, Indonesia, Hawaii and Chicago. Such dramatic journeys are not uncommon in America. There is drama too in the fact he is a half-black man in a country where, within living memory, an African-American man would have had to give up his seat on a bus. More important even than these nuggets of race and geography, it was a big help to Obama that he has a “back-story” that can only be described as epic. His Kenyan academic father left home when young “Barry” was two. His mother was dependent for much of his childhood on food stamps.

In contrast, Ireland’s political classes are fairly homogenous. Brian Cowen comes, so far as we know, from Offaly via Offaly and was never discriminated against.

Background and the political system
Background is crucial in US politics. Most US Presidents come to the fore by championing their tribes, to gain a core constituency. Catholics, Jews, Hispanics, women, gays and blacks have all made self-conscious sorties into the Presidential or other important political processes.

Because of the US’s diversity a President cannot be elected if he or she is seen to represent the members of only one tribe. Candidates typically use their tribes as a necessary springboard – and then extend their appeal to other tribes by policies. Candidates must try to get into the heads of citizens completely different from themselves. This forces them to think and campaign on a scale that is large and wide.

In Ireland we have had a couple of Marys in the Presidency but female is about as politically “disadvantaged” as it gets at the summit; and an exotic or disadvantaged background does not necessarily count for much generally, and certainly has never given any Taoiseach any component of his initial platform.

Trajectory of Obama and Cowen
Background is fundamental but for Americans movement in the right direction is essential.

The American dream is self-advancement.  Americans have a particular soft spot for people who make good from humble origins. Indeed politicians often compete with each other for claimed childhood impoverishments in the electoral equivalent of the Monty Python “child down’t mine” sketch.

For Obama the later upswing is just as dramatic as the initial disadvantage. Barack made it to Columbia and Harvard Law School where he edited the law review (but chose a career in community activism). He is even a multi-millionaire from autobiography sales.

In Ireland, fewer politicians seem to make good from deprived backgrounds and they do not seem to be much prejudiced electorally by coming from above-averagely advantaged backgrounds. The epic sense is not really possible in Ireland. Unless perhaps you live, as no-one ever again will, through a war of independence and civil war and, almost alone in Europe, understand the theory of relativity (like DeV).

Cowen’s “back-story” – boarding school, GAA, pouring pints in Cowen’s of Clara (which is shortly to be demolished), then on to UCD and a baby amount of marijuana in the Belfield Bar before twenty-five years in politics – could not be more prosaic.
We should not blame Cowen for not being epic. There is nothing he can do about the principal differences between his makeup and that of his future US counterpart.  They are all too real but they are not Cowen’s fault.

Mandate
The US presidential system entails a system  of caucuses and primaries followed usually by a slog-out with a single main opponent in the general election.

Obama crossed America repeatedly for two years, during which his every foible and quirk was minutely scrutinised.  Barack’s pastor, his wife, and Sarah Palin’s daughter’s domestic deviancy became  worldwide themes. America, indeed the world, knew the President it was getting by the time Obama faced his electorate. He has a rock strong mandate for the change he proposes.

Usually the candidate Taoiseach is known before the election.  Cowen, however, fell into the position without any public campaign or election, after Bertie Ahern anointed him and then resigned. No-one ever noticed who administers communion to Brian Cowen. Nobody paid much attention to his wife’s pride in her country. Nobody really scrutinised his character at all, until now that he has  approval ratings of just 26 per cent in opinion polls. It seems they do not like what they have gotten.

Policies
The US system’s requirement to knock out a range of opponents requires that the candidates differentiate themselves. This conduces to formulation by candidates of clear policies.

The combat that Obama braved against Hillary Clinton and then John McCain required him to articulate clear policies.

The Irish system of proportional representation encourages small parties to be clear and different; and big parties to be unideological and “big-tent” enough  that they can coalesce with whoever is available after an inconclusive election.
Cowen, the Fianna Fáiler’s Fianna Fáiler, stands for very little in policy terms which is also what Bertie Ahern stood for.  And Enda Kenny stands for the same, though lite…

Obama as epic; Cowen as doggerel
Obama is epic because of his background and his trajectory. He has a mandate, policies and a vision. The man has substance.

Then there is also the matter of brute demographics.  A country with 300 million people has a great pool of talent to choose from.  Obama rose to the top of that pool on merit. We cannot blame Cowen that he swam to the top in a shallower pool and so makes smaller waves.

The unfairness of the comparison is most acute because Obama is no ordinary President-elect.  He is something special, unique, chosen by a people driven to desperation by the worst president in history in a time of global economic and environmental crisis.  A man with a special  temperament, an irresistible oratory and a brilliant intellect. The hour came and the man came. Obama is supremely charismatic. As for Cowen, he sort of stumbled into our lives as Taoiseach when everyone was busy spending the last of their SSIAs. He seems workaday, permanently out of sorts [see page 80].

Because of the Beauty Cult Americans usually elect attractive Presidents.  Obama is a good-looking fellow: he has style to add to the substance. Cowen on the other hand looks like a dyspeptic troll. There is nothing he can do about it. Technically it is unimportant anyway.

Most of the reasons for Obama’s ascendancy, it seems, are rooted in the culture and politics of the USA, in his unique background and trajectory, and in his special charisma and aesthetic. But there is also the Vision thing.

Vision
The epic senses make it easier  for Obama to fill the role of   grand visionary. Obama unites the hopes of people of all creeds.  Cowen is, to be honest, irrelevant to them.  No blame attaches.

Obama has an almost  spiritual Vision, of the audacity of hope – that Yes, We Can.

Again let us give Cowen the benefit of the doubt. The biblical rhetoric that plays in Tallahassee may not play in Tullamore. In Ireland we do not do Spiritual.

In Ireland no politician would even attempt to perpetrate so ostentatiously magnificent a Vision as Yes, We Can. It would be regarded as pretentious, perhaps even unmanly. Better something like “arise and follow Charlie” or “a lot done; more to do”.

But US Presidents usually also have both a practical and a policy vision. In the US prospective-President flip-floppers implode early. In terms of his general practical day-to-day impetus Obama is clearly for “sharing the wealth around”, for helping Joe the Plumber on the way up, rather than after he’d made it. Bush was for wars and helping people with a lot of money; and against the environment. Clinton was for the economy, stupid. Like most Presidents, Obama also has not just a practical vision but a full range of finely-wrought and broadly coherent policies on everything from healthcare to global warming.

Cowen has been unable to elaborate a vision at a practical or a policy level. He has only a range of incoherent policies that collapsed when the economy went south.  He waffled on once, and only once, about a vision, which seemed to centre on productivity and – only as an afterthought  – cursorily  to nod to unexciting and half-hearted social and environmental angendas. In the last week he has decided that he is very much in favour of innovative multinationals. But he is still not a visionary.  Not at any level.

He makes it up as he goes along.

What a vision could do for Cowen
Brian Cowen cannot match Obama as epic or for charisma or aesthetics.  And with 26% personal support, the lowest ever for an Irish leader, it is unlikely he will ever match Obama’s popularity.  But, as he scrabbles for traction in very difficult times, perhaps he might turn his busy mind to the possibility that if he followed Obama’s determination to define and popularise a Vision, whatever it turned out to be and however differently it would have to be articulated to comprehend Irish sensibilities, he might at least stake a claim to some respect and a legacy