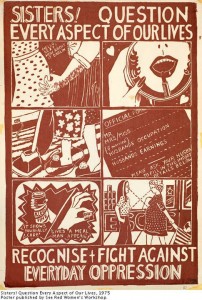 If ever there was a question to raise the hackles on the back of my neck, it is the question ‘Where are all the young feminists?’ A question which is never posed without the accompanying critique that young women simply don’t care about equality or about the path that previous generations of women warriors have beaten down for them. And why does it annoy me so much? Because, in my experience, the critique is simply not true.

Firstly, there are lots of young feminists. Lots! Since the time we (Jennifer DeWan and I) set up Cork Feminista in August 2010, there has been a surge in young feminist groups. As Aisling O Connor of Sibéal says “Feminism is alive and well in Ireland today and there has been a rejuvenation of feminist activism and scholarship in recent years”. For example, there are the Irish Feminist Network, Sibéal, the Feminist Society in NUIG, the new Siren Magazine in Trinity College where the DUGES society also operates and FemSoc in NUIM. And before any of us got started there was the Belfast Feminist Network in Northern Ireland and UK Feminista which was set up by Kat Banyard, author of the Equality Illusion.

Alison Spillane of the Irish Feminist Network points out that “young people in particular seem to be drawn toward the feminist movement”. For me, the problem isn’t that there are no young feminists, the problem is that the myth has been propagated to the point where it is now accepted as fact. The result is devastating – a generation of excited and passionate activists is slowly being made to feel invisible.

Aisling O Connor of Sibéal considers that “The present so-called ‘wave’ of feminism is quieter than those that went before it” and she links this to the fact that many young people are not willing to call themselves a feminist though they still extol a certain level of feminist consciousness.

This is definitely true of many Cork Feminista supporters and many of my own friends. And it is this which is perhaps the divider between feminist generations. Young women often refuse to use the word feminist while saying and doing very feminist things. The sting is that the activists who have gone before often feel betrayed by this and feel it’s an insult to their work and identity. And so begins the vicious cycle whereby established feminists question the activities of young feminists, and they in turn resent being silenced and become even more alienated from the traditional movement.

Does this make the movement quieter? Perhaps. Less effective – not necessarily. The world has changed and activism and protest have changed with it; our generation is simply figuring out our own way of doing things. Online connections, with well-thought-out branding, are our tool of choice to engage young audiences. And it’s working. All of the groups command popular support across social media sites like Facebook, Twitter and their own blogs that get tens of thousands of hits. Yet, for whatever reason, be it that something is not clearly labelled as ’feminist’ or because it doesn’t happen in a physical room, it is often dismissed.

Not only is this disheartening for the thousands who have found a home for their voice online, it also presupposes that this is the only type of activism that young feminists engage in: another myth

All of the groups named hold regular events and activities, organise protests and demos and campaign on feminist issues. In the 20 months that Cork Feminista has been established we’ve had 24 events and spoken at a variety of others. Alison Spillane points out that “young feminists can be found on the streets protesting, for example, against cuts to lone parents and campaigning for long overdue changes to Ireland’s abortion laws”.

Despite all of this great work, I still get asked why the young feminists are not doing anything – more often than not in spaces where emerging feminists should be getting support, like at  National Women’s Council members’ meetings. And it needs to stop.

It shouldn’t be about younger feminists, or older feminists, emerging feminists or established feminists. It should be about all of us focusing on issues and campaigns and learning from each other from a platform of mutual respect.

So I present you with a challenge. To those who have ever wondered where the young feminists are and to my peers who often feel ignored and invisible, remember Saturday 19th May. The Irish Feminist Network is hosting a conference entitled ‘Feminist Activism in Ireland, Past, Present & Future’. It is the perfect opportunity for all of us to bridge the current chasm that has been created by the question ‘Where are all the young feminists?’ I’ll be there. I hope you are too.

Linda Kelly is the co-founder of Cork Feminista and a Director of the Irish Family Planning Association and Hanna’s House Peace Project. @corkfeminista