Despite all the negativity that can whirl around any local authority, much of the remit of Dublin City Council (DCC) is exciting.  But it is not popularly associated with the arts of which – if you include Temple Bar – it is the biggest curator in the country. Most of the accolades go to the Arts council and the Department of Arts.

DCC does not blow its own trumpet but then again it lacks a cohesive overall policy as well as strategy and vision. It has no brand and therefore it fails to benefit from public goodwill that its arts activities could attract. The apex of DCC’s arts structure is the city arts officer, Ray Yeates. The very name betrays the lack of dynamism. Arts officer is oxymoronic, whatever about Dublin City arts officer. Why not have an Arts “Commissioner” as they have in New York?

In DCC the arts are “managed” through all sorts of sub committees, with arts managers and personnel all jockeying for the limelight and constituency favour. Overall responsibility falls in the lap of a Strategic Policy Committee (SPC) but its remit is too broad: Arts, Culture, Recreation and Community. And even worse, and most importantly, there is no suggestion of the balance DCC intends to strike between participative, Community Arts on the one hand and world-class excellence in Art, on the other. These can go hand in hand but usually do not. It is an anonymous rubber-stamp that never challenges, asserts best practice, or holds to account.

The SPC’s endeavours are also paralysed by bureaucracy, the imperative to deal with logistical matters such as the minutiae of parks management and an obsession with the commissioning of long-winded reports full of artspeak and jargon. Any area offering a bit of ould art gets designated a cultural cluster, an emerging arts district or a hub.

Typical is the Parnell Square cultural quarter and the €60m proposed new Central Library at its heart: it fails entirely in its plan to acknowledge the well-established Hugh Lane gallery.

CEO Owen Keegan and other senior members of staff at DCC had no idea of the structures of the companies behind the Parnell Square Cultural Quarter until I did some research and raised the issue with them. Somehow a body called the Parnell Square Foundation (PSF) operating with the philanthropic support of Kennedy Wilson, a major US vulture-capital developer recently come to town, has been charged with the development of the square. It is only recently DCC took possession of the Parnell Square property formerly Coláiste Mhuire owned by the Christian Brothers, which had been handed over to the State as part atonement for their involvement in institutional abuse (Ryan report). It was transferred to DCC by the OPW in a land swap. The plans for Parnell Square notably fail to embrace the State-owned lands surrounding the Rotunda Hospital. A plan by Dublin Civic Trust showing how the space could be opened up as a park to rival Stephen’s Green merely serves to emphasise the limited remit and lack of dynamism of DCC’s approach.

I brought a motion calling on DCC to appoint Councillors to the board of the PSF. Strangely, the Chair of the arts SPC and some territorial DCC staff who serve on the PSF wholly opposed my motion but she lost the argument and the Arts SPC overwhelmingly agreed the motion.

The Culture, Recreation and Community Section spends around €80m annually (2014), of which €9m goes on the arts, and all of its activities should be scrutinised. The Arts SPC proving deficient in this, I have had to resign. I felt that the chairperson, Mary Freehill, was creating obstacles and personalising issues I raised, presumably at the request of senior staff and management who simply don’t want me anywhere near their boards particularly the Parnell Square foundation.

The systemic problems are deep-rooted – underpinned by the usual local-authority problem of the real power residing with management not elected members.

Community beanos are not the same as high culture; and it is possible to be interested in both without caring how the grass in city parks is cut. Dublin City Council receives almost a billion euros annually to operate the city. But there is little accountability and Councillors are loth to haul officials and quangos to account because of the dynamic where keeping officials on board may reward Councillors with the fruits of goodwill the next time they need urgent official attention for a constituent. Even when there is evidence of torpor or impropriety DCC moves slothfully. It took over four years years for Dublin City Councillors and Dublin City Council to act properly over the Temple Bar Cultural Trust (TBCT), which we ultimately replaced. Every step of the way certain Councillors saw fit to protect the cosy cartel of TBCT.

Why do we continue to spend the guts of €200,000 on the literary ‘Impac’ prize, with its strange worldwide-library-led nominations procedure that seems always to throw up Colum McCann? The Impac company no longer exists so we should reconstitute the prize in the name of DCC. 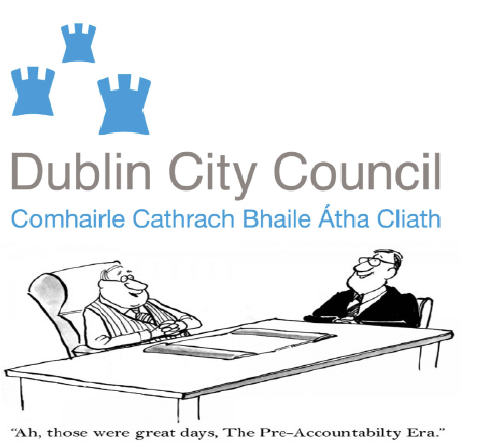 More generally, why do we not claim credit for  our greatest institutions? The DCC logos in the Hugh Lane gallery are actually painted over.

The recent designation as UNESCO city of literature would appear to just have consisted of a whole load of plastic signs being stuck onto buildings. Nothing meaningful has happened and the same familiar celebs and well-thought-of authors and poets have been paraded in and around predictable and over-staged events.

Dublin City Council recently put up for sale two unique mews stables on Dawson Street. According to the Dublin Civic Trust they are the only remaining examples of their kind in the city.  They have been in the charge of Dublin City Council for the past 17 years but have descended into dilapidation – reminiscent of Dublin corporation’s total disregard for the Wood Quay Viking site back in the day.

All this money slushing around while people you know are losing their homes and ending up on the streets. Against this backdrop Dublin City Council is going to spend tens of thousands of euros on its bid for the European City of culture.  In order to be successful in that particular enterprise, they seriously need to up their game and get their act together before their own curtain falls on their own head. God only knows what’s in store for us for 2016 – all they seem to have done so far is throw out €150,000 for various community-based projects like ‘memory gathering’ or ‘re-enactments’, or the reopening of the Richmond Barracks etc. There will be a book on women in the Rising and No celebration of all the artists who were involved in 1916.

The last meeting of the Arts  SPC collapsed into farce after I queried why DCC was paying a large amount of rent to the Ilac Centre. I also wanted to find out why DCC were acquiring expensive art when they had nowhere to put it? And also, why they were building a fake 1930s-themed tenement museum experience in Henrietta Street in a perfectly restored and habitable house when there were homeless families living in appalling inhuman conditions that could easily have been accommodated there instead.

The citizens of the city are, I believe, being seriously let down by the dysfunctionality of this Arts SPC which comprises representatives from outside bodies such as the Dublin Theatre Festival, represented by Willie White, the Little Museum of Dublin represented by Simon O’Connor, the National Council for the Blind represented by Gerry Kerr, the Community Forum represented by Kristina McElroy and the Irish Sports Council represented by Maurice Ahern.When I expressed my frustration and my intention to resign after six years of service they did sincerely ask me to reconsider, but this isn’t possible.