Last month, Minister for Education and Skills Richard Bruton mentioned that “the idea of courses to upskill homemakers were among a number of steps under consideration” to deal with the shortfall of teachers in key subject areas. Calling them “homemakers” may have been correctly gender-neutral, but the issues at stake are not. How could they be, given that women vastly predominate among stay-at-home parents, and among teachers? Why wouldn’t Irish mammies see their role as unpaid child minders extend to the classroom and shouldn’t they be delighted if the government decides to throw them a few euro for doing so?

As a lecturer, activist and member of the Teachers Union of Ireland, I have been struck that the numerous public-service pay agreements over recent years have totally failed to address the relation of gender to the teaching profession. The government, trade unions and the media failed to comment on the fact that since the 1970s there has been an almost total feminisation of teaching in Ireland. According to the Central Statistics Office, women account for almost nine out of every ten teachers at primary level, and more than seven out of ten at second level. In the primary system, you have a 17% chance of being a principal if you are a man, but only 8% if you are a woman.

When a profession or job becomes feminised, there is a correlating depreciation in salaries. This is borne out by researchers such as Emily Murphy and Daniel Oesch, who point out that “in female-dominated professions salaries are lower and it is not only women with children, but also childless women, who earn lower wages”. According to a report by the Primary Education Committee, set up by the Minister for Education and Science in 2003, “There is a strong argument that jobs involving care work have been systematically devalued. For example, teaching and nursing are female-dominated professions while engineering and software development are male-dominated”.

A recently qualified primary or secondary teacher starts on a basic salary of €34,602, rising to €43,292 after five years, and incrementally up to the top of the scale at €64,701. But it takes 27 years to reach this level. By contrast, according to the most recent Morgan McKinley salary guide for 2017, a Dublin-based qualified accountant starts on €45-55K, which increases after three years to between €55K and €65K, and after two more years to between €65K and €70K. A Dublin-based software (e.g. Android) developer can expect to start on €30-40K and to reach €85K after five years.

Over the course of a career, therefore, teachers earn less than other professionals, and they endure incredibly slow career progression and mobility. Moreover, the 27-year incremental scale has since 2012 had a proportionally negative impact on career average pensions. As the teaching profession is dominated by women, what has developed is a system where women are systematically paid less, and where they will be most at risk of income poverty when it comes to living off their pensions.

With such low salaries and lack of mobility and progression, not to mention increasing workloads, men are choosing not to become teachers. When male primary school teachers ten years into the profession were asked in a 2005 survey what would attract more men into the profession the answer most frequently given was “more money (improved salary structure/financial rewards/ promotion prospects)”. The next most common factor was the poor public image of the profession, which seems strange given the level of education and achievement required to enter.

Not only does it take a lot of time to become a teacher, but there are financial expenses too. With the minimum number of years to acquire a primary teaching qualification at four years, and five years for a secondary school teacher (a three-year minimum degree plus two more years), the financial expenses start to mount: a basic degree is €3,000 per year, and the PME costs approximately €10,000. 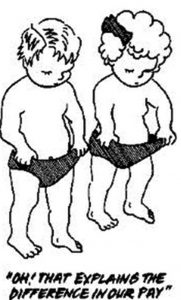 It is outrageous that, despite all this, our educational system does not value teachers and refuses to pay them commensurate with their professional qualifications and expertise. In fact, in the recent talks for the current pay agreement, the government has made it clear that it would rather permanently instate a lower rate of pay for new teachers entering the profession. The message is that teaching is ‘women’s work’ that doesn’t merit fair or equitable pay.

Since the ballooning of state debt that was part of the decision to bail out the bondholders in 2008, all sectors of education in Ireland have suffered severe reductions in funding. At primary and secondary levels, the pupilteacher ratio has increased and moratoriums have been placed on recruitment to posts of responsibility, severely limiting promotional opportunities. Among Institutes of Technology, there was a 35% cut in funding between 2008 and 2015, but during the same period student numbers rose by 32% and full-time academic staff numbers fell by almost 10%. The Further Education sector has also undergone similar ‘reform’.

From the point of view of teachers and lecturers, these cuts have created severe additional workload pressure, all in a context where the new norms of precarious employment status and hourly paid contracts are exacerbating income poverty. Numerous high-profile cases in Irish universities have also highlighted gender discrimination when it comes to promotion. It is no wonder that with increased pupil-teacher ratios and lack of both regular hours and permanent contracts, many young teachers and lecturers are choosing either to emigrate or to leave the profession. Other professional sectors are now seen as a more attractive prospect for educated graduates.

So what is the position of the teaching trade unions and their members in relation to the new Public Service Stability Agreement? The INTO, which is the largest in the sector and draws its members from the primary system, balloted members in June: over 50% of members voted and the proposed agreement was rejected by 89% of them. The TUI, which includes secondary and some third-level members, also rejected the agreement by a similar margin (87%). The other main union, the ASTI, held a ballot just a few weeks ago, and its members delivered a 51.5% ‘No’ vote. The problems of new entrants and pay inequality were central to these rejections.

Given the feminisation of the teaching profession at primary and secondary level, the proposed public-sector pay agreement is without a doubt an economic attack on women. As such, will the teaching trade unions bring low pay and poor terms and conditions as gendered issues to the attention of the Government in the current negotiations?

It is shocking, given the recent divulgence of unequal salaries at RTÉ, and the public and political outrage at gendered pay inequality, that there is not a similar outcry about gendered low pay and inequality in the teaching profession. Do we value education as a public good? Are we willing to pay for a top-class education system? If so, we need to realise that this includes paying teachers commensurate with their professional expertise. If we choose not to, our education system, already broken after a decade of cuts to funding and pay, might never recover. Education as a profession will be so downgraded it will fail to attract the best and brightest of graduates, regardless of gender.

Moreover, it renders any political or public commentary on gender and pay equality mere platforming – style with no substance. And it makes statements about strategic education policy depressingly laughable – statements such as the government’s Action Plan for Education 2017, which has the stated aim of making the Irish education and training system the best in Europe within a decade.

So what is the answer? Invest in education; pay teachers fairly and equitably; improve terms and conditions, including the allocation of permanent whole time contracts; and put an end to pay inequality for new entrants.

Maria Parsons lectures at the Institute of Art, Design and Technology

Founded in 1980, Field Day is a publishing and theatre company dedicated to cultural critique. The Field Day podcast will be launched in the coming months. Pre-launch samples of the podcast can be found at www.fieldday.ie