Village last month reported that Wicklow County Council has agreed to sell a prime town-centre site in Bray to developer Paddy McKillen’s Navybrook Ltd for just €2.6m. The deal is contingent on Navybrook delivering a commercial development by the end of 2019.  It is also a controversial sale that has raised questions about value for money.

Most Councillors and most residents of Bray want the site developed. Known as the ‘Florentine’, it has been vacant for 20 years, but has also served meanwhile as a convenient car park with 225 spaces. A Council official in January told Wicklow County Council that the site is actually worth more as a paying car park than as a development site. “There’s not huge value in this for developers”, he claimed.

But a related effect of the sale of that site to Navybrook is now proving controversial too. For it transpires that Council officials set aside a sum almost equivalent to the Florentine’s sale price to buy and demolish two large inhabited houses at Herbert Road nearby in order to extend another surface car park by up to 100 spaces.

Had Wicklow County Council insisted on 100 more car spaces at the Florentine, it would still have been fewer than had been required as a condition, when planning permission was granted for the Florentine site to an earlier owner.

One previous planning permission for an earlier proposed development on the Florentine site, one that included apartments, had required 417 parking spaces. Wicklow County Council acquired the site at a bargain-basement price during the recent crash. It believes that the Florentine will yield it commercial rates of up to half a million euros annually when completed.

The County Council itself sought planning permission for the Florentine before selling the site to Navybrook. The inspector for An Bord Pleanála pointed out that objectors had stated that the Council was not making sufficient allowance for car parking, with provision being promised for just 256 spaces. The inspector’s report included a statement that applying car-parking standards in the, then-current, Wicklow county development plan 2010-2016 would have meant that “504 spaces would be required”. 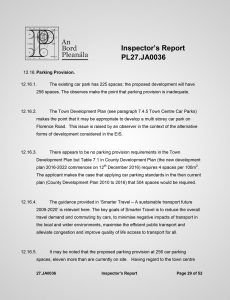 But Wicklow County Council insisted that 256 spaces were enough, and An Bord Pleanála accepted the Council’s assurances. Permission was granted last year.

Just one month later the Council was engaged nearby in private negotiations to buy St Paul’s Lodge and another big house, both adjacent to the existing surface car park on Herbert Road which is an area zoned for mixed use. Local residents were not informed, but the prospective purchasers were told that Wicklow County Council wanted to buy their houses, and that the purpose for which the Council wanted them was additional parking.

The owners first sought €1.5m each (as opposed to the €765,000 valuation that the Council’s own surveyor put on one of the houses last year). In the end, only the sale of St Paul’s Lodge went ahead, for €913,000 including the vendor’s legal and other costs (such as furniture removal to Spain). The Council thus acquired an Edwardian home and large garden that officials hope to clear for up to 47 hard-surface car spaces.
Bray residents (including myself) oppose the Council’s proposal to destroy St Paul’s Lodge, on architectural and social grounds among others, pointing out that it was reportedly designed by the architect of Farmleigh House, and that destroying family homes during a housing shortage pushes up the cost of new homes for everyone.

Hearing rumours of the Council’s wish to destroy part of their neighbourhood, residents tried between June and October last year to elicit information from Wicklow County Council. We were told by the Council simply that, “We are examining all aspects of parking in the town at this time”. In fact Council officials were then intent on closing the purchase of St Paul’s Lodge as quickly as possible.

Council officials concluded the purchase of St Paul’s Lodge unconditionally, despite the fact that it was bought solely “in order to raze it to the ground and build a car park on the site”, as the vendor’s solicitor put it last July.

It is an extraordinary fact of current law that Council officials have great freedom to spend public money on acquisitions without the approval of elected representatives. However, approval is required to demolish or dispose of a building, and the process of securing approval in such a case requires public consultation under a provision known as ‘Part 8’. But what kind of consultation?

In this case Wicklow County Council ignored expressions of concern by local residents and inserted no provision in the contract of sale contingent on Council approval. The Council closed the sale without first completing the consultation concerning possible demolition. This has put Councillors under pressure to approve demolition.

The house could be put back on the market. There is a strong demand for such houses in the immediate vicinity, and at least one older and bigger house nearby (in bad shape) was recently bought and substantially renovated. But the fact that officials paid above what their surveyor considered to be the house’s normal market value could leave the Council out of pocket from any resale.

Residents had their request for a meeting ignored by Council management, and have been forced to take an appeal to the Office of the Information Commissioner to get some documents eventually released that reveal details. The first site notices of planned demolition were not clearly visible from the road and none at all was put on the property of St Paul’s itself. A new notice was published when residents objected.

Bray’s eight local County Councillors agreed to meet Herbert Road residents in early March to hear their arguments why St Paul’s Lodge should be preserved and parking needs met in other ways. But the Fine Gael and Fianna Fáil Councillors from Bray publicly expressed strong approval of the purchase in January, as public consultation only got under way, and residents fear that a Fine Gael-Fianna Fáil axis may dominate the decision when it comes to a vote of all 32 members of Wicklow County Council.

Fine Gael’s Minister Simon Harris and Sinn Féin’s John Brady, both local TDs, oppose demolition. Residents hope that this will make a difference. Stephen Donnelly TD, elected as an independent voice for the area but now a member of Fianna Fáil has not responded to a number of requests from residents to say where he stands on the issue. And residents are pressurising Fine Gael Councillors to side with Minister Simon Harris against the proposal.

In a statement they said: “We held off approaching Councillors outside Bray because we understood there would be time after we addressed the Bray District Councillors”.

They were “astonished when the official who signed the order unconditionally to purchase St Pauls to knock it, an enthusiast for it, District Manager Des O’Brien, indicated that he was drafting the statutory report expected from the County CEO just four days after the deadline for submissions” when they want a deferral of a month for discussions.

They fear they are looking at a fait accompli.

“Is the Council daring residents to take legal action?”, they asked.

Bray is a great location, between sea and hills, well-served by public transport, with bookshops, libraries, theatre and a mix of entertainment venues. But in recent decades the town has seen extremely valuable sites stand empty for years. Badly needed houses could be built on them promptly, but such homes would yield the Council no rates.

The privatisation of premises on Bray seafront, previously owned by the Council and sold for what some critics regard as far too little, has caused controversy too. The future of Bray Wanderers’ Carlisle Ground beside Bray DART station is also worrying residents, who fear that the club’s present owners may be let acquire it from the Council, for other purposes.

In this context, the absence of transparency that for most of last year surrounded the plan to demolish housing on Herbert Road, and the unconditional purchase of St Paul’s Lodge before the statutory consultation process was concluded, are not reassuring.