While property tax distracts from tackling unemployment the slug Berlusconi ruminates on an apotheosis, or a jail sentence – James Nix 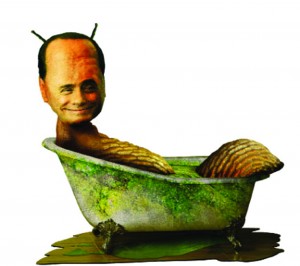 It’s been a tumultuous three months in Italian politics since the election. The morality tale is well-known: spring election was held to return Italy to meaningful democracy after 14 months of rule by dull Mario Monti. Mr Monti had been installed at the EU’s prompting in a bid to solidify Italy’s finances after a sovereign-debt crisis forced philandering spendthrift Silvio Berlusconi to resign in November 2011.

Monti himself fared poorly in the election, gaining 10.5%, not helped by his well-meaning insistence on re-introducing a hated household property tax. After a colourless campaign led by a lacklustre leader, the centre-left alliance spearheaded by Pier Luigi Bersani’s Democratic Party bagged 29.5%. The centre right, led by Berlusconi’s Freedom Party, came in with 29.1%. The real shock was the performance of ex-comedian Beppe Grillo’s 5-star movement which captured 25.5%. Others got 5.4%.

Boosted by a huge seat bonus for larger parties, Bersani would have been able to control Italy’s lower house. But he fell a long way short of controlling Italy’s important upper chamber, the Senate.

The upshot was that Bersani needed to form a coalition with either Grillo or Berlusconi. Bersani’s overtures to Grillo met constant rebuffs and he was never at ease with the notion of dealing with the slug Berlusconi. The uncertainty trundled on through March and into April.

Italy’s 87-year old president, Giorgio Napolitano, then eased things by agreeing to serve a another term in return for the two largest parties committing to “do their duty”, to  stop pirouetting and get on with it.

Bersani resigned after Napolitano’s re-election, and Enrico Letta, second in command of the centre-left Democratic Party was sworn in as Prime Minister on 29 April. Letta appointed Angelino Alfano from the Freedom Party as his deputy. Offputtingly, Alfano is regarded as a loyal protegé of Berlusconi.

Just how loyal was shown in Letta’s inauguration speech. The new Prime Minister promised to make jobs his top priority but he also pledged that the next instalment of the property tax due in June would not be levied, though he stopped short of committing to scrap it.

The property tax was re-imposed somewhat crudely by Monti, relying on out-of-date valuation figures. In a bit of naked vote-buying, Berlusconi had snakily promised during the election campaign to repay what Monti had collected. The tax is in the order of €300 to €400 per average home.

May has seen Letta focus on reforming the property tax – and precious little in the way of job creation. This rankled with protesters in Rome during May.  Like some considerably to the West of the Eternal City, they feel the focus should be on more important matters.

And they have a case. Italy’s unemployment rate is dauntingly high. Nationally, around 2.75m are out of work (around 12%) and, as in Spain, joblessness is most keenly felt by the young with close to 40% of 15-24 year olds out of work. To underline the pressure faced by many ordinary Italians, recent figures from the country’s national statistics agency show that close to 9 million have pared back spending on home heating and buying meat, or both.

Italy’s banks too look more wobbly than before, affected not so much by mortgage debt, but by over-exposure to trading and bond buying, some of it in Italy’s own state borrowing. Its third largest lender, Monte Paschi, has said that its own troubles might not be an isolated case. The bank is looking for €4bn in state loans to plug various holes caused by bond deals and other derivative trades that have turned sour.

Berlusconi retains the power to pull the plug on Letta but any election could see him relegated to the same position as Bersani, pumped up by a majority of seats in the lower house but still unable to govern without the centre left. He also is appealing a four-year jail sentence for tax fraud and a verdict is due in June on his trial for having sex with an underage prostitute. As usual, prosecutors want him banned from public life.

After all his misjudgments how does Berlusconi retain so much influence and 30% of the vote? There is little mystery really. In a country characterised by low newspaper readership and tv fetishism, the media tycoon controls most of what Italians watch. With so many television channels doing his bidding, demonising his political rivals as communists is no problem.

In fact the ‘cult’ of Berlusconi is somewhat overplayed in international press reporting: the reality is that every significant geographic consistuency has a local ‘strongman’, a ‘mini-Berlusconi’ wheeling and dealing in the murky business of political preferment and patronage, and sometimes tantalising with a beguiling bit on the side.

Something else that may hold Berlusconi back is his reported longing to one day be recognised for his Presidential decorum, replacing Napolitano, who is seen as unlikely to serve out a term that runs to 2020.

But to most ordinary Italians this is a narrow game of political intrigue, the preserve of the same people that have ruled Italy for decades. General political and economic disillusion, alongside restricted household budgets, are setting the tone on the strada.