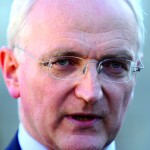 You don’t need to be of a techie disposition or even very green to appreciate a new app called Avego (pronounced Ave, as in Ave Maria). Like all great applications, the idea behind it is ingeniously simple. It’s essentially a car-pooling app that puts drivers in touch with those seeking a lift, using the convenience of smartphone technology. If you consider the success of the Dublin Bikes scheme and of the taxi app Hailo, you would have to believe that this new app is a sure-fire winner. I was so impressed that I wanted to meet its creator, a man called Seán O’Sullivan, an American now based in Kinsale.

I have to confess that I knew little about Seán O’Sullivan’s background except, vaguely, that he was a panellist on a TV programme called Dragons’ Den, a role for which he is ideally suited, having experienced the rough and the smooth of business in many start up ventures over the years.

While we talk, he casually mentions that he was the person who coined the term ‘Cloud Computing’. This is not an idle boast. It happens to be absolutely true, as my subsequent research revealed.  He foresaw how Cloud Computing could redefine our communications and media, the way we conduct business, the worlds of music and film. The man is a visionary. Think Steve Jobs – without the monstrous ego.

His own humble beginnings in Upstate New York taught him from an early age the need to preserve resources and above all else not to waste anything. That applies to time, energy, and opportunities. He started off in the 1980s developing geographical information systems which led to the concept of desk-top mapping, a precursor to Google maps. This in turn led to the development of the Avego app.

He was inspired to develop the app after living in LA.

“Back in the 1990s I was living in Los Angeles and I was living in the traffic. Even then it was unbearable with one person in each car with eight or ten lane highways. There was no end to delays and the frustration. The quality of life is so low in that environment, and yet the waste is so high. As an engineer I asked myself one question: ‘how do you avoid waste?’”

He watched as the technology developed and knew his opportunity had arrived.

“The technology reached a point with GPS. It was apparent that this area would blossom. That it would be easier to book a ride with a guy passing in a car than it would be to book a flight. Now the costs have come down and everyone is carrying around computers in their pockets. They’re always connected now. This enables us to automate a  car journey that costs a few dollars  – you can automate that in the same way as you can automate a journey that costs hundreds of dollars when you fly”.

The Avego app certainly addresses the problem of the single-occupancy vehicle, but given the high volume of commuter traffic in Ireland, why isn’t the app more popular?

He gives two reasons for this, the main one being that they haven’t really promoted it here in Ireland yet. The other reason is that new technologies always take time to bed down, as he knows from experience.

The Avego strategy is to build ‘critical mass’, in certain cities throughout the world. They are currently concentrating their efforts in San Francisco, Santa Barbara, Washington DC and Bergen in Norway. They also run it on a small scale here: in the Kinsale/Cork area mainly. Worldwide they are growing at a healthy twenty per cent a month. One interesting fact to emerge from their research is that the average commute here in Ireland is the same as that in the car-reliant USA: 17 miles, a statistic which says a lot about the poor state of planning in this country.

Avego is satisfied it has dealt with all relevant security and insurance issues. Having passengers in your car is not only more social and environmentally sustainable, it is also statistically safer. The driver also gets a monetary contribution, which works out at around a euro for the first kilometre and twenty cents per kilometre thereafter. And Seán O’Sullivan is convinced that there will be many new users in the coming years.

Avego is an unstoppable force.

John Gormley is a Contributing Editor of Village