Stephen Boyes is on the run from the Police Service of Northern Ireland (PSNI). He is flitting between hotels and the homes of friends across the border. He claims that he is in danger of arrest and imprisonment because he is refusing to cede control of 110 acres and other land he claims he owns near his family home in Moira, county Down.

On 5 January, police officers assisting bank-appointed receivers arrested his children William and Laura at their house on Glenavy Road, Moira; and held them overnight in Musgrave Street Police Station in Belfast before releasing them on bail the following morning.

It was the latest in a series of heavy-handed police raids and the latest development in a bizarre sequence of events that has forced Stephen Boyes to leave the jurisdiction and his wife Doreen and children.

The most notable and visual feature on the lands bordering counties Down and Antrim is Maghaberry jail which sits on 140 acres and, over recent decades, has housed political and criminal prisoners in conditions of high security.

The Boyes claim that they own the 140 acres on which the prison is located, through a legal trust and the surrounding 110 acres which their family has farmed for generations. Their formidable opponents who refuse to accept their claim of ownership include the Northern Ireland Department of Justice, the Prison Service and the PSNI.

The family also claim that their quest to establish their proper ownership of the Maghaberry lands and those on which their family home sits a mile away in Moira have been frustrated by among others:

Allied Irish Bank (known as First Trust in NI) and assorted solicitors, auctioneers, receivers, and members of the judiciary in the North.

To follow the intricate history of the long battle by the Boyes family to retain control of these land holdings and properties, it is necessary to go back to the last century: the early 1940s and the Second World War.

In 1941, the Boyes family owned 340 acres of land at what is now the site of Maghaberry jail of which 270 acres was acquired through compulsory purchase order by the British government for an RAF airfield. The US air force provided the necessary aircraft, pilots and troops to operate the base and provide cover against German aerial attack.

In 1957, Edward Thomas Boyes, grandfather of Stephen, purchased the 270 acres back from the State with full title. Three years later, in 1960, and just three years before his death, Edward Boyes appointed two of his nephews, Arthur Eddie Swain and James Morrison Swain as trustees over the land while conferring life tenancy on his son, Brian Boyes.

Brian Boyes built a house and grazed cattle on the land and his only son, Stephen, was born there in 1962 and was to inherit the property on his father’s death in April 2000. Stephen Boyes grew up with the Troubles and was twelve years old when the Maze internment camp and prison outside Lisburn, just two miles from his home, was burned down in 1974.

In 1974, the Prison Service announced plans to build a new high-security jail on the site of the former Maghaberry Airfield and, despite local objections and following a public inquiry, the land, including the Boyes family home, was acquired under a vesting order.

A total of 270 acres owned by Brian Boyes and an adjoining 46 acres owned by his brother, William, were taken over by the prison service for two proposed adult prisons to house both men and women including criminal and political prisoners. A plan to construct a detention centre for young offenders on the site did not proceed. In compensation for losing control of much of the land the trust, through the Swain brothers, was paid £285,000 by the NI Ministry of Finance in 1979 in a deal brokered by solicitors A S Merrick and Sons of Wellington Place, Belfast. Stephen Boyes claims the Trust to have retained the freehold interest in the lands.

When Brian Boyes heard of the paltry compensation for the loss of his 270 acres he complained bitterly to the firm’s Robin Merrick who assured him that, notwithstanding the compensation payment, which was for ‘use’ only, the land remained in the possession of the Trust which retained the freehold. Boyes purchased a house and farmyard on 14 acres on the airport road at Moira and continued to graze cattle on the remaining 110 acres at the airfield site which were not occupied by the new jail.

In 1988, the Swains were replaced as trustees by solicitor Robin Merrick and an accountant, Frank Ledwidge. In 1994, Stephen Boyes approached the Prison Service seeking to purchase 170 acres of land which he was farming around the jail.

Informed by Merrick that the purchase had to be made to the Trust, Boyes paid Robin Merrick £1.4m for the 170 acres of land (including his uncle’s holding) around Maghaberry. After completing the purchase and getting title of the airfield lands, Boyes went on to sell a portion of the land to two developers in 2001. They built houses on the 47 acres they purchased for £2m.

Boyes retained ownership and title of 110 acres and borrowed £850,000 from First Trust (AIB) with a view to obtaining planning permission for commercial development on 20 acres of the land which would have increased its value to around £8m. By 2007, he had built two warehouses on another portion of the former airfield land with full planning permission.

The planners devising the Belfast Metropolitan Area Plan agreed informally in March 2008 to zone the 20 acres for commercial use.

However, according to Boyes, the bank agreed not to call in the borrowings until the Metropolitan Area Plan for greater Belfast area was agreed by the local council. Under the proposals for the plan it was envisaged that the 20 acres of the airfield land would be zoned for commercial development, considerably enhancing its value and allowing repayment of the loan plus interest. It would also have left Boyes with a site worth several million pounds.

In March 2012, however, the then Minister for Justice, David Ford, announced detailed proposals for a new prison, at a projected cost of £140m, to be built on lands beside Maghaberry jail in order to replace the ageing Magilligan prison near Derry.

Almost immediately, AIB appointed Colliers International as receivers over 100 acres of Boyes land in order to recover the £850,000 debt owed to the bank.

This prevented Boyes from selling the land, which had spiralled in value due to the planned prison project. He also suspected the appointment of receivers was designed to ensure that he was removed as an obstacle to the plans of the Department of Justice.

Boyes obstructed Colliers when, as receivers for the bank, they sought to take possession of the land, by blocking gates and refusing them access to the land.

In April 2014, Colliers sought again to gain possession of the land and once again they were refused.

In June 2014, the receivers issued legal proceedings along with the bank before Judge Donnell Deeny. However, the hearing was adjourned after Boyes allowed the plaintiffs access to the land for surveying purposes on condition that he received 48-hours notice of their request to enter the property. Judge Deeny made a later order in September granting right of way over the land to the Northern Ireland Office in order to construct a road access to and from the prison.

However, when the case for enforcement of the possession order resumed, in December 2014, Judge Deeny recused himself on the grounds that he was a customer of First Trust (AIB). 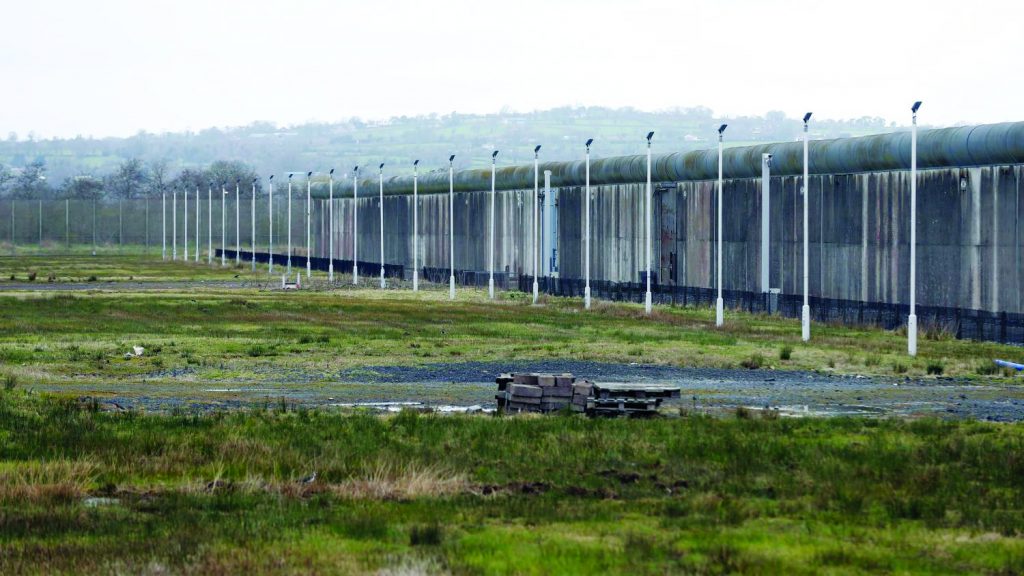 Similarly, Justice Mark Horner, not for the only time, (see Village magazine October 2017) also stood down from the case after he replaced Deeny in order to avoid any perception of potential conflict of interest.

In March 2015, Justice O’Hara also ruled that Boyes give possession to AIB and the receivers of the 110 acres at Maghaberry and a further 12 acres adjoining his family home. In April 2015, Boyes moved to have his wife and daughter appointed as trustees over the lands, including the family home as one trustee, Robin Merrick, had left the jurisdiction over ten years previously and the other was deceased.

The ruling by Judge O’Hara was appealed by Boyes to a three-judge High Court on the grounds that some documents presented by the bank and receivers contained a signature which purported to be his, but which he claimed was forged. He also claimed collusion between the prison service, Colliers and AIB in their effort to collapse the Trust and reconstruct clean title over the lands.

The judges, Sir Declan Morgan, John Gillen and Reg Weir dismissed the appeal, in November 2015 clearing the way for the possession and, if necessary, eviction of Boyes and his family.

In September 2016, and on foot of the High Court orders against Boyes, an attempt was made by local agents, the McKavanagh Brothers, acting for the receivers and accompanied by PSNI officers, to take possession of 12 acres of land and buildings beside his family home.

In January, 2017, a dozen armed officers arrived in two police land rovers and broke down the back door of his home from where they removed three legally held firearms and ammunition. This was followed an hour later by an Enforcement of Judgments Officer, protected by no less than 20 police officers. seeking to serve an eviction notice. Helped by neighbours and friends, the Boyes managed to get the unwelcome visitors off his property.

A month later, on 26 February, Boyes claims that he came upon a group of men seeking to remove horses and cattle from the lands at Maghaberry Airfield. They said that were acting on behalf of receivers, Keenan Corporate Finance, and local estate agents. In May 2017, 30 PSNI officers and 20 private security guards occupied the 110 acres. His wife and son, William Boyes, were arrested during the raid on the land. William Boyes was subsequently charged with assault.

Following the incident, Stephen Boyes and his other son, Edward, moved over the border and out of the jurisdiction where they have been living between hotels and the homes of friends ever since.

The land was subsequently purchased, in May last year, by energy company, Lightsource, which obtained zoning for commercial use on the 110 acres. The directors of Lightsource are Nicholas Boyle with an address in Saintfield, County Down on the outskirts of Belfast and Conor McGuigan, also from the city. McGuigan was a senior planner with Belfast City Council up to his retirement in 2010.

Last month, on Saturday 6 January, William and Laura Boyes appeared before the court in Belfast following their arrest the previous night at the family home. They were charged with “aggravated trespass” following a raid by up to 40 police officers and were remanded on bail. They are due to appear at Lisburn Magistrates Court on Friday 2 February. William Boyes is due back in court on the assault charge on 5 February. The PSNI has informed the National Crime Agency that it is investigating the allegations made by Boyes of collusion, conspiracy to defraud and the attempted theft of lands known as Maghaberry Airfield.

A spokesman for Lightsource told Village that:

“Lightsource purchased the land for the Maghaberry Solar farm from receivers, Keenan FC, appointed by the charge holder, AIB Bank UK. The purchase was agreed following a competitive process. Lightsource bought the land to develop a solar farm”.