A documentary called ‘Cowspiracy’ is currently doing the social-media rounds. In time it could have an influence comparable to Al Gore’s ‘An Inconvenient Truth’ as the devastating impact of animal agriculture and fishing is laid bare. ‘Cowspiracy’ takes aim at how prominent environmental organisations, including Greenpeace, fail to bring this number one cause of climate change and biodiversity loss to the public’s attention. The sources of funding for environmental organisations are also questioned and the powerful reach of the animal agriculture industries highlighted.
Another Cowspiracy seems to operate in the medical community where unwillingness to engage effectively with the crucial importance of diet, especially the observed benefits of plant-based approaches in terms of longevity and incidence of pathology is apparent. A host of epidemiological studies, notably the Oxford Vegetarian Study in 1999, have shown that those on plant-based or largely plant-based diets live longer and have lower disease risk including of cancer.
Yet, despite this being well established in the peer-reviewed literature, there are few peer-reviewed studies on the link between cancer and diet.
In the absence of hard evidence those who advocate  plant-based nutrition as a form of treatment are dismissed as charlatans. It’s a scenario that suits the pharmaceutical industry that funds most research.
Recently John Kelly a Dublin-based general practitioner of long-standing was inspired by T Colin Campbell’s ‘The China Study’ to take matters into his own hands and encourage cancer patients to adopt plant-based diets. He developed an informal study of cancer patients who he persuaded to adopt that diet, and has just written a book about it. He claims: “Rigorous adherence to the diet showed extraordinary results; those who lapsed suffered relapses and declined in health”. 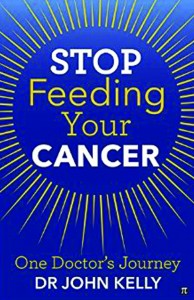 Kelly will be criticised for failing to incorporate peer review in his methodology, leaving him and his work open to the imputation of cherry-picking data for ideological reasons.  But there is no indication that Kelly is an ethical vegan using the false promise of long life to persuade people to stop killing animals. Indeed, at one point he suggests that eating fish does not have the same carcinogenic effect as consuming meat, dairy and eggs.
Moreover Campbell himself pointedly avoids describing himself as a ‘vegan’ preferring instead to advocate a “whole food, plant-based approach”. Campbell used animals for laboratory experiments which Kelly refers to in passing, without comment.
Indeed the data which Kelly finds so compelling are derived from trials conducted by Campbell using laboratory rats, in which two groups were infected with cancer. The first group was given a diet comprising 20% animal protein. They all promptly died. But the second group was given a diet of only 5% animal protein, and all survived. Campbell performed these experiments after observing a lower survival rate among affluent human cancer patients who had diets high in animal products compared to their impoverished peers, in the Phillipines. In the laboratory Campbell also found that vegetable proteins did not promote cancer, even when eaten in very large amounts.
Kelly might also have engaged with a greater range of research in the field, notably a recent study by Dean Ornish showing that the growth in the number of prostate cancer cells was related to the consumption of animal products. He could also have explored criticisms of the ‘China Study’.
For his own cancer patients Kelly found that “rigorous adherence to the diet showed extraordinary results; those who lapsed suffered relapses and declined in health”. Some patients found the conversion too difficult, and tragically died. He did though discover that it did not have a beneficial effect on cancer of the pancreas for reasons he explores.
Surprisingly, according to Kelly: “The main obstacle to patients given the diet on trial is the fact that no support has been forthcoming from the cancer specialists”. Worryingly he notes: “When patients mentioned the fact that they are considering the diet to their specialist they are routinely told that they are wasting their time”.
Kelly attempted to bring the contents of the book and his own research to the attention of specialists but was rebuffed. He argues that: “The minds of cancer specialists were so cluttered with their pharmaceutical and surgical obligations that they were unable to accommodate critical revisionary thinking”.
He also acknowledges that “Persuading patients suffering from cancer to eliminate animal protein from their food intake is especially problematic in Western countries, where dairy and meat are very much a part of the diet”. He admits to a paradox where “the fact that our favourite food is also the favourite food of cancer cells doesn’t compute”. On the other hand he also found that many of his patients were perfectly happy with the new regimen. This coheres with Campbell observation that over time an individual’s taste will change after adopting a 100% plant-based diet.
But Kelly still sees a place for current cancer treatments. He writes: “When my patients query the value of medication in a general sense I always remind them of the time-tested benefits of sound pharmacology”.
Of course if the state medical authorities accepted the argument that a whole-food, plant-based diet is indeed the best healthcare policy this would have huge repercussions for the powerful agricultural lobby.
But Kelly warns Simon Coveney et al: “change happens whether one likes it or not; so, perhaps far better to be driving change than burying one’s head in the ground like the proverbial ignorant ostrich”. Irish agriculture may be producing increasingly obsolete foodstuffs for sale in affluent, educated countries that will be the first to jettison them. Recently the huge American healthcare provider Kaiser Permanente adumbrated that: “Physicians should consider recommending a plant-based diet to all their patients”.
The Cowspiracy attests to the difficulty for individuals even those in the healthcare or environmental sectors to make profound dietary change. Until individuals empathise with the pain and suffering of other animals this may well be insurmountable. History suggests that simple taboos, such as not eating meat on a Friday, are what prevent people from eating particular foods, not rational argument.
If you were to offer a hungry person human flesh most would decline it. A dietary taboo such as veganism will prevent an individual from countenancing consumption of a dead animal or another animal’s secretion. Many would not relish consumption of what they had themselves killed or even seen killed.
The pity is that mainstream environmentalists, dieticians and medical practitioners do not embrace this conundrum, for the moment. •